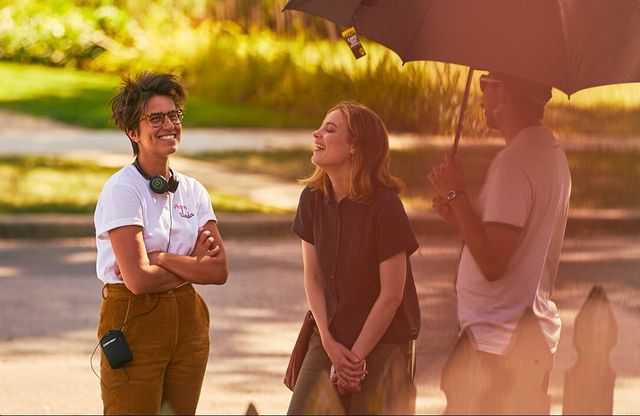 Heartfelt and hilarious, Kris Rey’s forthcoming film I Used To Go Here explores a young woman’s self-perception and feelings of failure in a way that balances both humor and heaviness. The film follows a writer named Kate (played by Community’s Gillian Jacobs) who returns to her alma mater to promote her new novel. Steeped in nostalgia for her college days, Kate falls in with a peculiar group of undergrads and attempts to rekindle a connection with her former crush, a sordid English professor played by Flight of the Conchords' Jermaine Clement, while grappling with her identity as a writer.

Excerpt from I USED TO GO HERE premiering tonight- ChiTown Movies Drive-In Theater- w/ live Q&A w/ Kris Rey! "[Jacobs'] ability to hone in on the awkwardness of each and every situation finds just the right note of humor to make you not only laugh, but also connect with her. pic.twitter.com/qqnaqXqFK0

With an impressive production team—including the Lonely Island trio of Andy Samberg, Akiva Schaffer, and Jorma Taccone—and cast, I Used To Go Here is a bit of a departure from Rey’s previous films. Her origins as a writer and director stem from independent micro-budget films such as her unscripted 2009 debut, It Was Great, But I Was Ready To Come Home, and 2015 Sundance film, Unexpected. In this way, I Used to Go Here is a film of ‘firsts’ for Rey: her first delve into comedy, her first film with a more commercial edge. However, the funniness of the film is delivered with Rey’s hallmark authorial imprint: texture and naturalism.

This past week, I joined Gillian and Kris on a Zoom session to hear about their thoughts on the film and their experiences with comedy.

What is it like to release a movie during quarantine?

Kris: The absence of being able to see it in a packed theater is new, and I definitely feel that absence. But, I was texting Gillian last night because the movie premiered in Chicago at a drive-in theater last night. So I packed my kids in the backseat and went to the drive-in theater--which is like a pop-up, a drive-in theater that didn’t exist before. We sold out both screenings, lots of people were there, there was a Q&A after that they put on the big drive-in movie theater screen, and everybody honked. It was really so special and cool.

Take me through the journey of creating this movie. How did it come about?

Kris: The story was inspired by my own experience taking my last feature, Unexpected, around to universities when it came out in 2015. I didn’t have nearly the weekend that Kate has in the movie, but I did feel this really interesting irony, or something, where I saw myself in my own career and where these students saw me. You’re in this kind of bubble and it is this kind of ego-massage. At the time, I hadn’t experienced anything like that and I could see how that could be intoxicating to someone and that they would just want to stay in that. So, that’s what inspired the idea behind the movie. And then, Gillian and I met and she read the script and it seemed like she liked it, haha—or she pretended she liked it. We had a really good conversation.

Gillian:  I had read Kris’ previous script and loved it, so when this one came along I was really excited. I thought that it was a character I really wanted to play, and I thought she created a really fun world. And I think that she and I both related to the idea of hitting a point in your life when you start to have friends that are significantly younger than you and what that means. And also nostalgia for a time in your life, which is sometimes about not wanting to deal with the present. 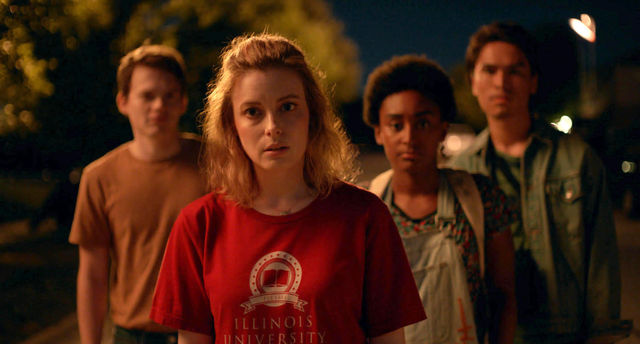 What drew you to this character in particular?

Gillian - I felt like I understood what she was going through in that she had these expectations for what this moment in her life was going to be, both professionally and personally and none of it was working out. Who was she? And what was she devoid of, either professional success or personal success? What does she actually want to do? And, I have a very low bar for scripts which is that they don’t make me feel sad about being a woman. Sadly, it’s hard to find things that fit those criteria. I felt like this was just such a great part: a three-dimensional human being who was funny and flawed and all the things I look for in a character.

This movie is definitely a departure from your other films. What inspired you to delve into comedy?

Kris: I think real life just has so much of it. With a few exceptions, all of the comedy I do is really naturalistic and feels really human. It does feel just like—Oh, my god. Can I tell you guys something? Last night at this drive-in, I ran over a big orange cone with my car. Like, ‘Thanks so much for coming you guys,’ and slow-drove out of this fucking drive-in dragging an orange cone, just like, waving. How embarrassing? Anyways. Real-life has all of these things. Embarrassing, and funny, and silly really. My attempt in my writing is to make it feel real like it could really happen.

Gillian: You’re reminding me, I had this movie that premiered at the Berlin film festival a couple of years ago that was like, a really big deal for me. I had never been in a movie that actually made it to theaters before and it was like a competition and had a gala premiere. You know, we dressed up and after the film, the directors invited the whole cast up. And I completely fell on the stairs walking up on stage and my shoe fell off down several flights of stairs. And I just completely fell in front of the whole audience that had just watched me. It really just is—life is a series of events like that.

What advice do you have for younger girls who are interested in creating comedy?

Kris: I think my advice right now is not to wait around for permission from anyone and to just fucking do it. Being an indie filmmaker and coming from a very small DIY beginning, I think women are more often than not—and this is changing, I hope this is changing—are sort of taught or made to believe that they have to wait for someone to give them to go-ahead, and they have to follow the rules of the game in order to get where they need to get to be successful. I think that’s a little bit of what Kate is struggling within the film, like ‘But I checked all the boxes, and I did all the things. Why have I not achieved what I thought I was going to achieve?’ I’m constantly learning this in my life: it’s just like, fucking do it, you know. I think that these young women should just fucking do it.

What do you hope audiences take away from this film?

Kris: First of all, I hope people have a good time. I hope that they relate to the movie and the characters and can take away this message of embracing vulnerability and accepting failure and move forward from it.

Gillian: Yeah, and that I think the character has put so much pressure on herself that maybe not other people have put on her, and that part of the reason she’s feeling so happy and like a failure is because of expectations she’d created for herself. And there is this part of it that’s true, that students see her and think that she is cool and successful and that if she could start to let go of some of those expectations of what’s supposed to have happened by this time that she could be happier.

Is there any last note you want to mention about the film?

Gillian: I hope that people watch the movie and if they like it, tell your friends to watch it too.

Well, friends, I urge you to watch it. While we wait for its big release, check out the trailer: