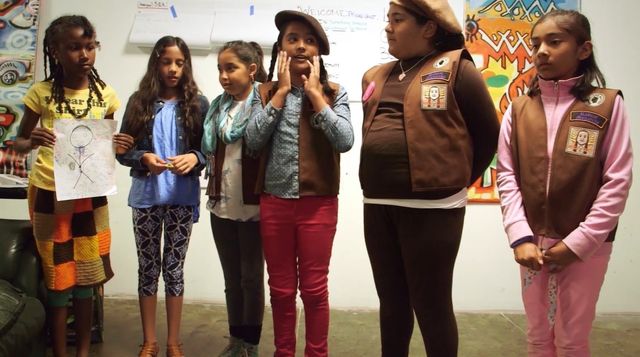 Right now the future is so uncertain, but if nothing else it most definitely is in the hands of Black and Brown girls.

Monday night, PBS POV, in its 33rd season, aired the 2019 documentary We Are Radical Monarch. The documentary showcases the humble beginnings of the Radical Monarchs—formerly Radical Brownies—an Oakland-based, social justice and service alternative to the Girl Scouts.

The film opens with newscasters stating Latinas have a lower rate of graduating high school than any other major subgroup and that Black girls are viewed as more adult and need less protection than white girls, setting the tone as to why the need to center Black and Brown girls in safe spaces is so imperative.

Adorned in brown and purple vests and berets, an obvious nod to the Black Panthers and Brown Berets before them, the inaugural Radical Monarch troop started off with 12 girls ranging from 8 to 13 years old. The documentary follows the troop the first three years manuevering through the Ferguson Protests incited by Mike Brown’s murder to the campaign trail and eventual presidential win of Donald Trump. The latter being a very direct threat to themselves and their immediate community.

While building fierce sisterhood bonds, the troop learns and completes social justice units like Radical Pride, where they are understanding the LGBT+ community, from gender identity, expression, and assignment, as well as sexual orientation. In the unit, Martinez explains the difference from transgender women and drag queens, by citing both Janet Mock and RuPaul, explaining how Mock identifies as a woman and how RuPaul performances as a woman, giving validity to both people. The unit was rounded out by participating in Trans March in San Francisco. Other units include Radical Roots, Radical Bodies, Black Lives Matter, Radical Coding, Pachamama Justice. Upon completion of each unit the troop is awarded a beautifully stitched badge and a ceremony. 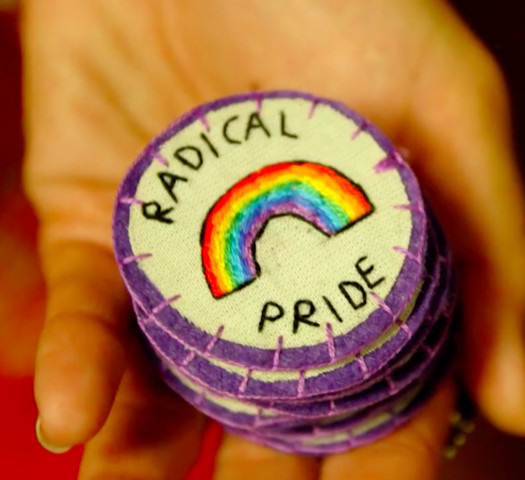 Founded by BFFs and community organizers Anayvette Martinez and Marilyn Hollinquest in 2014 as a direct response to Martinez’s daughter’s desire to join the local Girls Scout troop. Martinez felt her daughter would be best served to be involved in a troop that not only reflects her experience as a girl of color, but also actively centers it. And who better than the dynamic duo of Martinez and Holliniquest? Martinez and Hollinquest met while obtaining graduate degrees in ethnic studies, both identify as queer, and even share the same birthday (literally same day, same year).

As expected, the biggest obstacle to the Monarchs is the system. That includes Martinez and Hollinquest maintaining full-time jobs in addition to finding resources and running the troop. The troop even attended Oakland City Council meetings to endorse the Renter Protection Act to fight gentrification. And not so surprisingly, a clip of the Radical Monarchs speaking out about white cops killing unarmed Black people aired on FOX News. The troop was met with hate from the left, deeming the Radical Monarchs as “little racists” calling the teachings from the adults in charge as “irresponsible indoctrination.” Blech.

Nonetheless, the documentary is such a timely and heartwarming reminder that though there is still so much work to be done, the Radical Monarchs are already in flight.

header image still from We Are The Radical Monarchs

Oakland’s Radical Monarchs Are Brownies With An Activist Twist