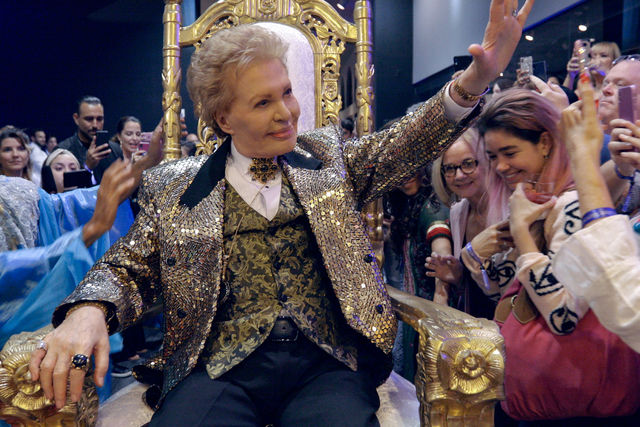 Breaking gender roles and norms, famed astrologer Walter Mercado is a Pisces Sun, Aries Moon, and a household name for Latinx and Hispanic communities all across the world. Serving big jewels, big capes and big hair, Mercado stars (no pun intended) in his own documentary, Mucho Mucho Amor: The Legend of Walter Mercado.

Released July 8 and directed by Cristina Costantini and Kareem Tabsch, Mercado’s role to stardom and fame is just one side of him. The documentary explores his childhood, how he as a young boy brought a bird back to life with just his breath, up to him studying dancing and acting, which would eventually fuel his performance and allure. All of this led up to a starcrossed fated day where he landed a job as a televised astrologer for a popular Puerto Rican network.

Nothing like this had been ever seen before: a man dressed lavishly in bejeweled capes of colors, jewelry so bright and beautiful, with such charism and performance, wearing make-up that defies gender and age. Seen as androgynous, when it came to his sex life and sexuality, he proclaimed passionately, “I have sex with life, I have sex with the wind, with the breeze.” As LGBTQIA activist Karlo Karlo comments in the film, “Growing up as a queer boy and watching Walter Mercado gave me hope. I saw Walter and said I am not that different.”

He captivated audiences. What made Walter Mercado so special was the abundance of positivity that radiated from him. He was the star — no, he was the Sun. A larger than life personality, the documentary illustrates a man born to bring heaven on stage and on camera.

The documentary is filled with old tapings of his shows and interviews from family and personal friends such as Willie Acosta, Mercado’s longtime friend and assistant telling the tale of Walter Mercado. We even get to see Hamilton playwright and actor Lin-Manuel Miranda meeting him for the first time. Celebrating puertorriqueño pride, we see Miranda trying on Mercado’s sequined cape that dawns the Puerto Rican national flag.

Walter Mercado graces us through the documentary of snippets of his personal life. His morning routine putting on makeup, car rides — his private life shared, not a spectacle but a tender moment of real humanness that celebrity stardom rarely eclipses to the audience. We also see some of his downfalls, where his former business partner, Bill Baklus, contracted him to sell the rights to his name and image. After a long, court-fueled six-year battle, eventually Mercado won the rights back to him and his name.

We come towards Mercado’s final years, to his return to celebrate his exhibition of his life and career at TheHistoryMiami Museum in Miami, Florida. With footage of his arrival in a gold-encrusted throne, Walter Mercado is celebrating with family and friends and beaming with joy. We also see Mercado come to a new chapter — coming to accept death and life, and speaking to Univision’s own Jorge Ramos about reincarnation. Walter Mercado passed at age 87 in San Juan, Puerto Rico in November 2019.

Mucho Mucho Amor: The Legend of Walter Mercado illustrates how Mercado’s influence goes beyond astrology. From memes, pins, shirts, bathroom wallpapers to cocktails, Walter Mercado represents an attitude, a way of knowing. His show is a cherished memory that millions of people share. Walter Mercado is also a cultural icon for the younger generation today.

With a whole lot of love and a whole lot of glam, Walter Mercado touches hearts from across all over the world. His influence is still present, his legacy lives within communities that spent their time watching with families and abuelitas or even just resonate with him regardless. There’s one thing for sure: Walter Mercado left us with mucho mucho amor. And who’s to say — maybe there will be a biopic in the future. According to a New York Post interview with director Cristina Costantini, he once suggested Timothée Chalamet play him. Llamame de tus Estrellas, anybody?

Tags: Walter Mercado , Puerto Rico , Latinx , Netflix , astrology , documentary
Support Feminist Media!
During these troubling political times, independent feminist media is more vital than ever. If our bold, uncensored reporting on women’s issues is important to you, please consider making a donation of $5, $25, $50, or whatever you can afford, to protect and sustain BUST.com.
Thanks so much—we can’t spell BUST without U.