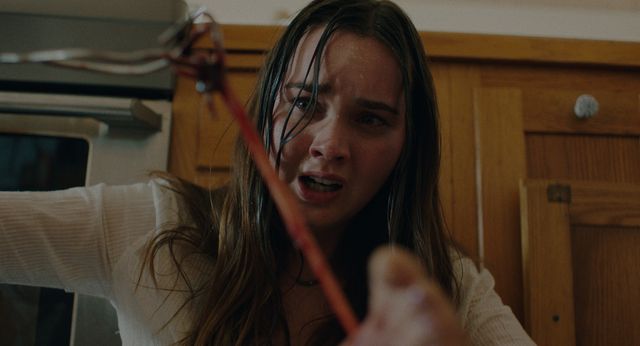 Combining ecological mystery, body horror, and feminist energy, The Beach House offers a whole new take on the ‘final girl’ trope. This horror flick follows two young lovers whose seaside getaway takes a turn as a parasite infiltrates their sleepy beach town, leaving them on their own to find a way out. Adding to its edge is the film’s timely portrait of abandoned homes and empty beaches – a sight that is spookily reminiscent of summer 2020, COVID-19 style.

The film stars Liana Liberato as Emily, a college graduate and aspiring astrobiologist whose self-reliance and passion for science may be the only thing that saves her. A Texan with a penchant for strong female roles, Liberato has been working professionally since she was nine years old. She wormed her way into our hearts with her performance in Trust, and then wooed us in The Best of Me, and later spooked us in Hulu’s Light as A Feather. In The Beach House, however, Liana takes on a new persona as a woman in horror who is determined to figure shit out, with or without her lover. On July 9, the day the film dropped on AMC’s Shudder, I spoke with Liana over the phone about her role in The Beach House.

Watching The Beach House amidst COVID-19 definitely felt a little close to home. Do you think that viewers will find it much more relatable than you expected when you were filming?

Yeah, absolutely. I watched it recently, too, and I was like “Wow. It’s kind of ahead of its time.” Yeah, we filmed this movie I think three and a half years ago and to us, it was a just really interesting story or idea that Jeff had written and it’s crazy to think there are a lot of sort of realistic facets to this story now.

Speaking about everything that’s going on – what have you been up to in quarantine?

Well, I’ve tried to do a couple different things – but, yeah, it hasn’t been too bad. I feel like as an actor, I’m already living a quarantine lifestyle because I mean, I work mainly from home until I go on a job. I think doing auditions and meetings and stuff at home is a little different but other than that, I’m just reading scripts or studying lines. And, I started sewing – which makes me sound like I’m 80 years old – but I used to embroider things when I was younger. I just really loved how meticulous it was. And so, I picked that back up. I really enjoy that. I’ve been doing a lot of writing as well, which has been a nice creative outlet for me as well.

Emily’s character in The Beach House is not your typical ‘final girl’ – she studies organic chemistry and wants to go to graduate school for astrobiology. I was wondering, are you interested in science? What was your process for getting into character for Emily?

I actually am so bad at school. I think that’s why I liked it so much initially, because I was like, “Wow, this is so not the person I am,” and it felt like a really interesting challenge for me. Yeah, you’re right—she isn’t like your typical ‘final girl.’ I mean, not that ‘final girls’ aren’t really smart, but that was very much highlighted in her attributes as a woman and I thought that was really interesting that this girl like, literally, carries the person that she loves on her shoulders for the whole movie.

The Beach House is not your first experience with horror—we also get to see you as McKenna in Light as a Feather. I’m interested in your take on horror in general, as a genre. What do you like about it? What don’t you like about it?

I was initially very afraid of scary movies and I got really angry at myself for not liking them, so I forced myself to like them. I was like, “Okay, I’m going to watch all the classic horror movies and I’m going to work my way up to like the present day.” I watched Rosemary’s Baby and The Shining and worked my way up and really did fall in love with the genre. I really just kind of look for interesting characters. That’s sort of something I’ve always been into. I like really strong female roles. Specifically, with Light as a Feather, I was surrounded by a lot of strong women — like female characters on the show — and that was really enticing to me as well. I’m so glad I got to do that because I met some of my best friends on that.

Is there any certain story or role you’d like to portray in the future?

Okay. This might sound, like, a little crazy. But, a long time ago I was thinking to myself, are there any female serial killers? Does that exist? And, of course, I saw Charlize Theron in Monster, which is an incredible performance where she does play a serial killer—but I remember Googling ‘serial killers,’ and almost every article was like, ‘Women aren’t really serial killers because women are more like crime of passion people, or they’re very emotional so they’ll act in rage or love or passion and so they’ll only murder once.’ And I was like, “Well, that’s bullshit.” Not all women are just pigeon-holed into this one crime of passion place, and so I feel like—whether it was fiction or nonfiction—it would be really cool to play a female serial killer.

The Beach House is streaming now on AMC Shudder.

Tags: Liana Liberato , The Beach House , horror , movie , Horror
Support Feminist Media!
During these troubling political times, independent feminist media is more vital than ever. If our bold, uncensored reporting on women’s issues is important to you, please consider making a donation of $5, $25, $50, or whatever you can afford, to protect and sustain BUST.com.
Thanks so much—we can’t spell BUST without U.