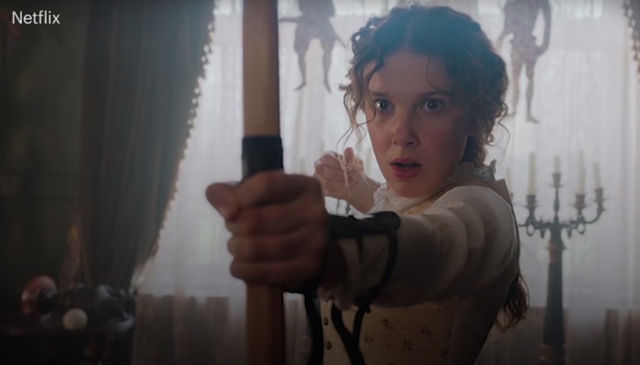 The estate of Arthur Conan Doyle, writer of the iconic mystery series, Sherlock Holmes, is suing the upcoming Netflix Original movie Enola Holmes, for depicting the famous detective as yes, you read that headline right, a feminist. The estate argues that the film’s portrayal of Sherlock Holmes as kind, caring, and respectful of women is a direct violation of the deceased author’s copyright.

Wait a minute, so the Conan Doyle estate is suing Enola Holmes simply because they don't want to see a world in which Sherlock Holmes is empathetic towards women? Well, not exactly. But the case is still incredibly strange. The film, slated to come out on Netflix in September, stars Stranger Things’ Millie Bobby Brown as the titular Enola Holmes, the younger sister of Sherlock and Mycroft Holmes. Based on the 2006 young adult book series by Nancy Springer, the story follows the teenaged Enola as she investigates the mystery of her missing mother, even outwitting her talented detective brother at times. Conan Doyle Estate LTD, who are suing Netflix, the film’s U.S. producers, Springer, Penguin Random House and others, argue that Springer’s writing of the detective as well as Henry Cavill’s portrayal of him in the upcoming film go directly against his character in the original novels. Here’s where things get a little confusing: It’s not exactly because Springer wrote Holmes as kind and respectful, per se, but because the Sherlock Holmes stories that are currently up for grabs under the public domain describe Holmes as nothing of the sort. "While Sherlock Holmes is famous for his great powers of observation and logic,” the case filing against Netflix and Springer states, “he is almost as famous for being aloof and unemotional.”

Early Sherlock Holmes stories, which were written in the late 1800s to early 1900s, are now available in the public domain, meaning anyone can adapt the tales in any way they choose. There was, however, a set of Sherlock Holmes stories written after World War I which did, in fact, depict the infamously cold detective turning into a softer, more understanding person. This later set of stories is still under the authors copyright, which is what led the Conan Doyle estate to file this case against Enola Holmes. The estate argues in the case filing, "[T]he Springer novels make extensive infringing use of Conan Doyle's transformation of Holmes from cold and critical to warm, respectful, and kind in his relationships...Springer places Enola Holmes at the center of the novels and has (Sherlock) Holmes initially treat her coolly, then change to respond to her with warmth and kindness."

This, however, is not the first time Conan Doyle LTD is attempting to sue a woman author for violating copyright. Back 2014, they tried and failed to stop author Laurie R. King from writing stories about the fictional Mary Russel, a woman detective who is inspired by an interaction and friendship with Sherlock Holmes. This leave a lot more to unpack. There have been dozens of book, film and television adaptations of Sherlock Holmes over the years. Some of the most notable that come to mind are the1980s The Adventures of Sherlock Holmes TV series, the 2009 and 2011 Sherlock Holmes films starring Robert Downey Jr., CBS's Elementary starring Lucy Lui as Watson, and of course, BBC Masterpiece Theater’s television series, Sherlock. While the 1984 television series stuck to portraying Holmes as a cold and unemotional detective, it is difficult to discern if the same can be said about the later adaptations of the stories. Unlike the present situation and the Laurie R. King case of 2014, the estate of Doyle never sued those productions despite the fact that they took their fair share of liberties in adapting Holmes into a much more likable and respectful man.

Basically, this whole situation leaves one making deductions as to why the only two times the Conan Doyle estate sued Sherlock Holmes adaptations involved women who wrote about women detectives and their relationships with Holmes. Elementary, my dears. Elementary.

This Fall, We’re Getting A Brand-New “Nancy Drew”