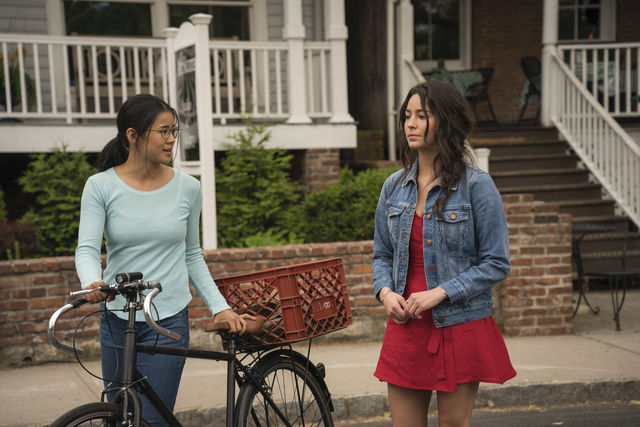 With Pride Month coming to a close, you might be looking for some movies to watch. Too often, even when it comes to LGBT stories, we see white men and women directors overrepresented; women of color are often overlooked when it comes to directing and the LGBT community as a whole. We compiled a list of 16 LGBT movies directed by women of color that you can enjoy this Pride Month — and beyond.

Dee Rees’s feature-length debut, Pariah, follows the journey of Alike (Adepero Oduye), a Brooklyn teenager coming to terms with her lesbian identity. She feels like she cannot come out to her parents (Kim Wayans, Charles Parnell) so she has to embrace her identity quietly and in secret from her family. Alike’s mother, worried about Alike’s image, makes her befriend a colleague’s daughter (Aasha Davis) and they strike up an unlikely relationship. Through the movie, you see Alike come to terms with her sexuality and her family. Pariah is available for rent on Amazon Prime.

3. Professor Marston and the Wonder Women (2017), directed by Angela Robinson

Professor Marston and the Wonder Women is about the creators of the iconic comic book character Wonder Woman. The movie details the relationship between Dr. William Moulton Marsten (Luke Evans) and his wife, Elizabeth (Rebecca Hall), and their mutual lover, Olive (Bella Heathcote). The film depicts their relationship and how the character of Wonder Woman came to be through their polyamorous and unconventional relationship. Professor Marston and the Wonder Women is available to stream on Hulu.

Alice Wu’s feature-length debut portrays the story of Wil (Michelle Krusiec) who is still in the closet to her widowed mother (Joan Chen) and her grandparents. Throughout the movie, Wil learns that her mother also has some secrets of her own which leads to her moving in with Wil. The film depicts the strain of this relationship between Wil and her mother, and Wil and her openly gay girlfriend (Lynn Chen). Saving Face is available for rent on Amazon Prime.

Margarita with a Straw is an Indian film that shows the story of Laila (Kalki Koechlin), a woman with cerebral palsy who goes to New York for school. The movie focuses on her adjustment to living in New York and without her parents, along with her falling in love. It touches upon issues of the intersection between the LGBT community and the disabled community, along with themes of inclusion and self-acceptance. Margarita with a Straw is available to watch for free with ads on Tubi or for rent on Amazon Prime.

Bessie is a biopic about iconic blues singer Bessie Smith. It explores her life as she goes from a struggling singer to a successful and household name. The biopic portrays her life and also her relationship with both women and men, as Bessie Smith was bisexual. It is a fascinating movie to watch to see what this iconic blues singer’s life was like. Bessie is available for streaming on Amazon Prime or HBO Max.

Lovesong follows the relationship between Sarah (Riley Keough) and Mindy (Jena Malone) who were once best friends. Sarah is a lonely stay-at-home mom who is being neglected by her husband, so she calls her best friend Mindy to go on a road trip with her. As the road trip progresses, their relationship intensifies, only for it to end abruptly. Three years later after little contact between the two, Mindy invites Sarah to her wedding. Lovesong is available to stream on Netflix.

Rafiki is a Kenyan film that shows the romance that grows between Kena (Samantha Magutsia) and Ziki (Sheila Munyiva), set in Nairobi. The film shows the struggle the two girls have once their parents and others find out about their relationship. Rafiki touches upon the issues of LGBT rights in Kenya and themes of familial and political pressure. Rafiki is available for rent on Amazon Prime.

D.E.B.S. is a unique spy movie from Angela Robinson that depicts the relationship between Amy (Sara Foster), a top student at a spy academy, and a notorious villain, Lucy Diamond (Jordana Brewster). The film follows them as Jordana keeps on committing crimes in order to spend time with Amy, and their journey as they fall in love. D.E.B.S. is available for rent on Amazon Prime.

Fire is an Indian-Canadian film that portrays two women, Sita (Nandita Das) and Radha (Shabana Azmi), who are stuck in loveless marriages with Jatin (Javeed Jaafei) and Ashok (Kulbhushan Kharbanda). Sita and Radha are on similar paths and, when they notice this, they grow closer, and their relationship blooms more than they would’ve even thought it could.

Circumstance tells the story of an Iranian teenager, Atafeh Hakimi (Nikohl Boosheri), as she discovers her sexuality and enters a relationship with a woman. The movie also depicts Atafeh’s brother’s fascination with Islamic fundamentalism which leads to the collapse of his relationship with his sister. The film depicts Iranian culture and coming-of-age in a new way. Circumstance is available for rent on Amazon Prime.

Call Me Kuchu is a documentary that explores the LGBT community in Uganda and its struggles. (“Kuchu” refers to the Swahili word that’s used for gay people in Uganda.) The film heavily focuses on the murder of David Kato, a Ugandan teacher and LGBT activist. Call Me Kuchu is available to watch for free with ads on Tubi or for rent on Amazon Prime.

In Between follows three Palestinian girls, Layla (Mouna Hawa), Nour (Shaden Kanboura), and Salma (Sana Jammelieh) who are all living in the same flat at Tel Aviv. It depicts their journey as they struggle with the inequality of Israeli society and the rule-bound Arab world. It also shows them coming into their own and their desire to be their free selves. In Between is available for rent on Amazon Prime.

A Girl at My Door is a Korean film that follows Lee Young-nam (Bae Doona), a gay police officer, who is sent from Seoul to a remote village where she gets involved with and tries to protect the life of Do-Hee (Kim Sae-ron), a teenager who is being abused by her family.

The Half of It portrays shy and introverted student, Ellie Chu (Leah Lewis), who is recruited by Paul Munsky (Daniel Diemer) to write love letters for a girl he likes, Aster. The movie shows the friendship between Ellie and Paul, along with Ellie’s feelings towards Aster, the recipient of the letters. The Half of It is available to stream on Netflix.

Tags: LGBT movies , LGBTQ+ , women directors , LGBT
Support Feminist Media!
During these troubling political times, independent feminist media is more vital than ever. If our bold, uncensored reporting on women’s issues is important to you, please consider making a donation of $5, $25, $50, or whatever you can afford, to protect and sustain BUST.com.
Thanks so much—we can’t spell BUST without U.