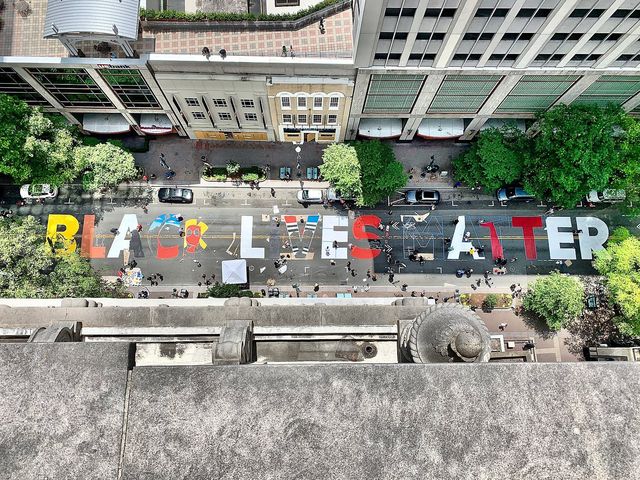 A couple days ago, BUST recommended 10 movies and documentaries about racism and police brutality that white people have to watch to educate themselves on the issues surrounding the Black Lives Matter protests that are taking place globally. And while many companies, like Netflix, are trying to address the issue by compiling a list of black movies and shows together to highlight Black History and achievements, there is something that must be discussed.

During the week of June 4, The Help was one of the most watched films on Netflix. As Candice Frederick so eloquently put it in her article for O Magazine, “Many are watching in order to gain an inkling of self-awareness about racism—one that doesn’t also force them to recognize their own participation in white supremacy.”

Movies like The Help and The Blind Side star, mostly, white women that “help” black characters in their film succeed. They are the white saviors. In Hidden Figures, a movie about the brilliant black women who helped NASA launch an astronaut into space, there is a scene where Kevin Costner’s character, in a grand gesture, takes a crowbar and destroys the sign for the Colored Restrooms and says, “No more Colored restrooms. No more White restrooms…Here at NASA, we all pee the same color.” And while this is a powerful moment, it never happened in the book or real life and it completely overlooks the way Katherine Johnson took her own stand against Segregation.

This narrative of a helpful white man or woman savior was built into so many movies about racism for white people to see a more simplified version of racism and discrimination that they can comfortably move on from after watching.

So, for a more accurate view of Black history and protesting, here is a list of 10 more documentaries white people need to watch that are not The Help:

Director Spike Lee's 1997 documentary tells the story of the 16th Street Baptist Church Bombing through archival footage and new interviews. On Sunday, September 15, 1963, a church in Birmingham, Alabama, was bombed by four members of a Ku Klux Klan-affiliated racist group. Four black girls, Addie Mae Collins, Denise McNair, Carole Robertson and Cynthia Wesley, between the ages of 11 and 14 were killed in the blast. This film explores a pivotal moment in the Civil Rights Movement that sparked national outrage. Lee’s documentary is available on HBO.

I Am Not Your Negro (Amazon)

Nancy Buirski’s HBO documentary The Loving Story is about the marriage, arrest and case of Richard and Mildred Loving. In 1958, the Lovings were arrested for violating Virginia's anti-miscegenation laws, eventually leading to a landmark U.S. Supreme Court decision on interracial marriage. This film shows the impact of racist laws like anti-miscegenation laws and the way they were fought. And, considering June 12 marks the landmark court decision for interracial marriage, it is a very important watch for today. This documentary is available with HBO.

Award winning director Stanley Nelson chronicles the inspirational story of American Civil Rights activists' peaceful protest against racial segregation on buses, trains and in restaurants in the 1960s. This important part of history, which is oftentimes overlooked, emphasizes the struggle against Jim Crow laws in the south and highlights the similarities with the protests today. Freedom Riders is available on PBS.

The Kalief Browder Story is about a 16-year-old black boy who spent three years in Rikers Island jail awaiting trial (two of which were in solitary confinement) after being arrested for allegedly stealing a backpack. The charges were eventually dropped but Browder committed suicide after his release. The Kalief Browder Story focuses on the injustices in the justice system and what American liberties are and who they really apply to through first-person accounts, archival footage and re-creation of scenes. This heartbreaking documentary is available on Netflix.

Robert May explores the case of a judge who received millions in kickbacks for sending young offenders to prison for minor crimes. This documentary shows the faults and corruption in our justice system. Kids for Cash is available on Amazon.

Award winning director Ava DuVernay chronicles the history of racism, discrimination and inequality in America, focusing on the fact that the nation's prisons are disproportionately filled with African-Americans because of a loophole in the 13th Ammendment after the abolishment of slavery. 13th is available on Netflix.

Director Sabaah Folayan explores how the killing of 18-year-old Michael Brown by a Ferguson police officer inspired a community to fight back and started a global movement. Whose Streets? shows how the community and the Black Lives Matter movement peacefully protested which the government and police responded with militarization and violence. The Ferguson protests have a lot in common with the protests in Minnesota. This documentary is available with Hulu.

Directors Joe Brewster and Michèle Stephenson follow their son and his best friend through the American educational system. Though both boys start out at the same private school, later one is forced into a public high school. This documentary that spans 13 years highlights the drastic gap in education that dramatically and discriminatorily affects African-American boys at all socioeconomic levels across America. American Promise is available with Amazon.

Header image via WikiCommons courtesy of the Office of Congresswoman Alma S. Adams.