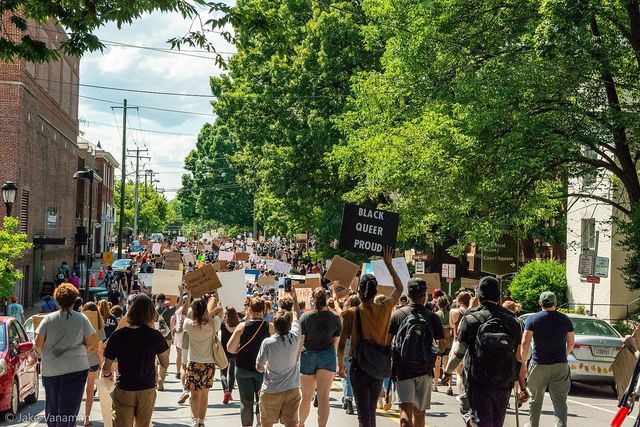 More than ever, it is important that we amplify black voices without overshadowing them. Allies have to do so much more to further ourselves not just as not racist but as anti-racist. Joining the protests and donating bail is helpful, but we must also actively educate ourselves on the issues at hand. To start, here are 10 documentaries and movies that can help teach more about racism and police brutality in America:

1. Selma (YouTube)
Just to see how little has truly changed, you should first watch the film Selma about Dr. Martin Luther King Jr.’s march from Selma to Montgomery to try to get President Lyndon B. Johnson to sign the Voting Rights Act of 1965. Although the Civil Rights Act of 1964 had legally desegregated the South, there was still widespread discrimination and King’s march on Selma was met with extreme violence by residents and police officers. Directed by Ava DuVernay, this film is available for rent on YouTube.

2. Strong Island (Netflix)
This award-winning documentary follows director Yance Ford as he investigates the murder of a 24-year-old Black man and the injustice his family faced. It is a particularly hard film to watch as it is revealed that the young man, William Ford Jr., is Yance Ford’s brother. It is available to stream on Netflix.

3. Fruitvale Station (YouTube)
Directed by Ryan Coogler and starring Michael B. Jordan, Fruitvale Station is a biographical drama about the 2009 death of Oscar Grant, a young Black man who was pinned down and shot in the back by BART Police in San Francisco at Fruitvale Station. This movie is available for rental on YouTube.

4. 16 Shots (Hulu)
16 Shots is a Showtime documentary directed by Rick Rowley that examines the Chicago Police Department's cover-up of the murder of Laquan McDonald. In 2014, McDonald, age 17, was killed by officer Jason Van Dyke. The documentary is available for streaming on Hulu.

5. The Blood is at the Doorstep (YouTube)
Directed by Erik Ljung, this documentary is about the death of Dontre Hamilton, an unarmed black man with schizophrenia who was shot 14 times and murdered by the Milwaukee police. The Blood is at the Doorstep follows Hamitlon’s family as they fight for answers during the investigation. This movie is available for rental on YouTube.

6. The Death and Life of Marsha P. Johnson (Netflix)
The Death and Life of Marsha P. Johnson explores both the life of a famed LGBTQ+ activist as she fights for the rights for trans women and her suspicious death in 1992. While her death was considered a suicide after she was found floating in the Hudson River, many believe she was murdered for her work as an activist and because she was a Black trans woman. Directed by David France, this documentary features many prominent figures of the gay rights movement and is available for streaming on Netflix.

7. Frontline Episode: Policing the Police (PBS)
A crucial episode in PBS' documentary series Frontline is “Policing the Police,” which aired in 2016 and addresses police brutality and racial disparities in America's law enforcement system. The episode goes behind the scenes of the Newark Police Department, a police force that has been ordered to reform, and examines allegations of police abuse and how to fix a broken relationship with the community. This episode is available for streaming on the PBS website.

8. 3 ½ Minutes, 10 Bullets (HBO)
When Michael Dunn, a 45-year-old white man, shot Florida teenager Jordan Davis because he was playing his music "too loudy" in his car, the case made national headlines and started a conversation about racial prejudice in Florida. Director Marc Silver explores the murder, Dunn’s trial, and Florida’s “stand-your-ground” gun laws, which were used as Dunn’s defense. This documentary is available for streaming with HBO or Hulu.

9. Atlanta’s Missing and Murdered: The Lost Children (HBO)
This 5-part HBO docuseries directed by Sam Pollard, Maro Chermayeff, Jeff Dupre, and Joshua Bennett is about the killings of at least 30 Black children and teens in Atlanta between 1979 to 1981. It follows the case from the first deaths of two teen boys to the arrest and imprisonment of Wayne Williams, who was found guilty of murdering two adults and connections to the murders of 10 children. This case is especially unsettling when you see the way fear gripped the city and how law enforcement were resistant to help. This series is available to stream with HBO.

10. Say Her Name: The Life and Death of Sandra Bland (HBO)
Say Her Name is about the arrest and suspicious death of Sandra Bland, a 28-year-old Black woman who was taken into custody for a traffic violation in Texas. Three days later, she was found dead in her cell. Although her death was ruled a suicide, there were many immediate allegations that she was murdered. Directed by David Heilbroner and Kate Davis, this documentary follows Bland's life, death, and case that became a rallying cry for activists all over America. This HBO documentary is available to stream with HBO or Hulu.

Tags: black lives matter , george floyd protests , selma , strong island , fruitvale station , 16 shots , the blood is at the doorstep , the death and life of marsha p johnson
Support Feminist Media!
During these troubling political times, independent feminist media is more vital than ever. If our bold, uncensored reporting on women’s issues is important to you, please consider making a donation of $5, $25, $50, or whatever you can afford, to protect and sustain BUST.com.
Thanks so much—we can’t spell BUST without U.