Details
BY Georgia Dodd
IN Movies
Published: 27 May 2020 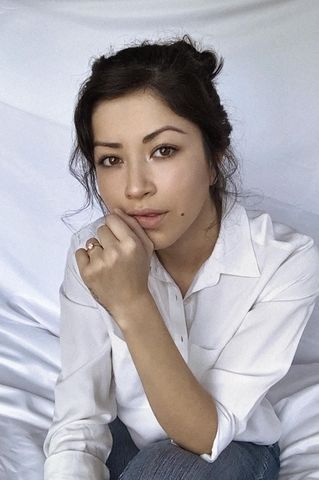 This beautiful TV movie drama, directed by Danishka Esterhazy, received incredible reviews and many went to social media to show their support of the movie that Bobbitt herself executive produced. Like the rest of us after watching I Was Lorena Bobbitt, Montalvo had a lot to say about the way Bobbitt was treated by the media during her trial. This film is especially needed now with COVID-19 quarantining, where a lot of people do not have a safe home to stay in.

Montalvo spoke with BUST over the phone about playing such an infamous role in American history, the #MeToo movement, and changing the way the public views the Lorena Bobbitt case.

Tell me about I Was Lorena Bobbitt.

So, I Was Lorena Bobbitt is about an innocent, naive 19-year-old girl who marries what is to be her abuser. She lives a life of trauma with him, and the media turns her into a villain for it. And, I think we're doing this movie now so that we can give this narrative back to Lorena so that she can tell it and describe it in her own words and how she wants to through her own lens. I'm quoting her when I say that she wants this to be very transparent and raw.

What pulled you to this film?

I felt like if I could be a part of something so much bigger than myself like this, you know? This isn't a fictional character, this is someone who's actually out there making a difference with what happened to her. This is an opportunity and an experience that I don't think I would get anywhere else. So, I was a little apprehensive and scared when I joined for the project, just because I was asking myself, "Am I ready to dive into this emotionally terrifying role?" I was honest with myself. I was very honest with myself. And, yes, I was ready and I felt like I wanted to take on this challenge to prove something to myself. I feel like I have a responsibility as a woman to try and help other women in any way possible, as much as I can.

How is this role different from any other that you've played?

Well, for starters, this role is my first lead role in a film even if it's a TV movie. Before this I did mostly commercial work and a lot of you know, smaller co-star roles, still on known networks, but again, you know, nothing compared to the size of this.

What was it like to play such a iconic character in American pop culture history—a character that America was obsessed and still kind of obsessed with?

I felt empowered constantly, especially to have Lorena there on board and on set with me for a couple of days. It gave me that extra confidence that I didn't know I needed. It showed me what women are capable of and everyday I was more and more proud and happy to be a woman and to be able to share this story with everyone.

What was it like working with Lorena Bobbitt as executive producer on this project?

It was very surreal because before meeting her I did a ton of research on her. I watched a lot of footage, hours and hours of interviews and an Amazon documentary she has. So, when I finally got to meet her, I felt like I had already known her. I felt like I had just missed her, you know? I was just missing a part of me. So, we instantly connected and I'm so grateful that she was there on set because that made me feel a lot better about the choices I was making, because I knew that if she had absolutely anything to say, any feedback, that she could come to me and we can talk.

Was there anything that you learned about the famous case while filming?

Yes, I didn't know about Battered Women's Syndrome. I mean, I hadn't heard anything about her story. So when I researched all of it, I did learn about what domestic violence victims go through, or survivors what they go through, and that this is an actual syndrome that people get from being abused for so long or over time. That the choices you make, they just become impulsive and you don't have control over them. So that really, really blew my mind. I didn't know someone can be so hurt and so abused to the point where they have no control over their actions.

Do you think this film will change the way that this case is viewed by the American people?

I sure hope so. I actually think it will, because this story is coming from Lorena's mouth. This is her story. She's telling it the way she wants to without the jokes, without the media turning her into a villain. I think people are going to see this with a different perspective, especially now during the #MeToo movement and everything. They're going to see this and realize how wrong we did her almost 30 years ago. And, I think they're gonna want to support her now more than ever.

How do you think it will be viewed through the lens of the #MeToo era?

It's such an important movement and for this film to come out during this time, I don't think there's any better time for it to be premiering. People now are listening to women. Maybe we're not believing all of them, but we are listening. We are listening to their stories, we are trying to support them, we are realizing that a lot of women have this horrible, awful thing in common. And during this time, especially with the pandemic happening, not everyone is safe at home, not everyone has that safe place to go to. So, I think if this movie starts any sort of conversation, I think that's just a step in the right direction. Even if it's just a friend to a friend, you know, a friend watches a movie and they realize, "I've noticed some of these signs among my friends," if they reach out then the goal of the movie has been achieved.

Do you think a lot of people will relate to or sympathize with Lorena after watching this film?

Statistics show how many women and men in the United States go through this every day. I think a lot of people are going to realize, "Hey, my story isn't that much different from hers."

Did you learn anything about yourself as an actress while filming this film?

Oh my gosh, yes! I definitely did. I learned so much about myself, and what I was able to personally handle, and I learned what the best way was for me to get in and out of those dark places so that I wouldn't take it home with me so that I'm not sleeping with his negative energy. I learned that I'm very capable of handling many different emotions at once and let it slide off me at the end of the day.

What do you hope to accomplish as an actress in the future?

I hope, honestly, just to simply connect with people through the screen. If somebody can watch any of my work and say, "Hey, me too! Or, I agree. Or I feel the same way," then I'm done.

I Was Lorena Bobbitt premiered May 25 and is available to stream on Lifetime. Check out the trailer below.