Details
BY Georgia Dodd
IN Movies
Published: 26 May 2020 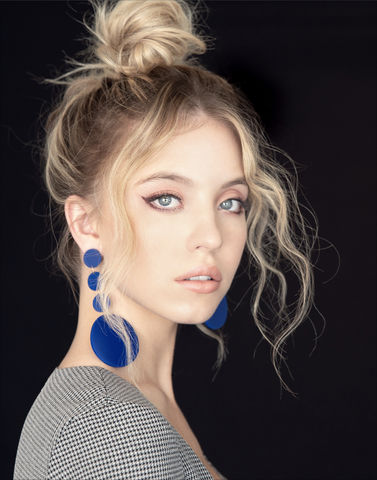 If you need a heartfelt Indie flick to watch during quarantine, we suggest you start with Clementine.

Sydney Sweeney stars in Lara Gallagher’s directorial drama debut Clementine with Otmara Marrero. As we’ve seen time and time again in works like Euphoria, Sharp Objects, and Once Upon a Time in Hollywood, the 22-year-old from Washington is a powerhouse performer. In Clementine, Sydney plays Lana, an impressionable young woman who tries to start a relationship with an older woman searching for refuge at her ex’s lake house. The chemistry between Sweeney and Marrero, paired with Gallagher’s direction, really brings this film together.

Sweeney spoke with BUST over the phone about her new indie film Clementine, career highs, and the goals she hopes to achieve as an actress in the future.

How would you describe your character, Lana, in Clementine?

Lana is a girl who lives in a small town who dreams of moving to L.A. and becoming an actress, but she gets caught up in the wrong crowd and she starts to pretend she's somebody else.

I heard that when you take on acting roles you research and sometimes create books for your characters. Did you do anything like this to prepare for your role in Clementine?

I make my books for every single character. So, I made a cute little friend book for Lana.

What attracted you to this film?

Well, I love Indies. I think that indies are definitely a special place in our industry for upcoming actors and filmmakers and a great learning space. And I thought that the script had a beautiful image when you were reading it. There was so much in between the lines that I wanted to play with.

Was it fun filming Clementine?

It was. It was filmed in Florence, Oregon, which is a beautiful little town. Me and OT (Otmara Marrero) became very close and we're still friends today. So, we had a lot of fun.

What was it like working with Lara Gallagher and Otmara Marrero?

[They're] both very talented, wonderful women. Definitely forces to be reckoned with. OT is just so much fun to play with and find different things in scenes that aren't really there. We really just take our time with each other and allow our characters to play off of one another without even planning it which is such a beautiful thing. And, Lara is an amazing filmmaker. I mean for this to be her first thing is incredible and it was really cool watching her bring her story to life and seeing her learn in the process.

Did you learn anything about yourself as an actress while filming?

I learned that even if the lake is freezing cold, I'll still get in it!

Do you think a lot of people will relate to the message in Clementine?

I hope so. I think that there's definitely a message for everyone. And, I think that if you're able to see the underlying messages and the beauty in the film then you'll find something for yourself.

What do you think was the main message that you got away from the movie?

I think it's to love yourself.

What do you think about the ending of Clementine without giving away any spoilers?

Without giving away any spoilers, I think it's a great way to bring everything back full circle.

Do you think that you will start in more indie films in the future despite your success in works like Euphoria and Everything Sucks?

I think that if the story is powerful and meaningful, and I am attracted to the character, then there's definitely a possibility that I will do it.

Do you ever worry about being typecast in the future?

What do you hope happens to Cassie in season two of Euphoria, if you can give anything away?

I cannot give anything away, sorry!

If you weren't an actress, what would you want to do?

What has been your favorite career moment so far?

There's been so many in the past two years, I mean, from being able to work with Quentin Tarantino and Brad Pitt and Leonardo DiCaprio all at once was absolutely mind-boggling. Euphoria has definitely been a high for me as well as Handmaid's Tale. Literally the past few years has been a career high for me.

What do you hope to accomplish as an actress in the future?

I hope to be able to continue playing diverse characters, and working with extraordinary filmmakers and actors and growing friendships, relationships and making more meaningful projects for the world.

Clementine was released May 8 and is available in virtual cinemas. Check out the trailer below.