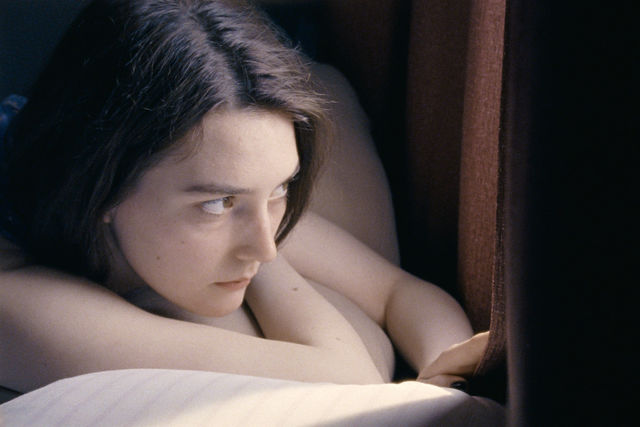 “Did it hurt?” asks Skylar (Talia Ryder) after her cousin Autumn Callahan (Sidney Flanigan) finally gets an abortion. She says it didn’t.

It’s one of the last moments of dialogue in Never Rarely Sometimes Always, the latest film by writer and director Eliza Hittman, and the exchange sums up a key part of the story: the abortion at its center is far from being the film's most dramatic or emotional plot point. When Autumn, a 17-year-old living in rural Pennsylvania, discovers she’s pregnant, she quickly learns she has limited options in her hometown. She can’t confide in her mother (Sharon Van Etten), and the only reliable clinic in her area turns out to be a crisis pregnancy center. In an arresting scene, she attempts to give herself an at-home abortion, but to no avail. Ultimately, she and Skylar take to New York.

Of course, even when the cousins make it to the city, it’s still not that easy. Because the procedure takes several days, they’re forced to sleep at bus terminals and on the subway. When they run out of money, Skylar decides to call up Jasper, an over-eager, borderline pushy suitor from the bus (Théodore Pellerin); the three flit around the city in the middle of the night before Skylar ultimately asks to borrow funds. At each step of the way—on the subway, at an arcade with the young man, at more than one abortion clinic—Skylar and Autumn must maneuver a bulky suitcase.

Instead of turning their journey into a bleak tragedy or a quest with overt themes of resilience, hope, and camaraderie between women, Hittman focuses on the small moments of tension and terror. There’s the man casually masturbating on the subway in the middle of the night, and Skylar pulling Autumn away with a shocked urgency. There’s Skylar showing Autumn a text message at Port Authority and the two girls struggling to giggle, searching for a moment of teenage normalcy. There’s Autumn undressing, and the gut-punch of a focus on her stomach, bruised from her attempts at inducing a miscarriage. There’s Autumn catching Skylar and Jasper sharing an awkward kiss, and subtly reaching for Skylar’s hand in a show of support.

The most heartbreaking detail, of course, comes shortly before Autumn’s abortion. A counselor asks Autumn questions in quick succession. Does her partner refuse to wear a condom? Does her partner push her for sex when she doesn’t want to have it? She’s instructed to respond with one-word answers—never, rarely, sometimes, or always—but eventually, Autumn stops answering. We’re forced to look at her, exhausted and blinking back tears for the first time in the film, and fill in the blanks.

In Never Rarely Sometimes Always, Hittman perfectly contrasts two equally dismal environments: there’s Autumn’s sleepy small town, and then there’s New York. Like very few films before it, Never Rarely Sometimes Always captures the isolation, anxiety, and dread someone might feel at 2 a.m. in such a loud, lit-up city, just hours before a highly anticipated procedure. Every man who interacts with Autumn and Skylar along the way inspires a sense of fear; every small smile the cousins exchange offers a flicker of relief.

When the film ends, viewers might feel tired, as if—like Autumn—they just experienced 48 hours of up-all-night unease. But there’s still so much work to do, and with abortion clinics closing around the country and Roe v. Wade under attack, a future version of Autumn’s story might be even more terrifying. Check out Planned Parenthood’s website for information on how to fight for everyone’s access to reproductive health care. And if you or someone you know needs an abortion, visit ineedana.com to find updated, localized, and straightforward information on your options.

Tags: Never Rarely Sometimes Always , Eliza Hittman , Sharon Van Etten , abortion , reproductive rights , Planned Parenthood
Support Feminist Media!
During these troubling political times, independent feminist media is more vital than ever. If our bold, uncensored reporting on women’s issues is important to you, please consider making a donation of $5, $25, $50, or whatever you can afford, to protect and sustain BUST.com.
Thanks so much—we can’t spell BUST without U.