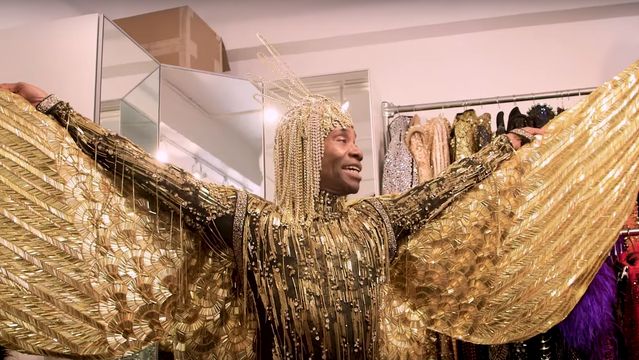 How many iterations of Cinderella has there been? The answer is a lot. From the original Grimm fairy tale to the Disney cartoon to the dozens of modern versions including Another Cinderella Story (starring our queen Hilary Duff) and the latest Disney live-action remake, it is a story folks will surely be telling and retelling until the end of time. Nothing, however, nothing beats the 1997 Rodgers & Hammerstein’s film adaptation of Cinderella starring none other than Brandy, Whitney Houston, Whoopi Goldberg, and Bernadette Peters. Well, nothing has ever topped that remake before...except maybe this.

This morning, it was announced that Broadway extraordinaire, fashion icon, and Pose star Billy Porter will be playng a genderless fairy godmother in an upcoming re-imagining of the classic tale. And we are totally here for it.

News broke early last spring that a brand-new version of Cinderella from the mind of late-night show host James Corden would begin production. The film is set to be a much more modern take on the classic tale than we’ve seen before (other than the Hilary Duff and Selena Gomez version, obviously), and will star pop singer Camila Cabello. She is set to work on the music for the film and many are guessing that the music may draw from her Cuban and Mexican heritage like many of her radio hits do. On IMDB, the cast list also boasts Hairspray Live’s Maddie Baillio, Minnie Driver as the queen, Pierce Brosnan as the king, and John Mulaney and James Corden as...mice. Some are even speculating that Idina Menzel may be cast as the wicked stepmother, and that Missy Elliott will be making an appearance. Now that would be fun.

Nothing has made headlines, however, like the news of Porter’s fairy godmother.

“Magic has no gender. We are presenting this character as genderless, at least that’s how I’m playing it,” Porter told CBS News. “And it’s really powerful. This is a classic, this is a classic fairy tale for a new generation.” Porter then commented on how kids of today are truly ready to see representation like a genderless fairy godmother in films: “The kids are ready. It’s the grown-ups that are slowing stuff down.”

This is likely in reference to the many instances in which conservative parents and adults were angered by LGBTQ+ representation, or representation of different gender identities in films. But the fact of the matter is, kids are ready. The world is ready. And magic really does not have a gender.

This Cinderella is a classic fairytale for a new generation. To be able to play this genderless, fabulous fairy godmother - what a gift. Thank you @CBSNews for sitting down with me and catching up about the role❤️ https://t.co/PgVwnhdthI pic.twitter.com/DZNBmRS3CK

Porter’s new fairy godmother will reportedly be referred to in the film as “Fab G,” and there is no doubt that they will be completely and utterly fabulous. Can you imagine the outfits? Porter made history as the first openly gay black man to win an Emmy, and continuously stands up for LGBTQ+ right and representation. Therefore, he is the perfect person to play such an iconic, magical and positive character.

While the 1997 musical movie Cinderella is superb for a multitude of reasons, one thing that makes it stick out amongst the rest is that it was extremely diverse and showcased the talents of a lot of singers and actors who were huge at the time. While there might not be anything in this world that can top Brandy and Whitney Houston singing “Impossible,” this new rendition will add diversity and representation to the timeless classic once again. Personally, I can’t wait to see a dope musical number starring Porter and Cabello. In fact, can we get Missy in there too?

It's #NationalPrincessDay And Here Are Our Favs