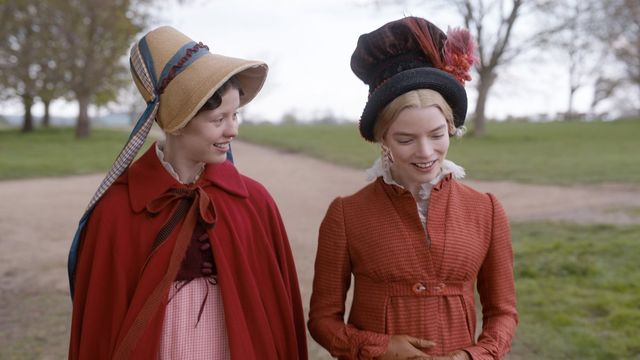 Jane Austen once described the protagonist of her 1815 novel, Emma, as “a heroine whom no one but myself will much like.” What she meant, of course, was that the spoiled, scheming Emma Woodhouse isn’t exactly a Jane Bennet, or even an Elizabeth. But for over 200 years now, there’s been something irresistible about her story: the miscommunications, the mess-ups, the comedy.

In multiple interviews, de Wilde has said that her goal wasn’t to modernize Austen's story but to humanize it. And though there’s a lot to love about her film—the delightful color palette, Anya Taylor-Joy’s charming performance, the moments of absurdist humor and the slow-burn romance—its humanity is what makes Emma. such a fresh take on a classic.

For instance, in this adaptation, Emma’s (Taylor-Joy) friendship with the sweet if naïve Harriet (Mia Goth) serves as a central relationship. Emma isn’t just trying to misguidedly help her; we watch the two giggle together, suffer without each other, and fall into a deep platonic love. Love interest Knightley (Johnny Flynn) is as good-hearted and dreamy as always, but in the hands of de Wilde and screenwriter Eleanor Catton, he’s prone to the occasional bout of melodrama or condescension. Emma. is still a period drama, a comedy, a love story. But for the first time, thanks to the film’s perfect blend of heart and dry humor and Emma’s endearing, ever-evolving relationships with those around her, it feels like a coming-of-age story, too.

BUST talked to de Wilde about directing her first full-length film, depicting unexpected female friendship onscreen, and bringing one of literature’s most effervescent antiheroines to life.

Do you remember the first time you encountered Emma?

I didn’t go to college and I wasn’t a very good student, [but] I was very obsessed with anything that came from England because my mother is English and I was raised in Los Angeles. I think I dabbled in Jane Austen – I read parts of things. I read [the book] in pieces over the years, but I don’t think I really knew it, which was kind of exciting, actually, because I went hard into my research rabbit hole, which is my favorite place to be.

I think I’m a great student when I have a deadline and a real focus on one thing. Pretty early on in life, I was very obsessed with Shakespeare, and it was the fun of translating forgotten words and meanings. I always liked treating it like another language, sort of going on the hunt and finding out what the meaning was. [I loved] really experiencing that in my research with Emma and uncovering things that I had overlooked and just didn’t know about that novel and the history around it.

When you went into that research rabbit hole, did you encounter anything early on that made you think, “I need to capture this in my film for audiences who might be new to the story”?

I didn’t realize how funny it was. I think the humor was really important to me – [Austen] was a great satirist of small-town life, of the class system, the hubris of youth. Love, obviously. And so that was really important. I didn’t want to treat the book like we were reading the Bible aloud. I think it appears like it’s totally faithful to the story, but we did take a lot of inspiration and liberty. Because the book is so inspiring, it eventually leads to your own life, and we wanted to include those things.

Something I really loved about your film was its depiction of Harriet.

Oh, I’m so glad you said that. That was very important to me. I love how Harriet is misunderstood, and I’m always fascinated, especially with first impressions of women, how they’re treated when they have a high voice – [actress] Mia Goth was really important to play this role, she had a naturally high voice. And so, you know, I think it was important the audience underestimate her, and I needed an actress who could do both: really become a leading lady, a strong, powerful woman towards the end, but start out being [appearing as] kind of a dingbat.

And we also saw her become Emma’s close friend – she wasn’t just her project, but there was real love and respect there.

I think that your first best friend—I can’t speak for men, but for women, you know, it’s almost potentially their first heartbreak, and it’s such a passionate love, especially the ones that come before you’ve kissed someone. They can truly tear you apart or they can be the foundation for the rest of your life, if that friendship works out. And I felt like in order to really allow Emma to have bad behavior but to really fall in love with her, you needed to see how young she was emotionally, and how she had really picked a friend for completely the wrong reasons, which a lot of girls do in power — the popular girl picks the girl who will make her look prettier, or because of loneliness or boredom. And then, when love or friendship surprises you, for some people, it’s almost too late until they realize that they can’t live without this person, or they feel like they can’t. And so I thought that was essential in Emma’s story, to have this friendship sort of catch her by surprise.

There’s a lot of focus on Emma as a matchmaker but she doesn’t really…there’s two people she matches. The point of it is really to try to keep them prisoner in her world. Mrs. Weston is five miles away, and she wants…she eventually realizes she just wants Harriet to herself so she’s not lonely. And that’s very selfish, but I feel like as an adult, you can look at it with a little bit of compassion.

It’s interesting because, in recent years, I think there’s been sort of a shift. We’re embracing these selfish, often flawed heroines like Emma in movies and TV. Did that make you any more excited about exploring certain parts of her character in 2020?

The other night, my friend’s 12-year-old daughter saw Emma., and that night, when she was going to sleep, she told her dad, “Dad, sometimes I’m like Emma.” And I thought that was so amazing—this is why we love antiheroes, male or female. It’s so liberating to see someone with a good heart be bad, because it’s possible for all of us to disappoint, betray, lie. It’s a choice not to, but it’s in all of us, and sometimes it’s liberating to see a character behave badly and to see the repercussions and to feel like there are other people that have had these selfish temptations. It’s good to recognize the instinct. It’s there sometimes. It’s kind of how you learn more about yourself.

This was your first time directing a full-length film. Was that something you always wanted to do?

I tried to make [my photos] seem like scenes from movies, so I think that I was always a storyteller. And I did think, you know, I would really like to make a movie someday, but I didn’t go to film school or college. In the process of doing music videos and commercials, I was learning—and with photography, also—how to build a crew. I think the really important thing about wanting to be a director, you have to learn how to choose the right people to hopefully bring success to the project. I don’t mean financial success, but to actually bring your vision to life. In photography, you can sort of operate solo, and what’s interesting about being a filmmaker is how many people are involved in the end with your completed project, and that’s what’s kind of exciting about it.

I was hoping I would get the opportunity and I was definitely trying to be taken seriously as a director, and it took a long time. But I’m 49 and I don’t regret the journey, you know? I was able to make my first film with this amazing suitcase of knowledge that I had from all these different places, from studying ballet, from advertising to music to fashion. I came self-taught because of some brilliant mentors and I came educated and ready and so I feel lucky. I think it’s never too late. And it feels like exactly the right time for me, and I’m grateful for the experiences I had that were seemingly unrelated for a long time.

Emma. is in theaters now.

What Did Jane Austen's and Charlotte Brontë's Obituaries Look Like?