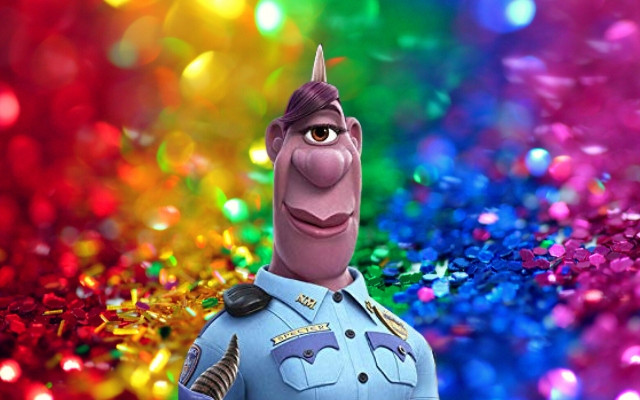 At long last Disney/Pixar has an openly gay character…or so the story goes again.

Actress, director, producer Lena Waithe will voice the character of Officer Specter, a cyclops policewoman, in Disney/Pixar’s latest film Onward (in theaters March 6). Waithe is an out and proud lesbian who hasn’t shied away from making her sexual orientation known. After all, this is the same woman who completely owned the MET Gala back in 2018, rocking a ginormous floor length rainbow flag cape.

Waithe made history in 2017 by becoming the first African American woman to win an Emmy for Outstanding Writing in a Comedy. Waithe won the award for arguably one of the best episodes of Netflix’s Master of None entitled Thanksgiving. The episode was written from a personal place as Waithe drew on her own experiences in coming out to her family to create the episode. In her acceptance speech, Waithe urged people in the LGBTQ+ community to “Go out there and conquer the world. It would not be as beautiful as it is if you weren’t in it.”

With Onward, Pixar veered away from their usual town crier act of boasting about their queer rep, opting this time around to keep tight lipped. The news broke due to a reviewer embargo lift.

Waithe’s character in Onward is reported to be a win for those in the LGBTQ+ community but the reception online isn’t quite as joyous or unanimous. Many online remember being pitched this exact line prior to the release of Disney films that promised genuine representation.

While Disney/Pixar has been progressive in its pursuit of inclusivity they’ve been missing the mark in the area of LGBTQ+ representation. Back in 2017, viewers were told that there would be queer representation with Josh Gad’s LeFou in the live-action remake of Beauty and the Beast. Disney was praised in some outlets for having LeFou be gay in this adaptation however it wasn’t the outright proclamation fans were expecting to see when they were seated in theaters. Instead what we got was a throwaway blip that could have easily been missed had there not been hype surrounding it which put viewers on notice to look out for it.

Marvel Entertainment and Lucasfilm, two major subsidiaries of Disney have both fallen victim to this queer rep problem.

In 2019, director J. J. Abrams got hopes high for fans of the Star Wars series by indicating that The Rise of the Skywalker would feature queer representation. Fans of the franchise were eager, hoping that a romance between Finn and Poe would finally happen. Instead, those hopes were dashed and, in its place, was a quick kiss between two minor characters that barely registered for many viewers.

Similarly, Joe Russo, one half of the Russo brothers who directed Marvel’s Avengers: Endgame, boasted that fans of the Marvel Cinematic Universe (MCU) would have visible queer representation in the film. Once again audiences were let down. Russo himself played the promised gay character which just seemed to add insult to injury in the short scene where Russo’s character spoke briefly about trying to move on after his boyfriend didn’t survive Thanos’ snap.

When it comes to outright, explicit queer representation in movies Disney has more or less been dropping the ball. According to the initial report from Slate, Onward looks to be more of the same with Waithe’s character giving a one-liner about her girlfriend’s child. Many on social media are curious as to how else the character’s sexuality may be portrayed throughout the film or if it’s truly just confined to the one line.

Representation in this capacity matters for the kids of same-sex parents and for queer kids themselves who would be able to see their identities mirrored on the big screen. In turn, it’s crucial that kids—and people from all age groups— are able to see the world as it truly is. Through widespread representation such as film, it becomes that much easier for acceptance to be commonplace.

Oddly enough, Disney Channel has been more direct with queer representation. Back in 2014, Good Luck Charlie featured a lesbian couple. It was just one episode where the couple was taking their child to a playdate but it was a turning point that got the attention of out and proud celebrities like Evan Rachel Wood and former Disney Channel alum Miley Cyrus.

From there, Disney Channel went on to premiere Andi Mack in 2017. The show only lasted for three seasons but will most likely be remembered forever for its impactful queer rep. Cyrus Goodman actually spoke the words “I’m gay” on screen, making Cyrus the first ever gay lead character in a Disney Channel show. These were words many people doubted anything related to Disney would ever be bold enough to have as part of the script. Incidentally, Joshua Rush, the actor who portrayed Cyrus during the show’s run, came out as bisexual last year.

There has been a significant rise in LGBTQ+ representation in children’s shows over the years, outside of Disney Channel. Cartoon Network has been cranking out shows like Steven Universe, Adventure Time, and Clarence that showcase same-sex relationships. PBS gave us a Mr. Ratburn marrying a man on Arthur. Nickelodeon’s Loud House features an interracial gay couple. These shows have been going above and beyond for positive queer rep in kids’ media and serve as roadmaps for other outlets who struggle with uncertainty on how to deliver.

Tags: Disney , Pixar , Onward , Lena Waithe , LGBTQ+ , queer representation , animation
Support Feminist Media!
During these troubling political times, independent feminist media is more vital than ever. If our bold, uncensored reporting on women’s issues is important to you, please consider making a donation of $5, $25, $50, or whatever you can afford, to protect and sustain BUST.com.
Thanks so much—we can’t spell BUST without U.