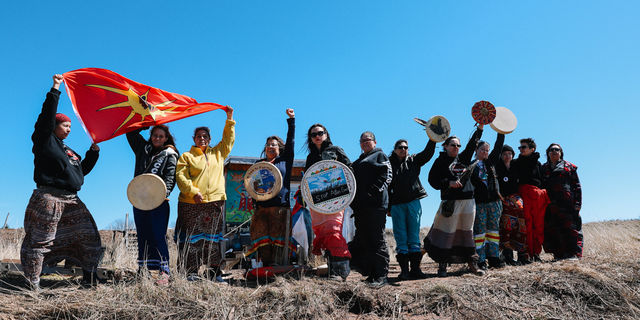 Ellen Page’s documentary, There’s Something in the Water, which premiered at TIFF last fall, is coming to Netflix on March 27. It discusses the very dangerous consequences of environmental racism in Canada, specifically Nova Scotia.

Inspired by the acclaimed book by Ingrid Waldron, social scientist and professor at Dalhousie University, There’s Something in the Water: Environmental Racism in Indigenous and Black Communities uses Nova Scotia as a case example of environmental racism in Canada.

There were so many powerful moments that appeared in the trailer. One part is pointing out all the people in a First Nation community who are battling or had died of cancer. Author and producer Waldron said, “In Canada, your postal code determines your health. So, we know that where you live has bearing on your wellbeing. Indigenous and black communities are the ones that tend to be located near hazardous sites.”

Here is the trailer for the film I directed with @ianjdaniel THERE’S SOMETHING IN THE WATER based on the book by @iwaldron2165, also a producer. Featuring the incredible @DelisleLouise @Mikmaq_Michelle @ndngrandmother and more
MARCH 27 NETFLIX https://t.co/YiAz47f3LN

This comes on the heels of anti-pipeline protests by Wet'suwet'en outside the Legislative Assembly of British Columbia in Victoria on February 11, and then, in solidarity with Wet'suwet'en, demonstrators in the Tyendinaga Mohawk Territory shut down major Canadian railways on February 17, in protest of approval for a TC Energy's Coastal GasLink pipeline on Wet'suwet'en land. Despite the peaceful protests, a raid on the Unist’ot’en camp to take down their fence led to the arrest of three female leaders by police, with helicopters, dogs and machine guns. The raid was launched during a ceremony to honor missing and murdered indigenous women.

There are three things that we took away from, but already kind of knew, that this undoubtedly powerful and crucial documentary emphasized:

1. Global Warming Will First Affect Communities of Color and Environmental Racism is Real
We’ve seen it countless times before, in Flint, Michigan and with #NoDAPL. People of color’s statements have been ignored and overlooked for a long time. Years later, Flint residents still doubt the cleanliness of their water and the Dakota Access Pipeline has leaked at least five times. It is because of environmental racism that people of color are much more likely to live near polluters.

2. The Inherent Racism in the Environmental Protests
While people of color have been involved in the movement for years because of the imminent danger, now that white people are becoming involved in the movement, it has become more popular. Vanessa Nakate, an Ugandan climate activist was recently cropped out of photo by the Associated Press so it only shows white women activists. Nakate said, "We don't deserve this. Africa is the least emitter of carbons, but we are the most affected by the climate crisis...You erasing our voices won't change anything. You erasing our stories won't change anything," she said. Activists of color, like Autumn Peltier and Vanessa Nakate, have been getting less airtime and recognition than their white counterparts like Greta Thunberg, for years. These young women have important things to say about our dying planet and they should all be heard.

3. This is not just an American problem
Canada, often idealized for it’s “perfection”, seemed like a safe haven for white liberals after the 2016 election. Many said they were going to move to Canada to get away from all of America’s problems. But the same problems have always been in Canada. Specifically, Canada also has a long history of harming their indigenous population. For a long time, Canada has not acted on their missing and murdered indigenous women and has not apologized for years of forced sterilization of their indigenous population. Justin Trudeau himself has been idealized by liberals. He’s seen as an advocate for the people and the idea of what a leader should be. But it was Trudeau's approval that ensured the construction of TC Energy's Coastal GasLink pipeline. He is a performative activist that “joins” on the protests despite the fact that he has the power to make big changes.

Ellen Page’s first documentary series, Gaycation, on Viceland received lots of praise, so we know that this one will be a hit. Hopefully, this will help highlight how people of color need to be on the forefront of environmental movements. Protestors of TC Energy’s Coastal GasLink vow to keep fighting the pipeline. They will maintain the blockade until the Royal Canadian Mounted Police leave Wet'suwet'en territory.

Tags: Ellen Page , documentary , environmental racism , Canada , climate change , racism , indigenous , first nations
Support Feminist Media!
During these troubling political times, independent feminist media is more vital than ever. If our bold, uncensored reporting on women’s issues is important to you, please consider making a donation of $5, $25, $50, or whatever you can afford, to protect and sustain BUST.com.
Thanks so much—we can’t spell BUST without U.