9 Films to Watch This Galentine's Day 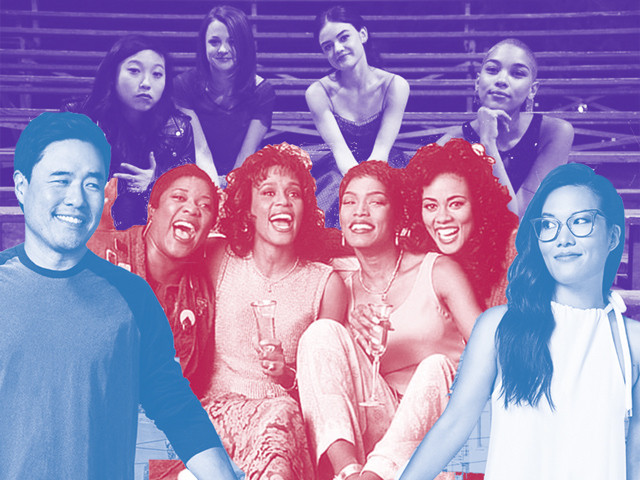 Leslie Knope has filled many a binder with good ideas, but perhaps her best idea is Galentine’s Day, a day for ladies celebrating ladies. Here at BUST, we love nothing more than celebrating rad women, and we especially love it when they show up on our screen. So grab your friends, some wine, and your snack of choice and unwind with some of our favorite flicks about female friendship, as chosen by our staffers.

Featuring a star-studded cast filled with legendary actresses such as Angela Bassett, Loretta Devine, Whitney Houston, and Lela Rochon, four friends tackle the highs and lows of relationships in the mid-’90s. Based on the book of the same name by Terry McMillan, Waiting to Exhale is a classic movie with a dynamic core of women. If nothing else, just watch this movie for the absolutely iconic scene of Angela Bassett burning her cheating husband’s things and setting his car on fire and walking away from the wreckage with a lit a cigarette. You know the GIF. Now go watch the film. –Kim Small

Dude is about a group of girls trying to savor the last moments of high school before they go their separate ways. A movie written and directed by women, Dude reminds us that you and your friends may change, but true friendship is loving one another through that change. Dude is a movie that will make you laugh, cry, and hug your girlfriends tight this Galentine’s Day. –Elizabeth Winn

Always Be My Maybe

Going with something starring Ali Wong always a good idea. Pair her up with Michelle Buteau and you’re left with a wonderfully hilarious movie. I loved how these two women onscreen work with each other. Both Wong and Buteau are known for their stand-up work and it translates well to the world of film in this movie about childhood friends rekindling a relationship after life has taken them down very different roads. –Kim Small

Do you really need anything other than Queen Latifah, Tiffany Haddish, Jada Pinkett-Smith, and Regina Hall in your life? This hilarious tale of four friends reconnecting in New Orleans will have you and your friends cracking up at their misadventures along the way. I’m rooting for a sequel because this dream team brought the funny in this 2017 hit movie. All of these women are terrific on their own, but the audience is given an extra special treat watching them play off one another. –Kim Small

Time to break out the liquor and blast Lizzo. Someone Great, starring Gina Rodriguez, DeWanda Wise, and Brittany Snow showcases the importance of having solid friends to rely on. After Rodriguez’s character is dumped by her long-term boyfriend, she finds herself eager for a last hoorah in New York before she packs up to head to California for a new job opportunity. –Kim Small

Miss Congeniality is billed as a rom-com, sure, but it’s also a great movie about female empowerment and female friendship (the latter is between the protagonist running for Miss USA and her competitor). What starts as a rivalry becomes a lovely dynamic that lasts through to the sequel. It’s not so much a romantic comedy as a story of Gracie (Sandra Bullock) being a badass, hunting for the bad guy, and rejecting just about everything that’s even remotely romantic. If there’s any romance movie that’s perfect for an anti-Valentine’s mood, it’s this one. –Joline Faujour

Ohhh my tender little heart, just thinking about Frances Ha. This was my favorite movie of the past decade, and every time I watch it, I love it a little more. Frances Ha, written by Greta Gerwig and Noah Baumbach, is about Frances, a 27-year old dancer living in Brooklyn with her best friend Sophie. When Sophie moves out of the apartment, Frances is then forced to find a new place to live. Her journey takes her all around New York, back home to Sacramento, and even Paris. The movie is pretty much plotless, but it’s not rudderless at all. Every scene is a delight, the script is filled with so many gems ("Sophie, I fucking held your head while you cried! I bought special milk for you. I know where you hide your pills. Don’t treat me like a three-hour brunch friend!”) and it’s such an honest depiction of female friendship. What I like most about Frances Ha though, is that while the relationship between Frances and Sophie is important, the movie is ultimately about the relationship Frances has with herself. Galentine’s Day is about celebrating the ladies in your life, but sometimes the lady you should be celebrating is you! –Emma Davey

Ladies and Gentlemen, The Fabulous Stains

Do you like music? Do you like Laura Dern? If you said yes to one or more of these questions, then your next movie night pick should be Ladies and Gentlemen, The Fabulous Stains. The movie concerns a trio of young women who form a punk band, get famous, sell out, and make some rad music in the process. The script was a collaboration between Nancy Dowd and Caroline Coon, a music journalist from the London punk scene. The film was a box office flop and for years could only be seen on late-night TV or through trading bootleg VHS tapes, but it helped inspire the riot grrrl movement of the 90s. Starring a young Diane Lane and the aforementioned Laura Dern. –Emma Davey

Okay, fine—this one isn’t a movie. But still worth the watch is Hulu’s feel-good, occasionally ridiculous and often heartwarming story of Jules (Kat Dennings), who realizes she has no women in her life after she’s unexpectedly dumped by her longtime boyfriend. Jules’ former best friend, Madison (Brenda Song) is more than ready to call her out for dropping everyone for a guy, but with time and tons of effort, Jules is able to reconnect with her old female friends, bring some new ones into the fold, and find a sillier, better, and more everlasting love story. –Lydia Wang