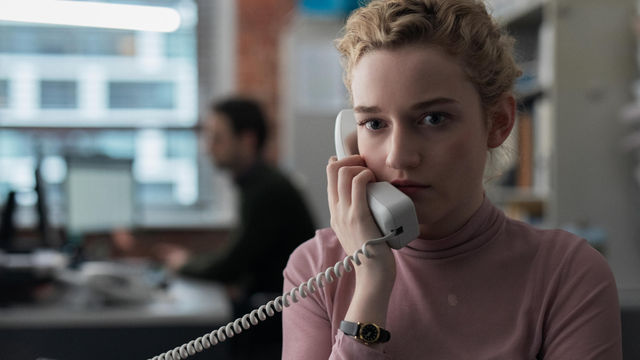 The Assistant
Dir. and written by Kitty Green
Out January 31

The Assistant is undoubtedly a thriller, but don’t expect any fast-paced action or hard-to-follow twists—the most horrifying parts of Kitty Green’s debut feature film are the details, exchanged glances, and charged subtext. For an hour and a half, we follow twenty-something post-grad Jane (Julia Garner) as she works her personal assistant job: arriving to the office first and leaving last, answering emails and phone calls, ordering lunch for a team of patronizing men. With dreams of becoming a producer, Jane is as eager to take on extra work as she is increasingly anxious about what we learn is a toxic work environment, overlooked by an entertainment kingpin clearly inspired by the likes of Harvey Weinstein and Matt Lauer. The bulk of the film follows the monotonous and often degrading details of Jane’s job, but the story picks up when Jane fears a starry-eyed new hire (Kristine Froseth) might be in danger.

The best part of The Assistant is the incredible tension Green is able to create throughout, in no small part thanks to Garner’s performance. The ultimate culmination, though, is just as subtle. Viewers can and will draw their own conclusions—there is certainly room for that. But after so much breathless build-up, the film deserves a climax that’s just a bit less understated—and adds something new to the conversation around abuses of power. (3/5)