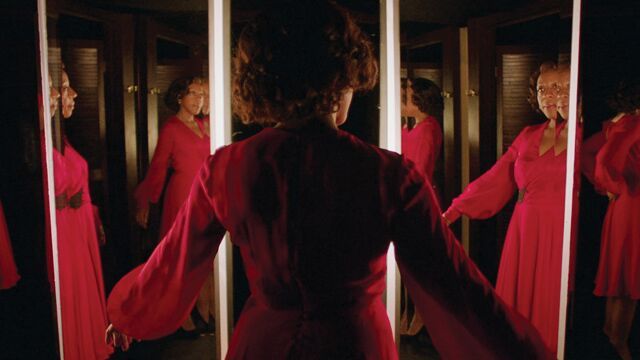 In Fabric
Written and directed by Peter Strickland
Out December 6

In his latest horror film, In Fabric, director Peter Strickland spins a yarn set in a world of ambient electronic soundtracks, pseudo-witches, and costumes that are killer—literally. Sheila (Marianne Jean-Baptiste) is a lonely bank teller still reeling from a divorce, compulsively reading personal ads, and trying to assert parental authority over her son (Jaygann Ayeh) and his off-putting, omnipresent girlfriend Gwen (Gwendoline Christie). In her excitement to find the perfect outfit for a long-awaited date, Sheila purchases a gorgeous red gown from a creepy storekeeper (Fatma Mohamed), even after learning a model died wearing the same garment.

From here, you might expect the film to follow either Sheila’s terrifying misadventures with the dress—which include everything from a chest rash to a violent attack—or the journey of the dress itself as it’s passed from one unsuspecting woman to another. Instead, the story is presented as two somewhat disjointed halves: the gown ends up in the hands of dowdy repairman Reg (Leo Bill) and his fiancée Babs (Hayley Squires). Though there are common threads throughout—the murderous dress stays at the center of the film, as does the darkly delicious, blood-red imagery—the switch is abrupt. Viewers will miss Jean-Baptiste and her winning performance as a woman convinced that a pretty dress might change her life. (4/5)

By Lydia Wang
Top photo courtesy of A24

This article originally appeared in the Winter 2020 issue of BUST Magazine. Subscribe today!

Tags: In Fabric , movie review , Marianne Jean-Baptiste , Peter Strickland , A24
Support Feminist Media!
During these troubling political times, independent feminist media is more vital than ever. If our bold, uncensored reporting on women’s issues is important to you, please consider making a donation of $5, $25, $50, or whatever you can afford, to protect and sustain BUST.com.
Thanks so much—we can’t spell BUST without U.