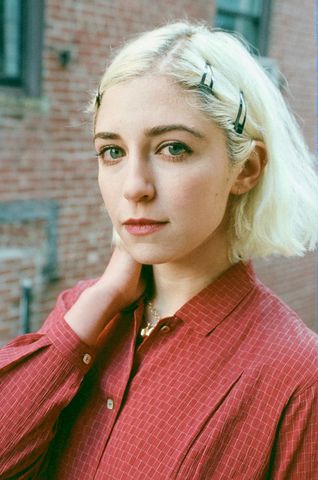 Earlier this year, Mickey and the Bear, a film written and directed by actress Annabelle Attanasio, received a standing ovation at Cannes Film Festival. Since it premiered at SXSW, the film and Attanasio received stellar reviews resulting in many film buffs to count down the days until the general public could view it. Growing up in a home with parents who were a screenwriter/producer and a producer, as well as growing up in the Los Angeles theatre community and performing in plays at NYU, Attanasio was destined to create her own project from the start.

Mickey and the Bear follows high school senior, Mickey (played by Camila Morrone) a teen who has had to act like an adult for most of her life and dreams of escaping her small town for college. While coping with typical teenage angst, her relationship with her father (played by James Badge Dale) is draining. She bears the burden of her father’s battle with addiction and PTSD from the Iraq War, though she refuses to call it that. Mickey’s boyfriend, Aron (played by Ben Rosenfield), he has never been told “no” in his life, also depends on her in almost the same way.

Setting the film in the small town of Anaconda, Montana made this story even more intimate than outsiders may have originally thought. Why? Aside from the main characters, she used actual Anaconda natives to play everyone else. Attanasio made it feel as real as she possibly could, and that’s something a lot of writers and directors struggle with.

Before the film was released on November 13, specifically at the Film Forum, 26-year-old Attanasio chatted with BUST about her specific choices for the film, personal experiences from her life, and what she thinks about the movie industry and how they help women be as successful as the men in their field.

You do a good job of showing how women are a very important part of the town, Anaconda. Did you major in or study anthropology?

No, I went to a very nontraditional school called Gallatin, which is part of NYU, and you’re able to really be adventurous in terms of your studies. So in 2014, there was a Dean’s Award for summer research that I applied for with a project that basically said “I would like to go out to Montana to a small town with a big veterans population and would like to research that town. I’d like to research the ways in which trauma and re-acclimation and forms of care for veterans can affect the child. And then ultimately, I would like to turn this into a narrative film.’” And Gallatin’s great because they’re like, “Great! Totally understand that! Sure!” So I got the grant and went out there, and it was a very easy and mutual connection that I had with the people there.

Did you know at the beginning when you applied for that that you would want to make a film about it?

I did. I had actually done a very barebones one-act play version of Mickey and the Bear in 2014. I love when artists explore different stories from very different mediums or very different standpoints. Like, even now I have this idea that it could actually be a great podcast or teleplay. It could be a great stage play or movie or all of them. I’m kind of interested in the ways things can infiltrate different mediums. But after I did the play I was like, "I really want Montana to be the character in the story," so that was why it was essential to go there for a jumping-off point to just get a lay of the land.

In another interview, you mentioned you struggled with codependent relationships with your parents and partners and found yourself taking on too much responsibility and how that happens a lot for teenagers. How does that appear in the film? How did you relate your personal life to this story?

Well, I certainly struggled. I just did an interview, and a man used a really interesting word to describe it, which is the triangulation of the child and the two parents, which is really what I went through as a teenager. But I kind of came out of the womb as being a very mature and very precocious sort of kid. I was less interested in being social and having friends and was way more interested in observing people. So my parents were kind of the first people I studied, and I would say it went from an interest in humanity and the contradictions of people and then it became this thing where I began to want to, like, fix their problems for them. And then I took on too much of that responsibility, which is something I think is way more common than not, and we don’t really have [the] words to talk about it yet, so I think with this movie I wanted to contribute to that conversation—or even just start the conversation.

It was a very relatable movie in that sense. You were originally an actress, and you are very interested in the whole writing and directing part of this field. You said that you did the IFP and Hamptons labs at some point. Did those experiences affect the career change?

Well, I would say with IFP and Hamptons, it just helped me to feel more part of the community. The indie film world in New York is actually very small. There are so many indie films out here, there’s a kind of grittiness to the practitioners and creative people that are working in New York, and I really wanted to be able to feel part of that. So, IFP certainly made me feel part of that because I met lots of other people who are doing the same thing. And then Hamptons, for me, was more about just taking myself seriously as a writer and being alongside two other filmmakers who I admired very much.

I was wondering if you had any opinions or if you feel that the Directors Guild of America is doing everything they can to support directors who are women or if you had any thoughts on things like inclusion riders.

In general, we need to be doing better. There’s a lot of room to improve. I would say the awareness is great, but there’s not enough backing up of our efforts. I think one of the real issues is within communities of hiring women and specifically women of color who are majorly underrepresented in film. It’s not enough. I think because this industry is dominated by men, it’s really crucial to have male allies, and that’s something that I always talk about. Women need to carve out our own sect of the industry by all means, but at the same time, we have to work together. And it’s kind of on the male gatekeepers here to help us to make changes. Do you know what I mean? I think that’s where the stalling is coming from—not enough people in charge are making significant changes.

That’s a really great point, thank you. Your cast is incredible. I read how you realized that these were all the people you wanted, but did you know you wanted Camila to play Mickey?

Yeah! The thing that’s great about Cami and the thing I had wanted so badly was someone who was open and who you could watch process everything that came their way. And I think that’s a very hard line if you are really experienced in acting and have done a lot of movies. It’s like you don’t have that presentness, necessarily, or rarely few people do. So she had that real openness, but then she also is fearless, so she was willing to go anywhere.

Do you have any advice or anything for young, aspiring filmmakers or screenwriters that you’d be happy to share?

Well, I would say if you really want to make a movie, you’ve got to dream about it, wake up thinking about it, and go to bed thinking of it, as well. That became my life for the year and a half to two years before we shot. I think also being open to feedback is really crucial when you’re young. That was something that is sort of part of who I am because I really enjoy that aspect of not necessarily committee style, but I have a producer whose thoughts I really value. I have an editor whose thoughts I really value, and I think working with people who you trust but allowing them to have voices, too, is so imperative when you’re young, and even when you’re not, but particularly when you’re just starting out.