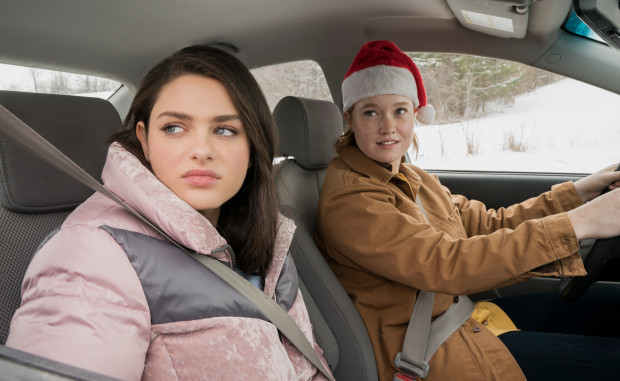 Liv Hewson is having their moment. Following their fan-favorite role as Drew Barrymore's daughter in Santa Clarita Diet, Hewson shines in two new films: Let It Snow, out now on Netflix right now, and Bombshell, in theaters this December. Let It Snow follows a group of high school students whose lives, friendships, and relationships are forever altered when a snowstorm hits their small midwestern town on Christmas Eve. And their second project, Bombshell, tells the true story of the women at Fox News who fought against the toxic and sexist culture that led to the downfall of media mogul Roger Ailes.

At only 23 years old, Hewson isn't just taking the film and TV world by storm: they're an outspoken advocate for equality and change, in their native Australia and elsewhere. BUST spoke with the actor about their role models, their exciting new projects, and what it means to be a feminist in 2019.

I’d like to start with your acting career: what first brought you to the industry?

I never had any other plans. I think I was in my first school play at age nine, and from then on, I was always certain that this was the only thing I wanted to do. When I was in high school I would tell people, "I'm just going to keep doing this, and hopefully one day somebody pays me." That annoyed some of my teachers occasionally, but I was always very grateful to be so sure of what I wanted. There was never any confusion there for me.

In your line of work, is there anyone who’s impressed you or supported you as you pursued your acting career?

I'm constantly impressed by everyone, I think. A friend pointed out recently that I do this thing whenever we watch films together where I lean forward, with my elbows on my knees, whenever something or someone grabs me. I like to be drawn in. I'm the most impressed by actors who can speak without saying anything; people who are comfortable playing with silence. I think that's really special. Storytelling is a collaborative task, that's one of my favorite things about it, so I think it only works when there's a mutual support for the idea and each other from everyone involved. You can't do it alone, and no one does.

I know that these are some of the upcoming works you’re in: Let It Snow, out now on Netflix, and Bombshell that’s coming out in theaters in December. These are both such different and exciting projects!

Thank you! I think so. I'm really excited for people to see them.

Tell me a bit about Bombshell.

Bombshell was an incredible experience to be part of. I didn't know a great deal about the events the film is based on before I was cast, so I was learning all the time about the world around me and myself as a performer. I felt like a sponge.

What did you like about being a part of it?

Honestly, everything. I felt incredibly lucky to be involved and I'm very proud of the film.

What was it like working with such an all-star cast of women including Charlize Theron and Nicole Kidman?

Phenomenal. You love to see it! I hope we get to see it more often. This shoot in particular had a wonderful collaborative energy on set that I found really special. There was a freedom to explore, try things out, suggest ideas. There was a feeling of being trusted, being encouraged to explore as much as possible.

Now, moving on to Let it Snow… the movie was based off of a book published over 10 years ago. Would you say that the film stays pretty true to the book, or do you think it’s adapted for 2019?

The book and the film are quite different, but the heart of it is still the same. One of the lovely things about the film is that it's very grounded in 2019, but the stories are universal. It's real and it's modern, but there's a timelessness to it.

Do you hope that Let it Snow paves the way for more queer romantic comedies, especially those geared towards teenagers?

I always want that, in every genre, in every film I see. More LGBT people in media is something I've always wanted very badly. If our film can be a part of encouraging that, nothing would make me happier.

Thank you! You know, it was bittersweet. We all loved the show and loved making it together. It's always a possibility, though, you know? That's just part of the industry. I think there was a bit of sadness, but also a real sense of being grateful that we got to make it in the first place. I definitely felt very lucky to have spent three years in that world.

Outside of film, you’re involved with several organizations in the LGBTQ+ community, one of which is Wear it Purple, an Australian-based organization for which you’re an ambassador. Can you tell me a bit about why Wear it Purple spoke to you?

They got in touch with me this year about being an ambassador, and I just jumped at the opportunity. A huge priority for me is the safety and well-being of LGBT youth, especially in Australia, because that's where I was one. The last few years in particular in Australia have seen really disappointing treatment of LGBT young people, largely in settings like schools. Wear it Purple does a lot of work with students and one of its core aims is to provide information and resources about LGBT issues to schools and universities. That's vital work, in my opinion.

The last time you spoke with BUST, you said that you were “less interested in calling [yourself] a feminist as an identity, and more interested in doing feminist things” and that you “gotta walk the walk.” I love that. What does “walking the walk” mean to you?

For me, it's about sitting myself down and asking myself what I'm doing, physically, logistically, to take care of the people in front of me. Talking to people, caring for them, connecting them to help if needed, making myself available when I can. Asking for help if I need it. Recommending books, helping a friend find the right therapist, cooking for people. Telling someone when they do something harmful and making sure they understand why. Listening when I get told the same thing. I'm trying to put more emphasis on that stuff; intra-community support, the day to day living of it. Turning the feeling of helplessness into action somehow.

And my last question, I follow you on Instagram, and I love your posts – of course. Your bio says, “skills include bad puns.” Is there a bad pun that you could share with us?

What do you call an average potato? A commentator.

What Kristen Stewart's Latest Interview Can Teach Us About Sexuality, Careers, And Growing Up