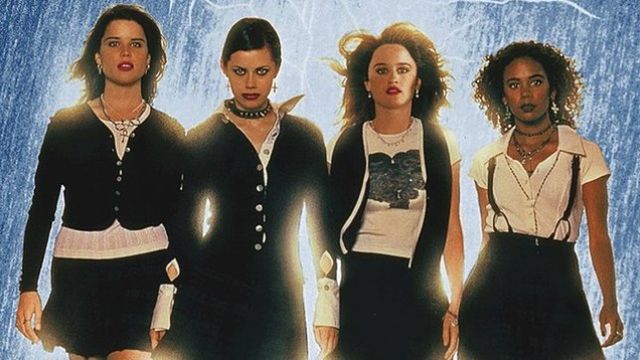 I hate horror movies. I truly, deeply cannot stand gore and jump scares and my overactive imagination going to terrifying places. But I do like movies that are spooky and creepy, and I like movies that have feminist undercurrents even more. That’s why I love the 1996 cult classic The Craft, a movie that has become only more relevant since its release.

I cannot tell you how many books about witchcraft are sent to BUST every day, and it’s pretty clear to see why. In a world where women and nonbinary folks are constantly dehumanized and marginalized, the idea that there’s a power out there bigger than yourself that you can invoke to bend the universe to your will is especially appealing. Witchcraft and feminism have long gone hand in hand. Even before feminism emerged as its own separate entity, women were often labeled as “witches” as a catch-all for being unruly and questioning authority (or apparently, even having a suspicious birthmark or letting their dairy products spoil).

The Craft was a success when it came out, grossing $55 million on a budget of $15 million. The film centers around Sarah (Robin Tunney), a natural witch who moves to L.A. with her family and befriends a group of outcasts at her Catholic school. They enter into a coven and use their newfound magical abilities to exact revenge on those who have wronged them. But over time, the girls start to abuse these abilities and must deal with their eventual aftermath.

Nancy (Fairuza Balk), the volatile de facto leader, uses her power to escape poverty and her abusive stepfather. Bonnie (Neve Campbell), long-suffering from disfiguring scars on her back, heals herself and in the process, takes on a more shallow persona. Rochelle (Rachel True) curses her racist tormentor by causing her hair to fall out. And Sarah casts a love spell on her crush, despite the fact that he spread a nasty rumor about her. All four girls have legitimate reasons that motivate their magic, whether that be undermining capitalism, conventional standards of beauty, or racism. There’s a sort of comfort in getting to control a bully and make him do whatever you want, or see the most popular girl in school become disfigured. When you’re a teenager living under your parents’ roof with little money of your own and little control of your own destiny, the idea that you can access a reservoir of power through ability alone is liberating.

Nancy’s depiction onscreen is complex. She abuses the power she has received from Manon, the fictional god the girls invoke, and kills two men in the process. These men were sexually and physically abusive — theirs were not exactly "innocent" deaths. But the killings weren't necessarily justified through self-defense, so neither the deaths of the men or the choice to kill them earn our full sympathy. Bonnie and Rochelle’s spells are especially mild in comparison: Bonnie just gets rid of her scars while Rochelle makes her tormentor’s hair fall out, neither of them inflicting physical pain on someone else. Both girls lose their powers after going along with Nancy’s torment (and attempted murder) of Sarah.

Yes, their choice to bully their friend was wrong, but their initial reasons for using witchcraft are valid. Sometimes I wish there were another villain in The Craft aside from Nancy, and that the friendship in the coven was more solid, a group of girls teaming up against a larger evil. Other magical media relies on strong friendships — Buffy the Vampire Slayer, Harry Potter, the criminally underrated made-for-TV Olsen Twins movie Double Double Toil and Trouble (I jest) — but this one doesn't. The film is ultimately less of a testament to female friendships, but more of a cautionary tale that witchcraft is empowering, but you have you respect its boundaries. As the owner of the magic shop the girls frequent reveals to them: whatever they put out into the universe, they will get back times three.

Rochelle, the only Black character in the film, also gets the least amount of screentime of the leads, and we know little about her backstory. The other girls have a home life depicted — Rochelle does not. While the portrayal of fighting prejudice in a teen film was handled well, there should be more to a Black character than the racism they experience. Unfortunately, this is something that not only Rochelle endured, but that her actor, True, faced as well. Earlier this year, she spoke in a Twitter thread:

I think it’s interesting these conventions are booking Neve, Fairuza &, Robin all together, but excluding me. Sounds about white.

The Craft’s decision to center outcasts was an anomaly among teen movies. While not every high school movie can be a sympathetic portrayal of the rich and beautiful a la Clueless, most “outcast” movies feature some sort of happy ending or chance at popularity. The ending to The Craft is dark, with Nancy locked up in a mental facility. Bonnie and Rochelle attempt reconciliation with Sarah, who rebuffs them. They don’t remain friends, they don’t passionately embrace their love interests, they don’t graduate and toss their cap in the air.

Though The Craft shares a sinister spirit with films like Heathers, it doesn’t quite square away with our expectations for a typical teen film or a horror movie: it’s its own thing altogether. Unfortunately, its uniqueness made it hard for others to classify it. The film earned an R rating, even though there’s nothing particularly gross or graphic depicted in it. According to the film’s director Andrew Fleming, “We were trying to make a PG-13, so we weren’t using the F-word or having any nudity. Then, right before shooting, the MPAA notified us, because I guess we’d sent the script to them, that no matter what we did, the movie would be an R rating. They said it was black magic and teenagers…” Much like the fellow students in the film, the MPAA was afraid of the unbridled power wielded by teen girls.

The world that teenagers now reside in is increasingly hostile to their safe and happy futures - school shootings, climate change,  student loan debt, Trump and his cronies' brand of general asshole-ish-ness. Teens don't necesarily have to turn to witchcraft to bring about change, but the way so many of them have embraced activism in the face of the mess previous generations have left them? Now that's magic.

Erasing Rochelle: The Importance Of Black Female Representation In "The Craft”