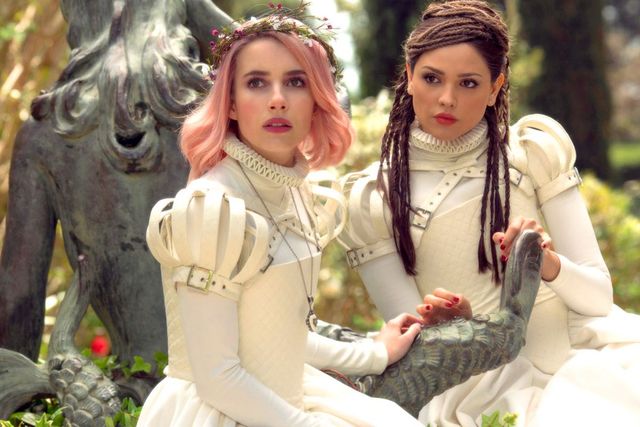 Filmmaker Alice Waddington’s directorial debut stars Emma Roberts as Uma, a young woman of high social class who wakes up in a candy-colored, dystopian “paradise.” Though the aesthetics are heavenly, she quickly suspects her new home isn’t exactly idyllic. Something like a rehab center, the island is full of upper-class girls who have failed to appease their families. Uma’s fatal misstep? Her refusal to marry the cruel billionaire of her parents’ dreams.

She does find a crew of unlikely comrades, though, in sweet southerner Chloe (Danielle Macdonald), whose family wants her to lose weight, Yu (Awkwafina), who suffers from anxiety, and famous, secretly queer Mexican pop star Amarna (Eiza Gonzalez). Led by Uma and Amarna, the group sets forth to figure out what’s really going on, and in what was clearly designed to be a feminist twist to the classic fantasy or sci-fi film, the women must now rescue each other—and themselves.

The story itself is pretty simplistic, which is a disservice to both the film’s all-star cast and the beautiful, grim world Waddington creates—Awkwafina and Macdonald, in particular, deserve way more to work with. But the gorgeous costumes and sets are a treat to look at, especially when paired with the film’s underlying message about the importance of escaping the restraints of gender roles and, instead, creating your own definition of femininity. (3/5)

Tags: Paradise Hills , Alice Waddington , movie , film review , movie review
Support Feminist Media!
During these troubling political times, independent feminist media is more vital than ever. If our bold, uncensored reporting on women’s issues is important to you, please consider making a donation of $5, $25, $50, or whatever you can afford, to protect and sustain BUST.com.
Thanks so much—we can’t spell BUST without U.