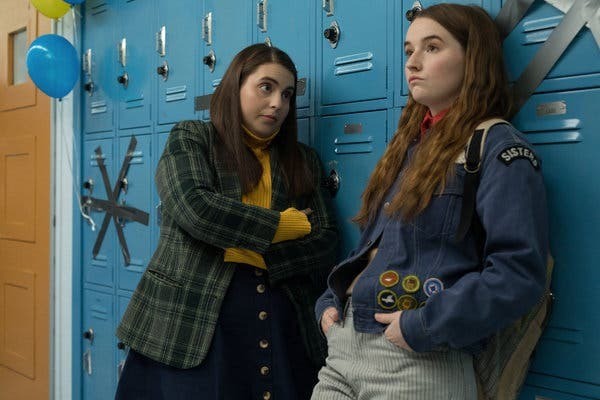 Olivia Wilde, as the source of beauty and wit she is, has already given us so much with her directorial masterpiece from earlier this year, Booksmart. And yet, she has imparted even more of her wisdom unto us, highlighting the fault in the way female-run comedy is often covered. In a recent interview with Yahoo Entertainment, when asked about the common comparison to the male-dominated 2007 comedy Superbad and Booksmart, Wilde commented, “I mean, hopefully, we get to a point where every female movie doesn’t have to become the female version of a male film.” One can only dream!

This is Wilde’s first time directing a film and her reflections on the film's public perception say a lot about what it’s like to create a female-fronted comedy in 2019. In the interview, Wilde continued to talk about the relationship between gender and Hollywood, specifically within comedy, by saying, “I also think that, you know, people are more accustomed to male-dominated comedies… There’s still a lot of work to be done to say, like, hey, this is not a male-dominated game.” And though Wilde surely changed the game with her movie, the mainstream response to the film still showed a setback.

Just letting you guys know @Booksmart is even better the second time and ALSO the theatre was STILL FULL weeks later and like the laughs are so good people were gasping for air and seriously one of my faves EVER. @oliviawilde

To its own merit, Wilde’s film drew lots of excitement and not just because it had women but because it looked kickass and hilarious. The indie comedy follows one last night of partying for two ambitious and politically active girls getting ready to graduate high school. Wilde directed the film with the intention of catering to teenagers today (and not in that cringey way where 30-year-old actors talk about Snapchat and Kylie Jenner), calling it a "generational anthem." Soon after the film gained buzz, it was dubbed the "female Superbad," which maybe makes some amount of sense: there are some plot similarities and, coincidentally, Booksmart lead Beanie Feldstein is actually Jonah Hill’s younger sister.

Another part of the rationale in the comparison is that Superbad is a cult classic so of course it's going to pop into people's memory. (For me, Superbad was that thing I once pretended to like so boys would think I was chill [not like other girls™].) Wilde even acknowledged the supposed compliment of it all, noting, “I mean, in a certain sense, I’m like, we should be so lucky. I fucking love that movie. It’s amazing. But I did feel that we should stand alone.”

saw booksmart 2x and was beside myself both times lol. Representation is rly fucking powerful

Wilde’s comments call attention to how even what can seem like progress for women in the film industry can still be centered around men. In the case of Booksmart, the film was defined both by its status as a female comedy and its constant comparison to Superbad. Both of these ideas position men in comedy as the norm, and paint the idea of the female-led comedy as some special twist. Though it did star two dynamite young actresses and undoubtedly gave a space for the new generation of women, it was also just plain funny. It doesn’t just succeed as a female comedy, but it succeeded as (get this) a comedy film.

Also, what is so hard to understand about the film's plot that it constantly has to be compared to a similar arch made 12 years earlier, especially when the films are vastly different in substance? One huge difference which is worth pointing out: its treatment of women. In Superbad, almost every female character in the movie is a moving sex target for three dorky guys. In Booksmart, Wide made the risky decision to depict her female characters — even beyond the two leads — as complex humans, complete with brains and other stuff!

oh superbad? the film where two boys buy a bunch of alcohol in the hopes of getting girls drunk so they can lose their virginity? yeah booksmart wins https://t.co/Teu2K2jIZq

Booksmart was fun, fast-paced, clever, and surprisingly emotionally intelligent for a comedy. It dealt with anxieties of our generation, like basing your self-worth off of college admission, questions about identity in the face of poorly-fitted stereotypes like "jock" and "nerd," and the constant competition with our peers. For young girls, the movie honestly dealt with the daunting cloud of "likeability." And Olivia Wilde delivered it with beautiful cinematography and strong acting! It was a movie that deserved more, and it was certainly not just a female Superbad.