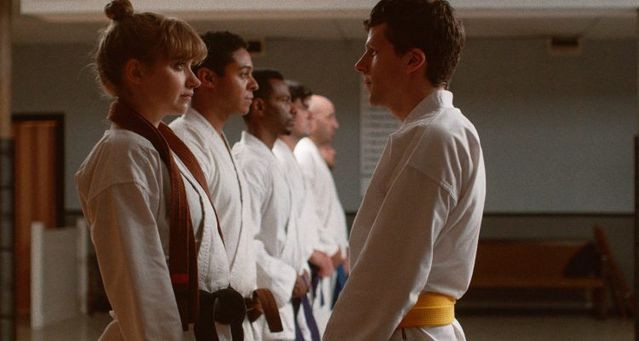 The best one-sentence description of The Art of Self-Defense I have managed to conjure up is “Fight Club, but directed by Yorgos Lanthimos.” It takes place in a completely generic 1990s-era town, where the dog food in the grocery store is literally labeled a brandless “Dog Food,” where the protagonist’s home answering machine informs him that he has “only” one new message, while a news anchor blithely recommends protecting oneself with a gun or large knife while out in public.

The Art of Self-Defense pulls no punches. (There’s the pull quote for the billboard.) It’s a brutal, darkly funny parable of the dangers of toxic masculinity, and a stirring cautionary tale for the sort of men who worry that they aren’t following some circumscribed set of Rules for Men, and who think that the way to becoming the ultimate man is through violence.

Jesse Eisenberg, perfectly cast here, plays the ultimate distillation of pretty much every previous Jesse Eisenberg role, but taken up to eleven. His character, Casey Davies, is introduced at the beginning of The Art of Self-Defense as completely passive and non-confrontational, to a degree that even a pacifist would likely think is overkill. It’s telling that his first lines in the film are literally “please don’t be angry, I’m just an American tourist,” which he repeats after his French-language tape playing in the car; he’s learned enough French to understand that the French couple sitting near him in the cafe is mocking him ruthlessly, but never even considers standing up for himself.

Casey’s posture is hunched and awkward, his fingers waving like spindly dandelions as he talks, his manner of speech overly-circuitous and far too detailed for his he-man work colleagues to bother listening to. He’s the kind of guy who happily attends his boss’s dinner parties, who stays late at his accounting job, whose only friend is a small, adorable dachshund. If you want a stereotypical depiction of what the dregs of the internet refer to as an “incel,” look no further (despite the lack of overt sexual desire in the film as a whole). It’s the perfect role for Eisenberg, because it requires that he play up the nervy and nerdy physicality he’s so associated with in order to demonstrate that its opposite—that of the rugged, bloodthirsty, hyper-masculine ideal—is not only comically ridiculous, but toxic, and completely unsustainable as a way of living.

When Casey is mugged by a gang of motorcycle riders, he wanders into Sensei’s (Alessandro Nivola) dojo hoping to learn to defend himself, and is seduced, bit by bit, into Sensei’s personality cult of karate and strictly-proscribed masculinity. Sensei is swaggering, confident, and just encouraging enough to draw Casey into his orbit, which begins with the donning of a white belt and ends with induction into the ultra-violent night class and all of the unquestioning loyalty it requires. Casey reveals to Sensei that he is afraid of other men, and that he wants to become what he fears, thinking it will transform him into the physically domineering, dangerously charming Sensei—the ultimate “Chad”—who becomes his teacher.

But for Sensei, being a student of karate isn’t enough, and masculine violence isn’t only for its own sake. It’s not enough for Casey to become what he fears: Casey must narrow his identity and life to fit within the parameters Sensei deems appropriately masculine. Swap out adult contemporary for metal music; quit learning French and take up German instead; ditch the dachshund for a German shepherd—a truly masculine and aggressive alpha dog. If Casey ends up becoming physically aggressive at his job, neglecting his too-feminine dog, or even beating an innocent stranger bloody, so be it: it’s the price he must pay in order to feel like he’s not, as he puts it, “less-than.”

Most importantly, as we see played out literally in The Art of Self-Defense, this rigid and destructive interpretation of masculinity must be perpetuated through ritual violence in order to survive. It’s essentially the physical version of becoming “redpilled” (as it’s referred to in those previously-mentioned dregs of the internet). His life becomes governed by rules, and by violence, from the ceremonial bowing before you step onto the mat to the bloody night class and its unnerving, mostly-naked cool-down session. As we observe with Casey and the other members of the dojo, including its sole female student Anna (Imogen Poots), we learn that it’s not sustainable, either physically or emotionally, to live this way. (Even if you get facial surgery to look more like Chad, you still won’t be happy.) The coldly vicious type of masculinity that restricts what kind of music you can listen to is so soul-killing that it must be actively codified, practiced, and passed on in order to exist at all. In Anna’s case, despite her proficiency at karate, she’s accepted and, to some degree, internalized Sensei’s codified misogyny. She will never be a black belt, even though she’s better than the male student awarded a black belt, because Sensei doesn’t believe women are strong enough to be black belts. Sensei’s dojo creates its own victims and acolytes, continually replenishing its membership through Sensei’s instructions and tasks, and it’s not until late in the film that Casey realizes that being a victim and an acolyte are the same thing.

Early on in The Art of Self-Defense, Casey watches an action movie in which the winner of a fight shoots the loser, who protests that he’s breaking the rules, and taunts him, saying that there never were any rules to begin with. (I’m paraphrasing the exact dialogue.) While Sensei obviously comes across as humorous at times in his exaggerated dedication to a singular version of manliness, it’s easy to see how he could be compelling to someone who is afraid—to someone who feels as though he is perpetually lesser because he can’t fit into that vision. The timely message here, delivered with all the blunt-force trauma of a punch delivered by a foot, is that masculinity (and gender in general) should not be governed by a soul-killing set of rules of engagement, and that the people who seek to enforce those rules are the problem, not those who can’t exist within their limits.

Top photo via Bleecker Street / The Art of Self-Defense