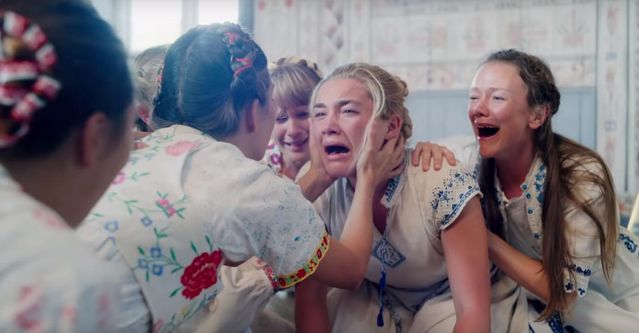 Spoilers Ahead: The following reveals key plot details about the film Midsommar.

With the highly-acclaimed Hereditary under his belt, Ari Aster is among a handful of writer/directors drawing attention to the horror genre. Historically, horror has been snubbed. It’s often deemed devoid of substance and talent. And despite its capacity for sharp cultural insight, it’s routinely denied rightly-deserved awards (read: Toni Collette should have won an Oscar for that eye-bulge scream scene alone). But Hereditary, The Witch, The Babadook, Get Out, and most recently, Us, prove the genre is ripe with potential.

Aster’s new folk-horror film, Midsommar, is set to join that growing body of artful horror. A24 released the film on July 5th, just in time to bathe your summer in a wave of dread. If you haven’t had a chance to see it yet, don’t expect trailers to properly prepare you. The clips that have been made public only reveal minimal plot details, indulging instead in Aster’s atmospheric acuity. Full of hallucinatory images, idyllic landscapes, burning bodies, lips pulled back to reveal bleached teeth, leering blondes, a bear’s belly ripped open, swirls of dancers clad in white gowns—the trailers offer us only a taste.

In a few words, Midsommar interrogates grief and failing relationships, amid nauseating bouts of body horror. The film situates itself within Scandinavian festival culture, during a ritual that only occurs every 90 years. Young couple Dani (played impeccably by Florence Pugh) and Christian (Jack Reynor) arrive at the festival as guests, completely unprepared for what’s to come. Set in sun-drenched Sweden on one of the longest days of the year, the film highlights all that there is to be afraid of in broad daylight. And it leaves audiences deeply rattled, if not utterly reeling.

Aster himself has called the film a “Wizard of Oz for perverts” and, given the film’s ability to capitalize on the uncanny, that description is fitting. But a week after my first viewing, I’m still decompressing and, like most, I’m still trying to work out what I just watched.

Let’s unpack a bit. In the first act, we’re thrown into a web of tensions. We quickly learn that Dani’s long-term relationship is failing—her boyfriend Christian is unmotivated, immature, and emotionally absent. He’s thinking about breaking up with her when she calls him, worried that her sister has hurt herself. Christian brushes it off and blames her for allowing the behavior. But, Dani’s right to be anxious. The next call she receives bears news that her sister has killed herself with an exhaust hose, which also inadvertently caused the deaths of both of her parents. She’s deeply traumatized from that recent tragedy when she agrees to join Christian and his buddies on their trip to Sweden.

So when we meet Dani she’s encountering the magnitude of a massive loss. But her boyfriend’s juvenile antics make so little space for her pain that she’s left to stifle her wails in bathroom stalls. As the film wears on (it’s almost two and a half hours), we see the tension between the two grow—Christian keeps his emotional distance and checks out Swedes before Dani’s eyes. Meanwhile, the cult’s kinship structure begins to entice Dani, so recently deprived of her own family.

Midsommar begins to derail itself intentionally, its tightly woven plot unspooling into warped surrealism. A dreamscape becomes a bad trip, then a full-blown nightmare: the smiling crowd that welcomed Dani and Christian murder their friends one by one in progressively gory ways. By the film’s climactic moment, Christian has cheated on Dani with a cult member and, after trying to escape the scene naked, is paralyzed and placed in a bearskin. Dani has won a dancing festival, is crowned May Queen, and must now choose an individual to sacrifice. It’s at this point that the resentment between the two reaches its fever pitch. After so much neglect and betrayal, Dani’s been pushed to her limit. Midsommar’s final scene captures a smile breaking across her face as she watches her boyfriend burn alive. What we're left with is not quite catharsis. It's liberating and eviscerating in equal parts.

But these twists are becoming Aster's specialty. Even before Midsommar started screening, he had already made a name as a horror aficionado. Now Aster's begun to establish himself as a director who tells stories about women confronting fraught relationships, all while navigating their own fraying mental health. His break-out hit Hereditary concentrated on Joy (Toni Colette), an artist grappling with the death of her estranged mother. Midsommar similarly features Dani, a college student facing a monumental familial loss. And while it certainly asks questions about the meaning of family and the immensity of grief, Midsommar is primarily concerned with its central dysfunctional relationship. Maybe that’s because Aster wrote the film following a particularly painful breakup. But with such a personal impetus, it comes as no surprise that Aster’s final product remains fixed on the nuances of a deteriorating relationship. Beneath Midsommar’s sheer brutality, there’s an intricately-designed domestic drama unfolding.

Watch Midsommar for Aster’s commentary on toxic masculinity, the detached boyfriend archetype, and the limits of emotional resilience. But be aware that you’ll need a few hours after leaving the theater to digest what you’ve just witnessed.

Top image courtesy of A24