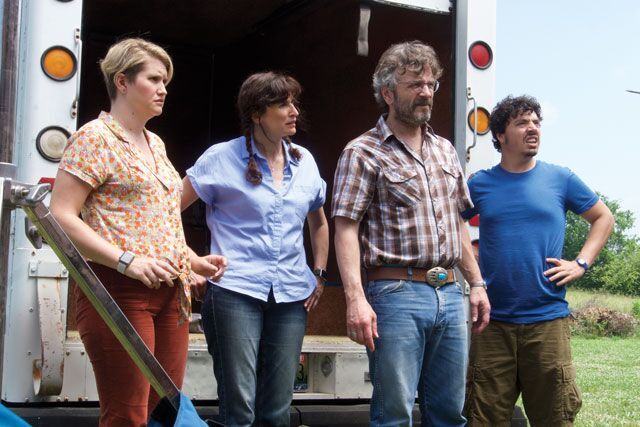 In this improv-based comedy by celebrated writer/director Lynn Shelton (Outside In, Your Sister’s Sister, Humpday) a Civil War-era sword sets off a crazy chain of events made even crazier by the rampant spread of online conspiracy theories. When Cynthia (Jillian Bell) inherits the sword from her deceased grandpa, she and her partner Mary (Michaela Watkins) immediately try to pawn it. At first, the pawn broker Mel (Marc Maron) and his idiotic employee Nathaniel (Jon Bass) are not impressed with the heirloom. But when online research reveals the sword could be worth big bucks to a crackpot sleeper cell of good old boys that believes the South actually won the Civil War, the inheritors and the brokers go on a dangerous mission together to get paid.

A meandering farce with a biting satirical core, Sword of Trust is a film tailor-made for these times, when what you believe is dictated by whatever media you choose to consume. Revisionist historians, flat Earthers, folks who believe in ghosts, and people who no longer believe in anything collide in this strange odyssey through the dark heart of the American South. The improv aspect makes the pacing and dialogue feel a bit unpolished at times, but the overall impact is pleasurable and delightfully weird. (4/5)

How "Laggies" Director Lynn Shelton Found A Backdoor Into The Film Industry: 52 Weeks of Directors

"I Am Homosexual": Celebrating 20 Years Of Team Spirit In "But I’m a Cheerleader"