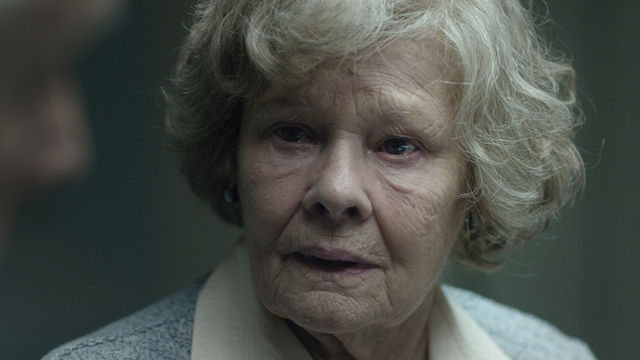 Red Joan has Judi Dench seemingly as the main attraction, but as pretty much every other reviewer has pointed out, that’s quite the red herring; Red Joan, after all, isn’t “starring” Judi Dench, but “featuring” her. The film is, instead, a plodding, intermittently entertaining showcase for Sophie Cookson (who you might recognize as Roxy in Kingsman) encapsulated within a cliched frame narrative. The story itself is reportedly based on the story of Melita Norwood, who passed the Soviets’ information on the West’s nuclear development. Changes have been made to consolidate the nature of Norwood’s spycraft: instead of being a secretary affiliated with Britain’s atomic weapons research, Joan Stanley is a physicist in her own right who grows disillusioned with the win-at-all-costs mentality of her fellow scientists. Sadly, Norwood’s Wikipedia page is more of a thrilling yarn than most of Red Joan.

We open with Judi Dench as Joan Stanley, the archetypal respectable English grandmother, as she’s arrested on charges of espionage. As she begins to tell the investigators her story, we jump into the meat of the film—the flashbacks, punctuated with short interruptions as present-day Joan protests her innocence, saying one thing and remembering another. At the beginning of young Joan’s tale, it’s 1938, in the midst of the Spanish Civil War, when Joan falls in with a group of charismatic Communists while at the University of Cambridge. Sonya (Tereza Srbova) and her cousin Leo (Tom Hughes), two German Jews, lead Joan into a world of dark-roomed film screenings and heated discussions of Soviet political purges, where, of course, only Joan is wise enough to question Soviet propaganda. After graduating, Joan works as a research assistant for nuclear scientist Max (Stephen Campbell Moore), the only man who seems to immediately recognize her value, and with whom she inevitably has an affair. Joan is in the field for her love of science, and is propelled by her belief that it should be a pure and apolitical discipline, even as it’s being used to create nuclear weapons. As a result, she chooses to spy for the Soviets as a means of keeping balance—to make sure that all sides have equally destructive capacities and therefore won’t attack one another.

There are kernels of a more thoughtful narrative that could have been told in Red Joan, if the filmmakers were committed either to following Norwood’s life more closely or committed to stressing the struggle Joan faces in reconciling her scientific mind with her humanitarian concern for people’s welfare, and for the loss of human life that these nuclear technologies could cause. After all, making Joan a scientist rather than an administrator arguably gives the character a greater sense of personal responsibility in the fate of the world—if she succeeds in making a breakthrough, it’s good for her career, but potentially catastrophic for the people on the other end of the little red launch button. Alternately, the filmmakers could have played with the nature of memory, and of storytelling, and emphasized the gap between what Joan Stanley tells her interrogators and what she actually believes, thus creating a protagonist whom we, the audience, cannot precisely pin down. There are hints of this nuance in Dench’s performance, which we can observe as we are expected to connect the passionate, heartfelt young Joan and the more reticent, truth-eliding elderly Joan, but this theme isn’t expanded upon nearly enough.

Instead, Red Joan splits the difference, choosing to de-politicize Joan’s reasons for giving the Soviets secret information and ascribing the dirty politics of it all to Sonya and Leo, while failing to truly explore Joan’s realization that science is not, and has never been, devoid of politics. It’s through her close relationship with Leo, and his tendency towards grandiose statements about civilization, that Joan begins to understand the world as made up of people rather than rather than glorious buildings and monuments. Yet on the whole, the portrayals of Sonya and Leo, while meant to be seductive and compelling, I assume, are less of individuals than of mysterious, shifty ciphers. Sonya takes long, glamorous drags on her cigarette, always looking as though she’s internally laughing at Joan’s naiveté, while Leo alternates between passionate defenses of the Soviet Union and manipulating Joan with romantic gestures, calling her “my little comrade.”

The fact that they’re the only Jewish characters in the film and are the ones responsible for later cultivating Joan as a spy is even more unfortunate, because in real life, Melita Norwood was raised in a family with strong ties to leftist politics and seemed to be a committed Communist throughout her life. While the elderly Joan Stanley protests that she wasn’t a Communist—that joining Communist clubs and attending demonstrations was just the thing everyone was doing in university—Melita Norwood didn’t need to be deceived and led astray by cosmopolitan, attractive Jews with questionable approaches to morality, because Norwood already believed in the cause. But for the filmmakers of Red Joan and their resolutely black-and-white portrayal of Cold War politics, a protagonist who betrays her own country in the service of a sincerely-held ideology, rather than the total lack thereof, isn’t worth exploring.