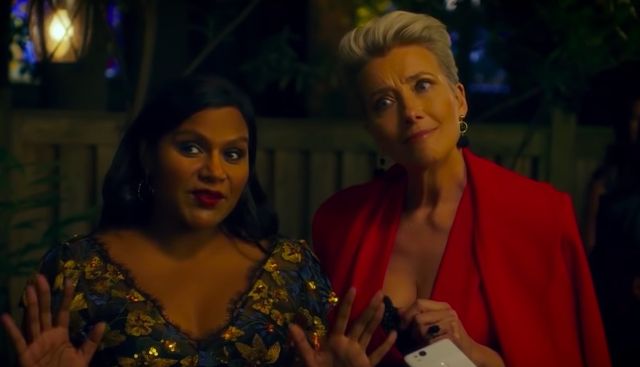 For anyone in their early twenties fiddling with stand-up lines or ardently attending improv classes, the imagined space of a writer’s room quickly becomes the romanticized and elusive idea of what it means to devote oneself to comedy. As I watched Late Night, starring and written by Mindy Kaling, I couldn’t help but fall more and more in love with the comedy career I’ll never have. I can’t tell if I’m grateful or angry at Mindy Kaling for showing me the absolute, albeit glorious, shit-show that is a writer’s room. Either way, Late Night makes it clear that while writing for late night television may not always make great comedy, the process certainly makes for great material.

In actuality, the writer’s room is only a small part of the huge fantasy world that makes up Late Night. Longtime host Katherine Newbury, played by the iconic Emma Thompson (Love Actually), faces the ticking time bomb set against older women in Hollywood as she approaches the end of her late night television show. Despite this alternative reality where there is at least one host of late night broadcast television that is also a woman (currently there are none!), Newbury’s writer’s room fails to include a single woman or person of color, the classic oval table laden instead with lampoon-crested white men (painfully relatable) who represent everything that is archaic and stale about comedy - which, according to Late Night, is celebrities who look like animals, and vice versa. I agree, that sucks.

In the haze of primetime mediocrity, Molly Patel, played by Kaling herself, not-so-gracefully stumbles her way into a field originally created to masturbate the wealthy white man’s ego. While originally hired as a token woman and person of color, Molly unrealistically has zero qualifications, perpetuating a narrative that minorities are hired for the sole purpose of affirmative action. Late Night’s failure to directly address this stereotype is disappointing; however, the movie tries in many ways to critique the warped perspective white people have when it comes to “diversity hires.” Molly Patel is talented, and although in this fairytale she really is the downtrodden Cinderella who gets swept up by prince of late night television, Patel proves herself to need no savior, slowly but surely beginning to dominate as a capable and genuinely funny comic — whose humor is fresh and political, bringing Newbury’s show relevance in a world where fourteen-year-olds turn viral Youtubers overnight.

In the end, Late Night really is about the female friendship between Katherine Newbury and Molly Patel. Romance takes a backseat, with a single kiss on the shoulder being the entire culmination of the movie’s main heterosexual will they/won’t they dynamic. Instead, Late Night offers its audiences a different kind of love (although Newbury would be reluctant to use that language), built on female friendship and solidarity. It’s a slow burn—as all good romantic comedies are—with the enemies-to-(platonic)-lovers trope holding out until the very end. Here, Late Night diverges from the likes of A Devil Wears Prada, reflecting a gradual feminist development in the portrayal of women’s relationships.

They do say a single conversation in half-painted Coney Island shithole can change one person’s life — or two, if you’re Katherine Newbury and Molly Patel. This is what makes Late Night special: swallowing their pride, and wading through bureaucratic power hierarchies, two seriously talented women are able to find and actually support each other in a world that teaches women to be in constant competition.

So go see Late Night — for the jokes, the heart-wrenching moments, and maybe to remind yourself one more time that women are funny(ier) than men.

“The Hustle” Composer Anne Dudley On Her Creative Process And Storytelling Through Music: BUST Interview

Tags: comedy , friendship , feminism , late night , movies
Support Feminist Media!
During these troubling political times, independent feminist media is more vital than ever. If our bold, uncensored reporting on women’s issues is important to you, please consider making a donation of $5, $25, $50, or whatever you can afford, to protect and sustain BUST.com.
Thanks so much—we can’t spell BUST without U.