Details
BY Gretchen Sterba
IN Movies
Published: 23 May 2019 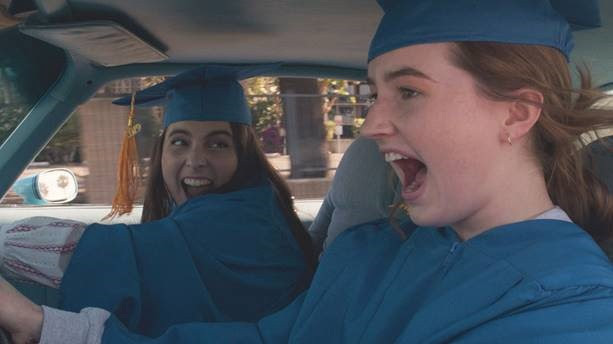 It’s rare in this day and age that a film—specifically a coming-of-age film—stars two young women and doesn't revolve around a man (for future reference, please see The Bechdel test). Booksmart delivers a fresh and relevant take on high school in 2019 and does so with wit, ease, and a whole lot of love.

In Olivia Wilde’s directorial debut, the movie centers around brainiac BFFs Molly (Beanie Feldstein, Saoirse Ronan’s loveable sidekick in Lady Bird / Jonah Hill’s cool little sis) and Amy (Kaitlyn Dever, Short Term 12) about to graduate from their Los Angeles high school and take on the next chapter of their lives, separately. Judging from the plotline, the film seems cliché, but I didn’t know how much I, and so many other women, needed this movie until the credits started rolling.

High school cult classics like Sixteen Candles, Mean Girls, Grease, Never Been Kissed and so many others are fan favorites, but the goal is all the same: to get the unpopular girl with the hunky A-list senior. Albeit these films are a tad outdated, it’s difficult to rearrange the formula high school romantic comedies have given us. Booksmart rewrites its own rules, and does so with a refreshing taste.

Amy (Dever) is struggling like any high school senior, but the film follows her as she navigates her sexuality and a crush on a cool skater girl. As we watch Amy’s journey while she awkwardly attempts to have sex for the first time, it was at this moment where I, a queer woman, realized how much I needed this. And I teared up thinking how many other gay people will see this and know that their love can be represented in mainstream pop culture — that is just one of the beauties of Booksmart.

Another aspect of this movie that cannot go unnoticed is the fact that these two young women are undeniably multi-dimensional. They’re the smart girls in high school who, yes, were cooped up in the library while everyone else was getting drunk for the first time, but as they’re approaching collegiate freedom, they start to ponder about their high school experience and realize that don’t want to be the girls that “missed out.” Instead of being viewed as smart, they want to be smart and fun: an archetype we rarely see shown in movies and television.

Although the film has its unrealistic moments (like when their English teacher, played by Jessica Williams, attends a party and sleeps with her student on the last day of school), the content, the feelings, and the friendships are very much real. High school is a shitty time for almost everyone (if you liked it, well, good for you) and Feldstein and Dever portray how much female friendships are needed for survival during this confusing time when you’re just getting a taste of who you really are.

So bring your best friend, your mom, or an important woman in your life, and go laugh at the poignant — and sometimes absurd — moments that make up Booksmart.

“The Umbrella Academy”: When Adoption Is The Unhappily Ever After