New Netflix Documentary "Knock Down the House" Is Timely and Inspiring

Details
BY Emma Davey
IN Movies
Published: 01 May 2019 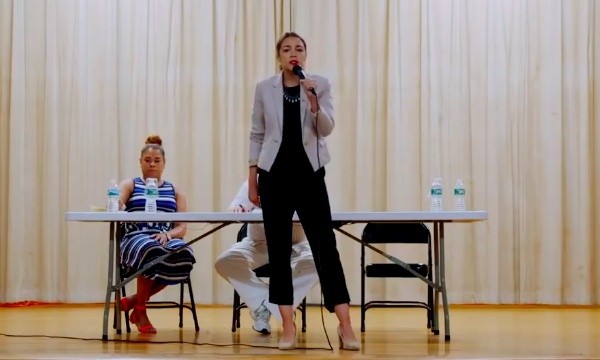 The new Netflix documentary Knock Down the House, set to be released on May 1st, details the stories of four different women who decide to run for Congress in the 2018 midterm elections. The film follows Alexandria Ocasio-Cortez, Paula Jean Swearengin, Cori Bush, and Amy Vilela in their first ever political campaigns. Watching the film is equal parts thrilling, heartwarming, and frustrating. Running a grassroots campaign is hard work, especially considering the fact that all the women featured are running against deeply entrenched incumbents in the Democratic party.

In regards to Ocasio-Cortez, her win last November didn’t come as much of a surprise, but it's sort of been lost that her primary win was groundbreaking. Her opponent, Joe Crowley, was a popular and powerful congressman who hadn’t faced a primary challenge in 14 years. We see Ocasio-Cortez as she goes out of her way to gain more signatures then necessary to put herself on the ballot, as Crowley has appointed the judges on the board of elections who will certify the results. She shows up to a debate where Crowley isn’t even there - he has sent a surrogate. Seeing the blood, sweat and tears that Ocasio-Cortez has put into the race makes her ultimate victory all the more thrilling.

While AOC was truly the breakout political star of this past election cycle, the film could have done a better job of giving equal screen time to all of the candidates. Ocasio-Cortez is the only candidate that wins her race, but the other women are accomplished as well. For example, it is briefly mentioned that Cori Bush was involved with protests in Ferguson, but the film doesn’t detail the extent of her involvement, which was extensive and impressive. Bush was honored as a recipient of the 2015 “Woman of Courage” Award from the Emmett Till Legacy Foundation, the 2016 Delux Magazine “Power 100” Award, named one of the ‘Top 50 Women of St. Louis” by Gazelle Magazine just to name a few of her awards. In West Virginia, Paula Jean Swearengin’s activism was inspired by her family’s history in the coal mining industry. Considering how devastating the effects of both the coal mining industry and the ongoing opioid crisis have been in the state (West Virginia has the highest rate of drug overdose deaths in the country), the film could have been a platform to highlight issues that are often forgotten by Washington politicians.

Ultimately, Knock Down the House is a deeply satisfying tribute to the strength and power of women who have been underestimated and their immense accomplishments in the face of a hostile political climate.

Top credit: still from Knock Down the House (Netflix)

Tags: Knock Down the House , Netflix , Alexandria Ocasio-Cortez , AOC , Cori Bush , Paula Jean Swearengin , Amy Vilela
Support Feminist Media!
During these troubling political times, independent feminist media is more vital than ever. If our bold, uncensored reporting on women’s issues is important to you, please consider making a donation of $5, $25, $50, or whatever you can afford, to protect and sustain BUST.com.
Thanks so much—we can’t spell BUST without U.