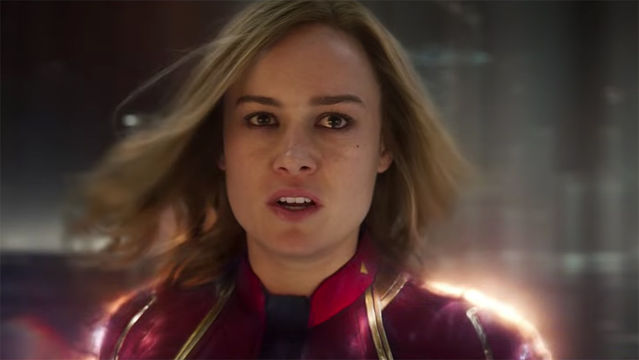 Captain Marvel is a joyride. A classic origin story of the best kind, this recent addition in the Marvel Cinematic Universe tells the story of how Vers (Brie Larson), a resident of the Kree Empire, regains piece by piece her memory of life on Earth, her real name (Carol Danvers), her mission, and her chosen family. The movie opens on Hala, the Kree Empire’s capital planet, where Carol spends her days training to control the power she was told the Kree gave her so she can strengthen the empire’s army. When she is finally deemed ready to be sent on her first mission, things don’t go as planned, and by way of an abduction and escape, Carol lands on Planet C-53, aka Earth. From the moment she falls through the roof of a Blockbuster Video store in Los Angeles, the movie is squarely positioned in the ‘90s, with playful throwbacks to the era. These include Carol, in search of her past, using AltaVista in an Internet café, having to wait excruciating moments for a CD with crucial information to load, and hacking an old-school payphone to call her Kree teammate, Yon-Rogg (Jude Law) in space, only to then lose the connection because the payphone doesn’t support “distance calls.”

The movie’s throwbacks, however, are only a small part of the revelry. The film reaches the full-blown force of exhilaration when Carol starts to question whether the power she has was a gift, or whether it has become part of her independent of anybody else. After spending most of the movie believing that her specialness – her superpower – was something given to her as an act she should be grateful for, she then wrestles finding the truth. As the movie progresses she goes on to uncover a different – human – version of her past than she was told before, finding her way back to people and to memories from her life on Earth. The point following her discoveries, where she chooses to trust her own judgment and her own power, breaking free from her ties metaphorically and literally, is a real moment of hero-making.

What follows her breakthrough is utter elation. Sure, she can throw objects (and people who try to control her) further now, but what shines through most clearly is that she is using a power she knows now to be her own. Her joy in the fight scenes is infectious. When she tries out her full strength for the first time, to the blasting anthem of “Just A Girl,” she is initially almost thrown off balance by how much she can do. From her little side giggle as she explores just how much bigger her hits are now, through the full laugh as she starts flying, to the belly laugh as her entire body, stretched in an X-shape, blows right through a fleet of weapon ships aimed at her, she revels in her own capability. The single most powerful sensation in the movie is Carol’s sheer, groundbreaking joy over owning her power, over fighting to her full capacity.

The high of these moments only gets more powerful as they are rounded out with a much calmer, composed scene between her and Yon-Rogg, her former leader, back on Earth. He first challenges her to a fight by whipping out all his weapons, only to immediately reconsider. He knows he stands no chance if they both use full force after he had just seen what she was capable of in the air, so he suggests otherwise – let’s fight without any “fireworks.” She listens to only half his sentence before she smoothly, content with her choice, blasts him across the desert. And it is in this moment that the movie ultimately shows clearest what owning one’s power is: it is knowing that the power is an integral part of herself, not an extra that she should switch on and off, always mindful of the circumstances. It is the moment when Buffy recognizes, in the first episode of Buffy the Vampire Slayer that she cannot simply stop slaying vampires with a “been there done that, moving on” attitude but is, for better or worse, always the Slayer. It is when the titular character of the Chilling Adventures of Sabrina realizes that it is not mandatory to move from a predominantly human life to living exclusively as a witch on her 16th birthday, but that she has a choice, and can even choose to embrace both parts of herself. It is even when Paris Geller of Gilmore Girls– her superpower clearly being her personality, for better or worse – feels like she is “not genetically set up” to date, only to realize that a college guy is interested in her exactly because of her personality, no compromises necessary – and he even has a Zagat. It is when someone, be they a hero or a high schooler (sometimes both simultaneously), knowing the weight of responsibility and the wonders of possibility that come with it, embraces their uniqueness to lead the life that they choose to lead.

Panka Bencsik is a PhD Candidate at the University of Sussex (England), and she calls the US, the UK, and continental Europe all homes. Beyond her academic research, she is interested in cultural criticism, and in particular how pop culture's presentations of social roles change over time, and what it means for audiences to watch these changing representations.