Netflix's "Someone Great" Highlights The Power Of Bouncing Back With Girlfriends 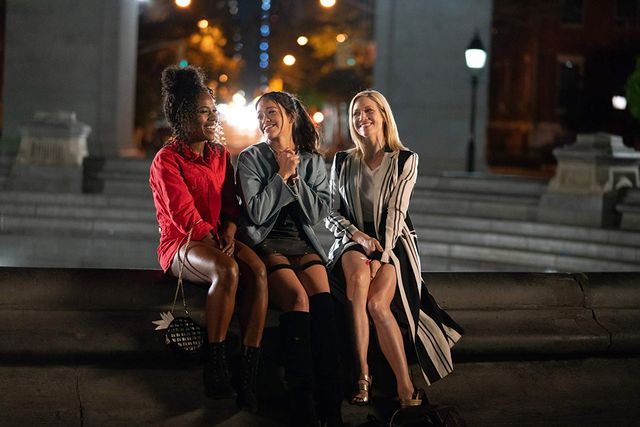 Someone Great, written and directed by Jennifer Kaityn Robinson, is the feminist-friendly Netflix film that disrupts the paradigm of a traditional rom-com. It’s a story that speaks to a generation living in an age of individualism, a time when self-love has reached an unprecedented level of importance. The self-love revolution has boosted our emotional intelligence, which has made us question the patterns and values that our parents and grandparents lived by.

This is not a story about a man and woman who were meant to be together and therefore live happily ever after. Instead of glorifying heteronormative romantic love this film supports the “radical” idea that our best friends can be our soul mates. The beginning of the film digitally unpacks a nine year relationship through a display of texts, photos, social media posts, and emails exchanged between Jenny (Gina Rodriguez), a successful music journalist and her ex, Nate (Lakeith Stanfield).

Someone Great is about healing and navigating a breakup with the support of loved ones. Nate is not antagonized. By the end of the film, and after a compilation of flashbacks, we realize the magic that can come from ending a long-term relationship. Throughout the film, which spans an entire day, Robinson highlights the importance of emotional growth. This theme is stretched upon the characters, as Erin (DeWanda Wise), an independent Black lesbian, grapples with insecurities about adulthood and her commitment issues, as she struggles to say I love you to her new girlfriend. While Blair (Brittany Snow) initially epitomizes the basic white friend, later shakes off this persona, embraces “Bad Blair” and ends her dry romantic relationship.

Youth seems to be one of the principal characters. It’s exhibited in the form of selfish behavior and irresponsible decisions: heavy drinking, overspending, and substance abuse. Like many of us post-breakup, Jenny reeks of recklessness. It’s a scent we’re all familiar with because it smells like our twenties.

Robinson told a story about heartbreak and incorporated a dope playlist, all while celebrating the quirks of living in New York City.

This place is kind to the broken-hearted because there are endless distractions, but in Jenny’s case walking through the city is like going through an archive of her and Nate’s relationship. When she’s seared by the reminders, like a Selena song playing inside her local bodega which paralyzes her with sadness, she cry-sings it out with her girls before being kicked out by the irritated owner. At one point she enters an awkward micro therapy session with a stranger on the subway platform, because if you’ve lived in a metropolitan city long enough this peculiar kind of interaction is bound to happen.

The film culminates with a haphazard chain of events that leads the three women to Washington Square Park. It’s a warm, funny and familiar exchange between friends, much more romantic than any display of affection I’ve seen between two people at the end of a typical rom-com.

Jenny revisits her brief encounter with Nate that night, when she saw him at a party and walked away. “I guess in that moment I was choosing myself,” she says wistfully. “It’s not our journey anymore, it’s mine.”

Following a graceful hurl, Jenny links arms with the loves of her life. In solidarity and in a true New York manner they leave the park in search of tacos.

Watch Someone Great now on Netflix.

Everything You Need To Know About The Bechdel Test

Tags: Gina Rodriguez , LaKeith Stanfield , DeWanda Wise , Brittney Snow , Netflix , rom-com , New York City
Support Feminist Media!
During these troubling political times, independent feminist media is more vital than ever. If our bold, uncensored reporting on women’s issues is important to you, please consider making a donation of $5, $25, $50, or whatever you can afford, to protect and sustain BUST.com.
Thanks so much—we can’t spell BUST without U.