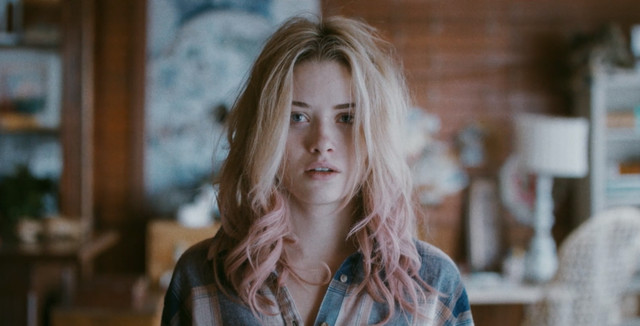 “My name is Aubrey Parker. I broke into my dead friend’s apartment. Who the fuck are you?” Aubrey (Virginia Gardner) says combatively to a walkie-talkie she found by her friend’s bed in a wood-paneled, cabin-like dream of a bedroom. It’s New Year’s Eve and Aubrey’s best friend Grace is dead, leaving behind a group of mourners, a tombstone with the epitaph “Always Right,” and a secret task that she expected Aubrey to be able find out about and carry out. In response, Aubrey has barricaded herself in Grace’s apartment, cocooning herself in how Grace has scrapbooked their memories on her walls, written it into the fabric of the home, so that it’s everywhere she looks.

Breaking into Grace’s home and essentially holing up in there until the food runs out is a tribute Aubrey is more comfortable with. She already left the wake early, unable to handle the raw emotions punching her in the gut—and the feelings prompted by Grace’s cousin telling her, “I don’t think I ever had a conversation with Grace where you weren’t mentioned.” But when Aubrey wakes up on a snow-dusted New Year’s Day, she finds that everyone else in town has vanished. The world, somehow, has ceased to exist, and she’s the only one left—she and a mysterious voice on that walkie-talkie. Aubrey, the mysterious voice, and a bunch of frightening alien creatures that were drawn to Earth via a secret sonic signal, and, weighing her down through it all, the grief.

It’s often said that the thing that’s scariest in horror films is what we don’t see, rather than the guy with the knife. Our own anticipation is what creeps up on us and sends chills down our spines. Starfish was written, directed, and scored by A. T. White, primarily a musician by trade, and it’s completely fitting in how it uses sound to fully evoke the horror elements of the story in a way that more expensive visual effects could only fail to describe as effectively. Of course, the central narrative of a story that stubbornly refuses to bend to its will is the quest for a bunch of tapes—a mixtape that will save the world, somehow, if Aubrey can only put it together and blast it from the radio tower in town. The sharp strings that return throughout the film as a motif heighten our anxiety as we stumble along with Aubrey, wondering where the heck everyone has gone, what that awful sound is, what those creatures are. Similarly, the organic, clicking, almost insect-like sounds that herald the faceless creatures’ presence are perfectly constructed for maximum disgust and dread. Towards the end of the film, the high-pitched sounds used in a dramatic moment are perfectly suited for the haunting, surreal imagery they accompany.

The largely episodic story of Starfish is reportedly based on White’s experience in losing a friend, and so even when the science fiction aspects of the story fail to generate needed urgency, the emotional tone—the listlessness, the emptiness of loss—is exact and precise. The escapist power of music—its ability to transport us to places we never thought possible—is brought to life on the screen in ways both obvious and more subtle.

Starfish could have followed a more straightforward, step-by-step narrative by going Thirteen Reasons Why (the book, not the show), where the recovery of the tapes becomes a quest of sorts, and where the recovery of each tape triggers her memories in a way specific to that tape and its location, and allows us to see more of the flashes in her past that she regrets now. For better and for worse, though, the storyline is not structured as such, instead focusing far more on its protagonist than on her journey, ultimately (and ironically, for a movie about an apocalyptic alien invasion) working in a more realistic milieu. Aubrey’s memories of the things she’s done aren’t treated as rewards for us to learn about, but as genuinely intrusive thoughts that compound her grief and pain, often causing her to bleed between nightmares and reality. In one memorable moment, she slips out of consciousness, comes face to face with one of the frightening creatures she’s been avoiding, and then awakes violently, suddenly, in the middle of punching her own hand bloody against a wall.

When we experience a tragedy, it’s understandable when we want the world to stop, to cease to exist, to allow us to process our grief on our own time. Grace, a person of nearly unspeakable importance to Aubrey, has ceased to exist, and therefore Aubrey is fairly ambivalent about whether the world outside Grace’s apartment walls should continue as well. Virginia Gardner essentially carries the entirety of Starfish on her shoulders as basically the only person left, and she proves to be up to the task, conveying Aubrey’s turn from nihilism to purposefulness and everything in between. Even when the film itself drags, Gardner is engaging to watch.

Aubrey even admits to a perverse sort of pleasure in everyone else being gone, confessing to no one in particular that her longtime dream was for everyone to just disappear. Her world is gone, in a way, and the rest of the world also being gone allows Aubrey to hide away and wallow, allowing the grief and guilt over mistakes she made in her friendship with Grace to consume her completely; if there’s no one else outside that door to wait for her to stop grieving, to leave behind this last trace of Grace, then she never has to stop. She can experience this perfect heightened emotion forever.

Top photo via We Are Tessellate / Starfish