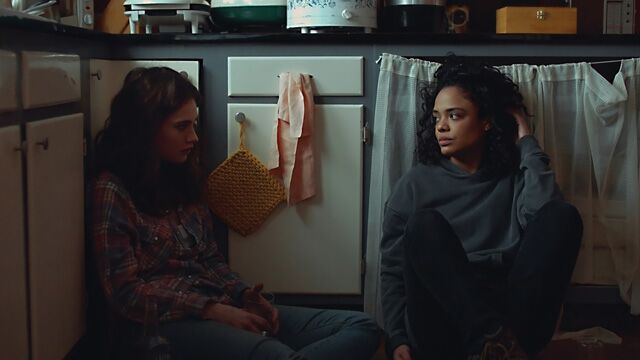 Little Woods
Written and directed by Nia DaCosta
Out April 19

Writer/director Nia DaCosta’s first feature film is a drama centered around two sisters, Ollie (Tessa Thompson) and Deb (Lily James), living below the poverty line in fictional Little Woods, North Dakota. Ollie is on probation after an arrest for illegally bringing prescription pills for her terminally ill mother (and a few others) over the Canadian border. Since her arrest and her mother’s death, Ollie has been getting by selling coffee and breakfast food and taking in laundry—staying on the straight and narrow. But then, two financial crises hit: the bank tells Ollie she has one week to start making payments or her late mother’s home will be foreclosed upon; and Deb, already a single mom, is pregnant and wants an abortion. They need cash fast, so Ollie temporarily returns to dealing drugs.

Little Woods is all about financial insecurity—as soon as one money crisis is solved, another one hits. And by setting Deb’s unplanned pregnancy in an abortion desert, DaCosta sends a message about the need for improved clinic access. The heart of the movie is the complicated relationship between the two sisters, and Thompson especially gives an incredible performance. With this feature, DaCosta proves she should have a long career ahead of her. 5/5