"Family" Is Full Of Laughs (And Juggalos) 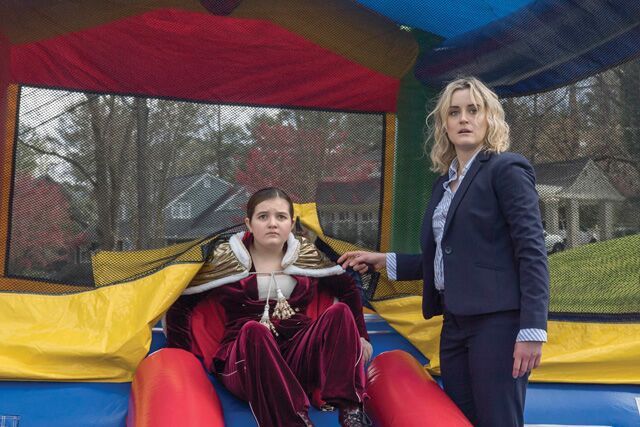 Family
Written and directed by Laura Steinel
Out April 19

In Family, protagonist Kate (Taylor Schilling) is so hyper-focused on career that she puts family last—and believes her co-workers should, too. She makes fun of her assistant for letting her adult brother move in with her; she voices doubts that a colleague about to take maternity leave will ever return to work; and she advises a new hire that to get ahead, her job has to become her entire life. Then she gets a call from her brother: his wife has a family emergency, and he needs Kate to take care of his preteen daughter for a few days. That daughter, Maddie (Bryn Vale), is delightfully weird—she turns sticks into “weapons of nature,” she’s constantly practicing magic tricks, and she only eats chicken parm. When Kate discovers that Maddie is skipping ballet to secretly take karate, the two begin to bond. Under Kate’s care, Maddie befriends a group of teenage Juggalos and decides to join the Juggalo “family” herself.

There are some cringey jokes about Kate’s single, career-lady status and preteen Maddie’s weight in this comedy, but the two actresses will definitely make you laugh—as will Kate McKinnon, in a supporting role as a controlling suburban mom. In the end, though, Family is yet another uptight-career-woman-learns-how-to-loosen-up story—with some added Juggalos. 3/5

"Irreplaceable You" Is The Perfect Romantic Dramedy For 2018: BUST Interview