What "Josie and the Pussycats" Taught Me About Capitalism, Government Mistrust, And Halter Tops 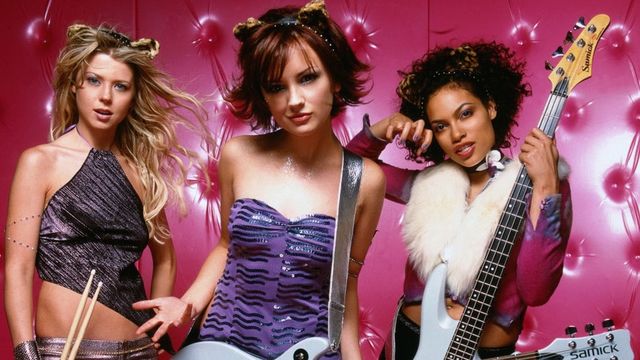 The other day in the BUST office, I was asked to write a piece about the misunderstood 2001 film Josie and the Pussycats.

I nearly fell out of my chair. Me...writing about one of my all-time favorite movies….a dream come true. Arguably, there is no one else on the planet more equipped for this very task, as my current Twitter bio in fact reads "#1 Fan of the film “Josie and the Pussycats."

I can assure you that I am not messing around when I make that claim. Check my car stereo for the one CD I keep in there - it’s the soundtrack.

Unlike my recent work detailing my feelings toward The Bell Jar and Daria, I have been an active fan of Josie from the very beginning, as I actually was a conscious human being when the film was first released and I made my dad take me (why I was not whisked away during the risqué Du Jour opener “Backdoor Lover,” I’ll never know). I have been keeping the flame alive for that movie ever since I first saw it, spending years forcing friends to watch it on VHS when they came over for a sleepover. It’s a silly film, yes, but it also served as a critical commentary to the culture of the early aughts.

Josie and the Pussycats centered around a trio of women based on the Archie Comics and the subsequent 1970s cartoon. The movie brings the characters into the 21st century, focusing on the band’s journey from small town musicians to worldwide icons. They get famous very quickly, thanks to Mega Records’ need for a hot new thing to promote (and a patsy to take the fall). The movie poked fun at the TRL-boy band era of music of the time, and in a recent interview with BuzzFeed News, directors Harry Elfont and Deborah Kaplan pointed out how that contrasted with the anti-corporate ennui of the ‘90s:

"We were coming out of an era with Nirvana and Pearl Jam and Sonic Youth, bands that really encouraged dissent and individuality…[i]t was like the music industry suddenly decided we need to course-correct and feed everybody what we want them to buy and promote corporate culture and not be like, 'Down with corporations.' It was kind of a reaction to that. We saw it happening."

And what better way to say “down with corporations” than to allege a conspiracy taking place between the United States government and the music industry? The villains of the movie, Mega Records executives Fiona and Wyatt (as played by PARKER POSEY and ALAN CUMMING)*, have teamed up with the government to place subliminal messages in popular music so they can get teenagers to chase after trends and stimulate the economy. The plot holes are there, and the premise is a bit flimsy (why are these subliminal messages only affecting teens if everyone can hear this music?), but it served a larger point about the artificial and transient nature of fame. Plus, it taught me about being skeptical towards the government which, as this film premiered within the first few months of the Bush administration, was something that I took to heart.

The point that proved especially prescient was the amount of product placement in the movie. In fact, according to BuzzFeed News, “the directors went out of their way to ensure that almost every single scene featured at least one piece of product placement.” From billboards, to the girls’ hotel rooms, to the planes they fly, everything has been prominently sponsored by a corporation. Since there have been products to place and screens to place them on, product placement has been a thing. It wasn’t a new phenomenon in 2001, and it’s not a new phenomenon now. But with the rise of social media spon-con and “influencer” culture, we are constantly bombarded with cleverly disguised advertisements that might not be as heavy handed as a pop band telling you that Gatorade is the new Snapple, but still prey upon our social anxieties and FOMO in order to hawk unnecessary products.

Even just over the course of a simple walk from the quiet street in Greenpoint where I live to the more flashy Williamsburg, I am constantly bombarded with corporately sponsored street art trying to capitalize on the cachet of the neighborhood, the paintings changing so quickly that I get brand whiplash. Yes, paintings. True to the (sometimes try-hard) bespoke nature of Brooklyn culture, brands like Nike and Bumble are forgoing your typical cut-and-paste ads in exchange for hand-painted walls. It’s a bit like a hipster Disneyland, and it’s not unlike the fast-paced frenzy of product placement in Josie and the Pussycats.

As much as I appreciate the movie’s larger themes, I’ll admit - much of my early appreciation for it comes from a surface level love of the fashion and the music. For being a movie so heavily steeped in its time, those elements have remained surprisingly timeless, even though the body glitter budget for the film must have been astronomical. Everything is shiny and metallic, low cut and low rise. Tara Reid does not wear a single shirt with sleeves in the entire film, and that alone is the most early aughts sentence I have ever composed. 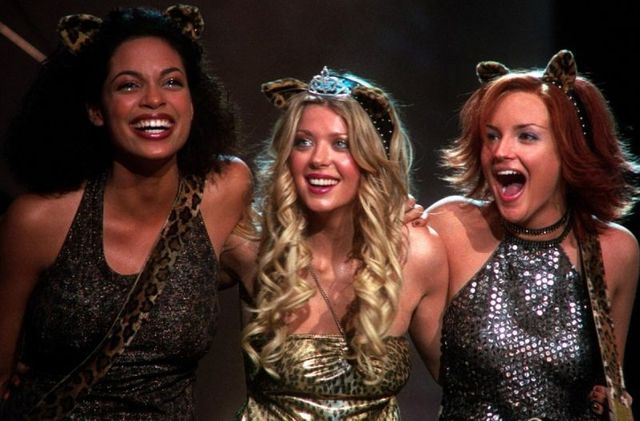 Now let’s talk about the soundtrack, because it truly SLAPS. The fact that it’s filled with so many certified bangers was not a coincidence. Just look at the people who put it together, according to an oral history put together by The Fader: "Legendary R&B producer Kenny “Babyface” Edmonds served as executive producer and worked on half the songs...Fountains Of Wayne’s Adam Schlesinger produced the other half, while The Go-Gos’ Jane Wiedlin, that dog.’s Anna Waronker, Jellyfish’s Jason Falkner, Gigolo Aunts's Dave Gibbs, and Adam Duritz of Counting Crows all contributed melodies and lyrics." Plus, Josie's singing voice was provided by Kay Hanley of Letters to Cleo!

Why it sounds like the best fake band in the world is because it really does have the pedigree of a nineties supergroup. I constantly had it in the background as I played with my Barbies in kindergarten, and I frequently listen to it to this day.

Not as gritty as Ladies and Gentlemen, The Fabulous Stains, not as irreverent as Spice World, Josie and the Pussycats still deserves another viewing. It’s a celebration of female friendship, halter tops, and taking on giant corporations. What’s not to like?

Rosario Dawson On Her Family, Her Activism, And Why She Calls "Death Proof" A Chick Flick: From The BUST Archives

Tags: Josie and the Pussycats , girl bands , movies , Rachael Leigh Cook , Rosario Dawson , Tara Reid
Support Feminist Media!
During these troubling political times, independent feminist media is more vital than ever. If our bold, uncensored reporting on women’s issues is important to you, please consider making a donation of $5, $25, $50, or whatever you can afford, to protect and sustain BUST.com.
Thanks so much—we can’t spell BUST without U.