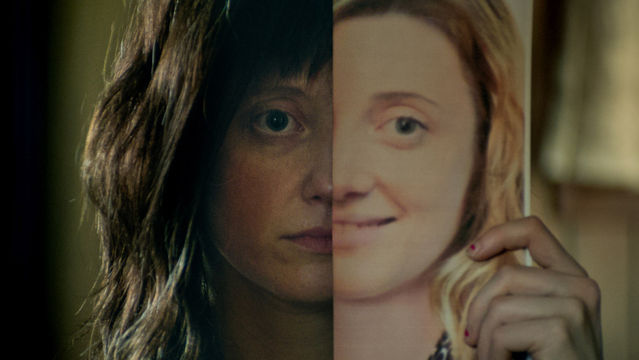 It’s winter somewhere in New Jersey; or maybe it’s always been cold like this, the ground covered in gray slush, the sky bleak and metallic. For Nancy (Andrea Riseborough), every day is the same, given over to a listless temp jobs and to caring for a sick, nosy mother (Ann Dowd), whose dull complaining and moaning roars in the background like so much white noise. However, Nancy finds ways around the mundanity of her life: by concocting scams, in depth and in detail, where she has any kind of life but her own. To her coworkers, she’s mysterious, low-key cool enough to have visited North Korea and taken photos; to Jeb (John Leguizamo), she’s a beacon of hope, a mother who lost a baby, the writer of a pregnancy blog who’s given him closure after the premature death of his own child.

The biggest lie shown in the movie Nancy, however, is the one that Nancy might even partially come to believe: that she was kidnapped as a child by the woman she calls her mother, and that her real parents are the nurturing, tender Leo (Steve Buscemi) and Ellen (J. Smith Cameron), whom she sees on television discussing their lost daughter. The idea comes from grief as much as from boredom: when her mother passes away in her sleep, Nancy finds that her staid life has become rudderless. A quick search through her mother’s paperwork reveals a missing birth certificate, and she certainly resembles a rendering of the adult version of the kidnapped little girl. Much like the protagonist of the film, Christina Choe’s Nancy is haunted and haunting, taking on new qualities and characteristics as quickly as it sheds them. It’s tempting to place Nancy in the category of “stories about unsympathetic female protagonists/antiheroines,” but Choe’s creation is decidedly much less of a charismatic act of arson à la Gone Girl's Amy Dunne or a self-immolating blaze à la Sharp Objects' Camille Preaker—her Nancy is a person profoundly uncomfortable with herself, eager to shy away from any kind of fixed identity.

When Nancy finally meets Leo and Ellen, who accept her (barring the approaching DNA test) with a mixture of relief and trepidation, Choe makes you almost hope against hope that Nancy really is their lost daughter, although the nature of Nancy’s previous lies immediately cast the revelation into doubt. Not because Nancy having been kidnapped as a child would be okay, but because being this child of warm and loving parents means that Nancy can allow herself to bask in parental unconditional love, to experience the warmth of unselfish affection, to have a re-do of the upbringing that led to her becoming so isolated and lonely. She’s had to mother her own mother so the opportunity to be a child again—the promise of being cared for by parents—is inordinately appealing.

Riseborough, so appealing in Battle of the Sexes and amusingly histrionic in The Death of Stalin, is astonishing in the lead role. Despite the dyed-black hair and fur-collared coat, she’s someone you might pass on by, if it weren’t for the dead-eyed stare. When she compares her hollow face to the smiling girl in the rendering, her face looks like it’s about to crack open. Each smile is shaky, unnatural, as if it’s something she hasn’t done a whole lot of, like her cheek muscles are rusty. Steve Buscemi’s performance is especially gentle, while J. Smith Cameron’s character is a little more high-strung, a little more desperate to believe that this sad woman is her missing girl. Ann Dowd tones down the sinister vibe from The Handmaid’s Tale, becoming a much more mundane daily terror in Nancy’s life, while Jon Leguizamo’s attentiveness provides a spike of energy early in the film (and a respite from Nancy’s monotony).

Nancy’s not running scams for money and fame like Anna Delvey and the other ladies of the 2018 Summer of Scam, but seeking a much more ephemeral score. Indeed, Choe almost hints that Nancy’s story about losing a pregnancy might not be entirely false, complicating how we see Nancy’s interactions with her “parents.” A flippant comment from Nancy’s mother early in the film piques our interest, while Nancy herself tries herself to Jeb when she’s caught by arguing that she did lose a baby—just a while ago. Was Nancy reliving her own loss and transforming it into a fiction that aided real grief, or was she merely hoping to gain attention and sympathy from a stranger? Is that what’s she doing with Leo and Ellen—spinning a lie they all want to be true, or digging up a possible truth in painful ways? Choe teases us with possibilities, before ultimately coming to a resolution that only leaves us with more questions.

Tags: Nancy , movies , Andrea Riseborough , Christine Choe
Support Feminist Media!
During these troubling political times, independent feminist media is more vital than ever. If our bold, uncensored reporting on women’s issues is important to you, please consider making a donation of $5, $25, $50, or whatever you can afford, to protect and sustain BUST.com.
Thanks so much—we can’t spell BUST without U.