"The New Romantic": Jessica Barden Shines Despite A Slight Script 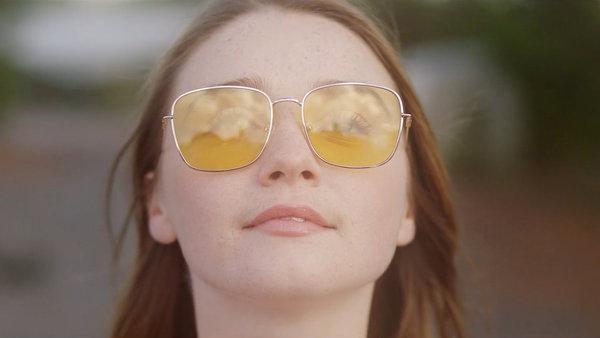 One of the best pieces of first-person journalism I’ve ever read was written in my college’s newspaper by a fellow student, who did what the protagonist of The New Romantic does—try out being a “sugar baby” for the intrigue of having a new, slightly taboo life experience. (For those unfamiliar with the term, a “sugar baby” is commonly a young, attractive person who enters into a relationship with an older individual—the “sugar mommy/daddy”—in exchange for money and/or expensive gifts.) The difference between my fellow student did, and what Blake (played winningly by Jessica Barden) does in The New Romantic, is that Blake views her burgeoning sugar baby relationship as an experiment in gonzo journalism that will hopefully win her a generous cash prize—establishing Blake as a fairly mercenary and entertainingly self-absorbed protagonist right off the bat.

Blake hasn’t found the kind of romance worthy of a Nora Ephron film during her time in college (understandable, and sadly realistic); her attempt at a Carrie Bradshaw-lite column in her college’s newspaper is frustratingly fruitless, and is promptly cancelled early in the film by her editor Matt (a wry Avan Jogia). One accidental drivers’ license swap in a liquor store leads her to meeting the confident, savvy Morgan (Camilla Mendes), a proud sugar baby, who promptly sizes Blake up and invites her to join the fun. While Blake is initially hesitant, put off by the idea of being sex worker-adjacent, she begins to delve into the lifestyle on an almost anthropological level, interviewing Morgan ostensibly for her column, but also because she’s curious. One poolside weekend getaway with Morgan later, Blake has her sugar daddy—and her revamped column—all wrapped up in a bow when she meets Ian (Timm Sharp), the socially-awkward, independently wealthy owner of said pool. Meanwhile, Blake must also deal with an increasingly insistent—but emotionally fraught—connection to one of the other writers for the college paper, Jacob (a totally unrecognizable Brett Dier), who’s competing for the same journalism prize.

Blake’s total myopia (both unintentional and enforced) when it comes to anticipating that her actions might have consequences unexpectedly recalls the character of Tess Harding in Woman of the Year (1942), played memorably by Katharine Hepburn. Perhaps I’m making that connection because both characters are journalists who don’t realize the impact they have on others, and that others around them can be hurt. Jessica Barden gives one of the most intriguing performances of the year in The New Romantic, deftly managing her character’s conflicting layers of emotional naiveté and naked ambition. Blake may aspire to be in love, but she’s also perfectly fine with getting the physical trappings of love—or “romance,” as she puts it when negotiating the terms of her relationship with Ian. Romance, for Blake, is the grand gesture of Ian replacing her bike with an electric moped—a “sex moped,” Blake notes giddily when it’s delivered to her the morning after they consummate their relationship. If she can’t have a rom-com-worthy heartfelt connection with somebody, she’ll happily take the signifiers of those relationships instead. She doesn’t feel guilt about mining her love life for column inches, insisting that being technically anonymous and using pseudonyms makes everything okay. She blithely writes about a failed hookup with Jacob, humiliating him but merely amusing her, as if she’s dissociated enough from that moment of intimacy to write about it like it happened to someone else.

And yet Blake is still incredibly childish and innocent in many ways, which slips out in the most unexpected of moments—her immature apple-cheeked flash of glee at the idea of getting presents from Ian (who doesn’t like to write checks), or her declaration that she feels “cartilage-piercing dangerous,” when she gets on her moped for the first time. (It falls to her best friend Nikki, played by Hayley Law, to point out that getting your cartilage pierced isn’t exactly the height of danger.) Her idea to have Ian write a letter of recommendation for the journalism award he doesn’t know would be about their relationship is not exactly the thought process of a mature adult.

The New Romantic (the debut feature of writer-director Carly Stone) is too slight, both in terms of theme and general characterization, to match up to Barden’s performance (which will probably not get the attention it deserves). There’s an interesting underlying question of whether all relationships are ultimately transactional, and if Blake’s sugar-baby relationship is just a more literal version of the kinds of ways all people use one another, but it’s not addressed in much depth.

At a quick barely-seventy minutes, there’s plenty of attention given to Blake, but at the cost of the secondary and tertiary characters that even an extra five minutes could have ameliorated. Morgan disappears after about twenty minutes, making me wonder if Camilla Mendes only had one day available for shooting. Jacob and Matt and the world of the college newspaper have a realistic texture and dynamic, but as the competing quasi-love interest, Jacob is developed enough to make him compelling. Hayley Law fares similarly poorly in a role that exists to support and cheer on the protagonist, with no subplot of her own. She goes to parties with Blake, makes pot-laced cupcakes, and functions as a sounding board for Blake’s troubles, but that’s about it. If The New Romantic is interested in examining how people relate to one another, and what they get out if it, it’s not clear what Nikki gets out of her relationship with Blake. Jacob, while a reactive character, is at least given room to have his own goals and his own complicated attraction to Blake.

Lastly, Ian’s transformation from benign and chivalrous to outright sinister and hurtful comes a little too quickly. In hindsight, the grand gesture of Ian taking her bike and giving her a moped (without asking!) does take on suitably uncomfortable overtones, becoming less about showering Blake in affection in object form that it does about controlling her and her movements through the world. And while Ian’s behavior can be explained by interpreting his character as turning on that kind side of himself and easily shutting it off when he’s not getting his way, it comes across as a little abrupt. The movie itself is ambivalent as to whether the sugar-baby relationship eventually going south is because of Blake’s faux-jaded thoughtlessness, or because Ian’s just not a good guy. With just a little more time given to these characters, The New Romantic would have been a stronger, more robust film.

The New Romantic is available on VOD now.