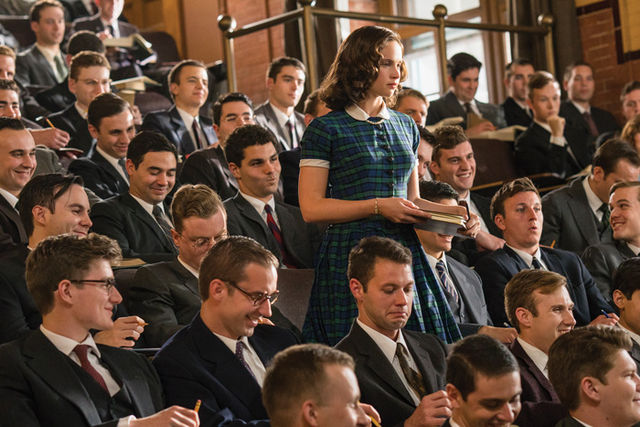 In such a tumultuous and often horrifying political era, Supreme Court Justice Ruth Bader Ginsburg has been a consistent hero and symbol of hope and resilience. (I mean, the 85-year-old returned to work in November just days after fracturing three ribs!) In Mimi Leder’s stunning biopic, though, viewers first meet the notorious RBG (portrayed masterfully by Felicity Jones) several decades prior to her Supreme Court days—specifically, in a Harvard Law classroom dominated by white men. As one of nine female students, Ginsburg has to work doubly hard—and then even harder, when her husband and fellow law student Marty (Armie Hammer) is diagnosed with cancer. As he undergoes treatment, Ginsburg takes on his classes and schoolwork alongside her own, facing aggression and dismissal from other students and the school’s dean (Sam Waterston) alike. The film then shifts gears to Ginsburg’s momentous 1972 gender discrimination case, an event that advanced the trajectory of both her career and our nation’s understanding of sex-based discrimination.

With a stellar supporting cast including Justin Theroux and Kathy Bates, and even a small cameo from the real RBG herself, On the Basis of Sex is a lush, emotional celebration of one of the greatest trailblazers of our time. (5/5)