"The American Meme" Is Most Disturbing Movie Of The Year 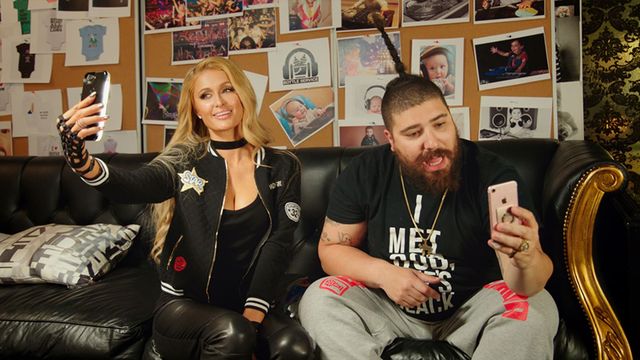 There is no fictional cautionary tale you can devise about the horrors of social media that is both as insightful and depressing as The American Meme. Directed by Bert Marcus, The American Meme unpacks and reveals the ecosystem of social media celebrity with incredible thoughtfulness. The American Meme isn’t a story about “social media gone wrong”—there are no stories about how a nude pic ruined someone’s public relationship, or how an offensive tweet cost someone a job. As you watch The American Meme, it dawns on you—in a horrifying way—that for many of the people Marcus interviews, including DJ Khaled, Paris Hilton, The Fat Jew, and The Slut Whisperer, this is a story about social media and self-branding gone right. This fame, this endless attention, is what each of these now-celebrities wanted. They have gone from counting mere likes and retweets to having the power to will a best-selling brand of rosé or fake line of baby DJ clothing into existence. Essentially, these celebrities have the power to create and shape their world, to control their own destinies, to have anything they could ever desire. This...whatever it is...is the happy ending, the American Dream of 2018.

The unspoken question The American Meme asks is: and then what? If I have everything I want—followers, a brand, appearances on Jimmy Kimmel, notoriety or fame, a house in Calabasas, take your pick—why am I still so unhappy? What kind of worth does my life have, and why is it not enough? The American Meme doesn’t quite have the answer, because none of these celebrities has the answer, because the answer isn’t as simple as “quit social media and make friends in real life.” These social media personalities are experiencing profound loneliness, restlessness, isolation, and that drive to always be productive that many of us feel on a daily basis—it’s just that their reaction to this fundamental, inexplicable problem with their lives is amplified for millions upon millions of people via social media, and creates a feedback loop. The fans demand content, validate the creator when new content arrives, gobble it up, and demand more, with the dreaded unfollow (and promise of abandonment) a mere click away. And if celebrities don’t have their followers, these people watching everything they post about themselves on social media, then who are they? Are they just…alone? Alone, like all of us are?

With The American Meme, director Bert Marcus shows us the dark side of the commodification of the self that is all-too-prominent—and is now expected in contemporary life. It’s an economy of loneliness; these stars think that the only way to be loved is to become something consumable, to turn yourself from a complex matrix of ideas and thoughts to something catchy and snappy and marketable. And yet this movie is no hand-wringing thinkpiece from a legacy publication about how the Young People and their Insta-whatevers are ruining society, written with an insufferably lofty tone by an outsider. What Marcus does, radically enough, is treat the social media personalities he interviews for this film as real people, rather than subjects in a study or avatars of moral degradation. He doesn’t appear in the film to ask the questions, and yet it has to be Marcus who slowly encourages these social media stars to examine their own lives on camera beyond the elevator pitch, the self-aggrandizing sell. Doesn’t it? Or is the honesty we see when former Vine star Brittany Furlan reveals her history with mental health struggles, or when Kirill Bichutsky talks to his mother about his hopes for the future, merely another side of the product?

Interestingly enough, the first few minutes of the The American Meme seem to be a prelude to a movie that didn’t end up getting made—a more even-handed, shallower examination of how different social media stars got famous and how they use their platforms. Early on, Emily Ratajkowski (initially of “Blurred Lines" fame) talks about using her digital reach to be authentically herself, bypassing the era where studios controlled their stars’ every move, and providing one potential angle the movie could have taken. Hailey Bieber (née Baldwin) and DJ Khaled pop in there for a few thoughtful quotes; Matthew Felker (also known as the guy from the “Toxic” video) talks about the effect being in a Britney Spears video has had on his life—and he deactivated his social media, at least temporarily, to get away from it all. But on the whole, it’s as if the filmmaking crew set out to make one movie about social media fame, and then it got way too real, too fast.

The real meat of The American Meme takes the form of in-depth, startlingly vulnerable, and uncomfortable conversations with Brittany Furlan, Kirill Bichutsky (The Slut Whisperer), and Josh Ostrovsky (The Fat Jew). Bichutsky in particular, who became social-media famous for posting photos of himself pouring champagne on nearly-nude girls in clubs, is a fascinating character. In order to not be completely horrified by his cavalier attitudes towards the often-offensive content he creates, you sort of have to treat him as a character at times; you have to keep him at a distance. The most gut-punching scenes in The American Meme take place when Marcus interviews Bichutsky's parents, who can barely mask their disappointment in the career their son has chosen.Bichutsky is, in fact, a talented photographer, and at one point wanted to become an animator for Disney, but he ultimately built his brand on marrying trashy club photography and crude humor inspired by Dane Cook. Nearly every time she’s on camera,Bichutsky's mother appears to be holding back tears as she talks to her son, seeing in him the sacrifices she and her husband made, immigrating to the United States from Russia only to raise a son who has made it his mission to expose the “dark corners” of humanity via social media, via photos of drunk girls. Early on, Bichutsky is presented as self-aware, sarcastic, and totally in control of the life he’s created for himself. But at the end of the film, he wakes up drunk in a hotel room, dazed and groggy and melancholy. It’s clear that at the end of the day, there’s still something missing.

Marcus’s interviews in The American Meme with Paris Hilton (recurring throughout the film) once again confirm that she’s smarter than you might give her credit for. She’s hailed by other interviewees as the originator of the kind of viral celebrity who’s famous for being herself; for a while there in the mid-2000s, she was truly everywhere. There’s a reason Hilton has a massive mosaic portrait of herself on her wall (made up of tinier pictures of herself). On some level, she knows that the figure of “Paris Hilton” is nothing more than the sum of all the Paris Hiltons she’s been before: the party girl, the muse, the reality television star, the pop star. When she talks about her social media fans as “family,” is it merely a version of Paris Hilton who feels this way, or does Paris Hilton genuinely believe in her admirers to this degree? Is there an authentic Paris Hilton? Can there be an authentic Paris Hilton, or is she herself in whatever incarnation she currently inhabits, performing “Paris Hilton” twenty-four hours a day, seven days a week until it becomes a reflection of who she is on the inside? Or is her authentic, inner self merely this performative amalgamation of all the Paris Hiltons she’s been before?

The American Meme is on Netflix now.