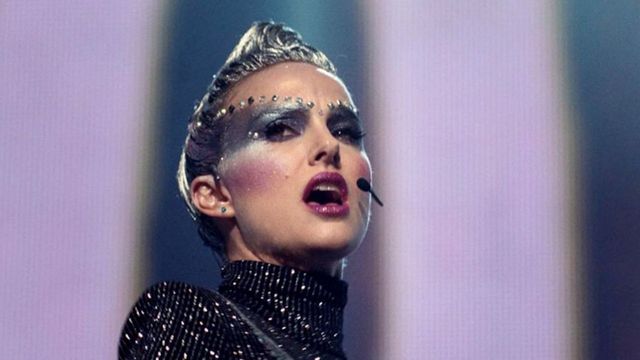 Writer/director Brady Corbet brings us a new kind of faux-doc with this drama about a fictional pop star named Celeste—one name, like Madonna or Cher. Vox Lux's first half shows Celeste's rise to stardom. As a Staten Island preteen (Raffey Cassidy), Celeste survives a school shooting. While she's recovering, her older sister Eleanor (Stacy Martin) teaches her how to write music. Celeste performs a song at a memorial for the shooting victims, footage of which goes viral, and with her career guided by a savvy manager (Jude Law), she becomes a superstar.

While the first half of Vox Lux spans several years, the second focuses on a single day. Celeste is now in her 30s (Natalie Portman), with a teenage daughter of her own, Albertine (Raffey Cassidy again). After hitting a low point due to drinking, drugs, an at-fault car crash, and a racist outburst caught on camera, she's preparing to re-launch her career with a new album, Vox Lux, and an arena tour—until a terrorist attack threatens her plans.

The structure of Vox Lux is interesting (Willem DaFoe provides occasional narration), and there are some fascinating visuals. But the characters aren't particularly memorable, the pop songs are boring yet given lengthy screentime, and the Staten Island accents are all over the place. Corbet gets points for ambition, as does Portman for playing against type. But despite the comparisons, Vox Lux is no Black Swan. (3/5)

Tags: Vox Lux , Natalie Portman , Brady Corbet , Raffey Cassidy , movies , reviews
Support Feminist Media!
During these troubling political times, independent feminist media is more vital than ever. If our bold, uncensored reporting on women’s issues is important to you, please consider making a donation of $5, $25, $50, or whatever you can afford, to protect and sustain BUST.com.
Thanks so much—we can’t spell BUST without U.