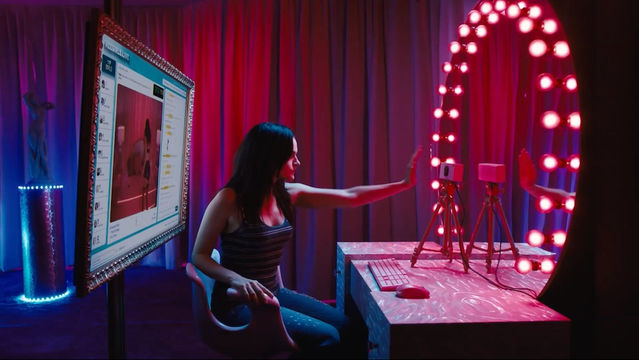 Most sex workers in movies are victims of circumstance, exploitation, coercion, and desperation. Their careers are a last resort. They live on the margins. We definitely don’t root for them to stay in the industry. But Netflix’s new psychological thriller, Cam, created and written by former sex worker Isa Mazzei, directed by Daniel Goldhaber, produced by Blumhouse (the same folks that brought you Get Out) throws out all those tropes, and is a refreshing breath of fresh air.

Madeline Brewer stars as Alice, a popular cam girl who goes by “Lola” online. Alice, a.k.a. "Lola,” is ambitious. She’s hardly a victim of circumstance. She’s driven by a straight-up love for her job—and it’s clear why: it’s her money ticket, her creative outlet, and her passion. It's fun, and it gives her the autonomy to do whatever-the-f she wants. Plus, she’s good at it. Like, really good. But, like those who proverbially fly too close to the sun, just as she’s about to break into the top 10 on her online porn site, she’s locked out of her account and her show is taken over by someone who is an exact replica of her. Faced with harassment by an ill-equipped police department, stalkers, artificial intelligence that’s so eerie it’s almost supernatural, and a mysterious, malevolent hacker, we watch as our hero fights to regain her identity, assert control over her body, and reclaim her autonomy so she can continue pursuing the work she loves.

I sat down with Cam’s writer and creator, Isa Mazzei, to talk about about sex work, her forthcoming book, the mounting perils of technology, and what gives Cam it’s chill factor (spoiler: it’s the patriarchy). 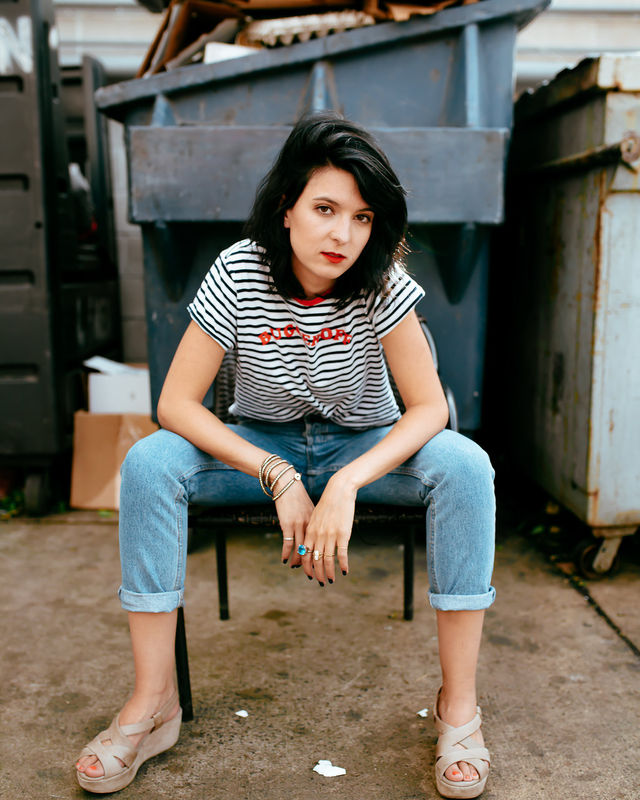 It seems like this film could have been about an Instagram influencer, or a famous YouTuber, or anyone with a strong online presence. Why did you choose camming?

I wanted to to tell a story that would get an audience to empathize and relate to a sex worker, period. At the end of the day, the goal of the film was to help destigmatize sex work and to get an audience to empathize with a sex worker, who is often not the character that you’re supposed to empathize with or be rooting for, and especially not rooting for her to return to sex work. I hope people go into this movie expecting this fun, glitzy thrill ride with a cam girl, and they walk out having rooted for a sex worker for 90 minutes, having empathized and understood a sex worker for 90 minutes. Even if that doesn’t consciously resonate with them, I hope that unconsciously it starts to plant this seed of change where they can engage with sex workers in the real world and legislation for sex workers and women in general a little bit differently.

How much of the film’s plot is grounded in your experience ?

The movie is obviously fiction, but what I love about genre is that it’s a way to put a lot of real things into a film metaphorically. Something that happens to a lot of cam girls, including myself, is that screencaptures of my shows were recorded and put on the internet, not only without my permission, but without any attribution to me. I found that incredibly violating, because all of a sudden I was looking at my own naked body on the internet. It was a like watching a disembodied form of myself that wasn’t tied to me anymore. It was a really surreal and violating experience. I was watching other people take control of this persona that I had created and strip her of anything that connected her to me in the real world.

"I wanted to to tell a story that would get an audience to empathize and relate to a sex worker, period. "

I know you are coming out with a memoir, but are there any other parts your experience you can speak about now?

My book, Camgirl, comes out next year. It’s my memoir, and it goes into the real world side of this. If you read the book, you can see more where I was drawing things from. Lola, for example, is a literalization of this paranoia and anxiety that I felt around my own visual identity. When you’re camming, you are constructing a persona, and you’re choosing which parts of yourself to show people and which parts to keep hidden. There is this slight anxiety that I think we all feel on any form of social media, but especially as a cam girl. When you’re exposing yourself on so many levels, you start to wonder, "Do people actually like me? Or do they just like this persona I’ve created?" "Where do I end and where does this persona begin?" and, "Who am I, actually?"

Do you have any thoughts on separating validate ourselves in real life from validating ourselves online?

I think we all need to be aware that what we are consuming, and what we are putting online, is absolutely curated. We shouldn’t stop going online—I love the internet— but recognizing that what’s online is not real, and it doesn’t actually reflect on me. The amount of "likes" on a picture doesn’t reflect on my actual value in the real world. I don’t have a perfect answer, but really drawing a distinction between who you are in the real world and who you are online, and recognizing that both can coexist and both are really fucking cool, but they do need to be separate.

Cam is scary for a lot of different reasons, but the monsters aren’t as obvious as you’d expect. Where does the real threat come from?

I think the real threat actually comes from the fact that sex work is stigmatized. We judge sex work. We don’t acknowledge sex workers' agencies over their own bodies and their own choices. The police do not, and the rest of society looks at sex workers as "less than," or that they somehow deserve it if something bad or violent happens to them. For a lot of sex workers, when they’re outed, it can be impossible for them to find jobs. It can be impossible for them to be respected in public, or respected in places they used to go. This isn’t just the case for sex workers, it’s for any women that engages in sex acts that are publicized. We’ve stigmatized sex work, we’ve stigmatized women enjoying sex, we’ve stigmatized women having sex, and because we judge it and shame it, that’s where the danger derives from. It also come from men who believe they own or are entitled to women. I definitely encountered this while camming—some men think that because they pay you for one thing, you owe them everything.

" I definitely encountered this while camming—some men think that because they pay you for one thing, you owe them everything."

On the subject of stigma, there is a scene in the film when Alice goes to the police seeking help and they react by sexually harassing her. Is this common?

I have sex worker friends that have gone to law enforcement for help and instead they’re hit on, or expected to endure sexual harassment because of the job that they’ve chosen. For me, the cop scene is so scary because it is literally taken from real life, or said to someone that I know, or someone that I read about. The line that the cop says, “What’s the weirdest thing you’ve ever had to do?” has actually been asked of me by multiple people while pitching the film in a professional setting. I found it so violating. The way they phrased it was always “what’s the weirdest sex act you’ve had to do,” which completely strips my agency out of my own career. I think that many sex workers experience similar things.

Outside of your life, where did you draw inspiration from?

I looked to sports movies and art movies, like Whiplash and Black Swan. In both of those movies, we have a character who goes through hell to fulfill themselves artistically and to fulfill the career that they dream of. No one ever questions, “Why is Natalie Portman doing this?” or “Why is Miles Teller literally drumming until his hands are BLEEDING?” We inherently understand the value of being a good drummer, or jazz musician, or artist, despite the sacrifices and the risk. We don’t inherently understand the value in being a successful sex worker.

Why was it important for you to challenge the media’s portrayal of sex workers?

There’s this misconception about sex work that if you just take your clothes off, you’ll instantly be showered in money. Which is not the case. Sex workers are some of the most entrepreneurial, badass business women that I know. You’re really running a business, and that side goes ignored in media a lot of the time, but is the reality of sex work. What I find so problematic about the way that we represent sex workers in media is that we demand that they either be FULLY empowered, or FULLY victimized. We don’t demand that of any other career. We recognize that there’s nuance within every other career—there are parts of it that you love, there are parts of it that are annoying, there are days when you want to just bitch about your boss, there are other days where you feel on top of the world. It’s the same for sex work. Sex work is just another job that people do.