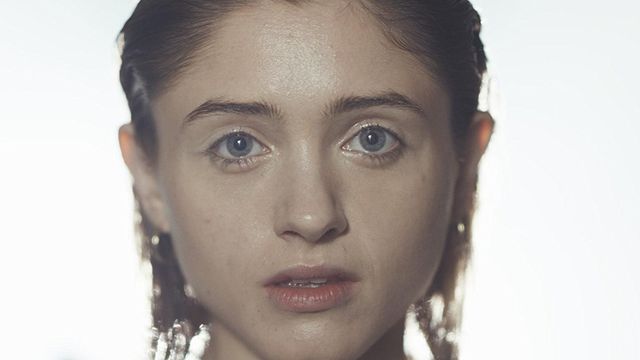 Whether they’re California vampires or a band of orphaned children captained by Peter Pan, lost boys are fallen and forever chasing. In The Lost Boys (1987), leather-clad Santa Carla vampires hunt their prey (while their prey hunts them). In J.M. Barrie’s Peter Pan, the lost boys become lost when they “fall out of their perambulators when the nurse is looking the other way,” and spend their subsequent years clinging to Peter. But where are the lost girls? “Girls,” Peter tells Wendy, “are much too clever to fall out of their prams.”

“After Her” (2018) is a murkier fantasy, a visual poem exploring—not answering—the question of the lost girls. The second short from rising director and cinematographer Aly Migliori (after 2015’s “Knightsville”), “After Her” is an abstract, atmospheric, amorphous 14-minute film that follows teenagers Haley (Natalia Dyer, Stranger Things) and Callum (Christopher Dylan White, The Miseducation of Cameron Post) into the woods. Haley finds an ominous shell-like device in a cave’s depths and subsequently vanishes; five years later, Callum is haunted and swallowed by the mystery. The film fuses echoing sound (white noise, elegiac layered dialogue) and ominous imagery (volatile smoke, inky waters, unanswered phone calls) to form a fuzzy puzzle. What does it mean to be a lost girl? Are we haunted more by what we’ve lost, or by what we seek?

Migliori took inspiration for “After Her” from starmakers of ambient, existential science fiction: Stanley Kubrick, H.P. Lovecraft, David Lynch, Terrence Malick. But the film’s subject matter is entirely modern, and aims to push back against the cisgender white male domination of the genre, both in front of and behind the camera. Beyond her position as a woman in a male-dominated industry, Migliori is an ambassador for Easy Rig, a company sells camera gear designed for women's bodies. With “After Her," Migliori strives to reposition women, reclaim “otherness,” and restructure the typical “missing girl” story. “[The] story [typically] lures audiences with the duality of sexual innocence and wantonness of a gone-too-soon female victim,” she says, “and the journey of the generally male protagonist toward redeeming her legacy, but only inasmuch as it services his own character arc, exploiting her and her traumas as fodder for his narrative.”

In resistance and challenge of the missing girl/white knight cliche, Callum is, Migliori says, “a passenger, not a pioneer." In many ways, he’s a lost boy, silently stumbling as he hunts for Haley. He is lost in the mystery and in the film’s strictly yonic environment: gushing waterfalls, deep foaming caverns, streets conquered by crowds of women and bloodred reminders. Callum lives in Haley’s realm, not the other way around; he only exists in relation to her, surrounded by her, coaxed and guided and taunted by her. He is the follower, not the savior. She is the leader, not the victim. Callum ultimately arrives on an urban street surrounded by dark-haired women on all sides, not another man in sight, making him the “other."

Historically, missing girls are positioned in both fiction and reality as innocent yet hypersexualized, from JonBenét Ramsey to the white-gowned girls of Picnic at Hanging Rock. But Haley is no gone-too-soon girl frolicking in a white lace dress, led sexually astray by external forces; among the things lost in “After Her,” Haley’s "innocence" is not one of them. From start to finish, she is the film’s adventure-seeking, forward-moving force. She beckons Callum into the forest, brandishing a baby’s head mushroom and darting decisively through the trees like a deer. When Callum initially warns her of the danger of what she finds in the cave’s innards, Haley snaps back and soon disappears—but her voice and her memory haunt Callum and lead him back to the cave, back to the device he’d warned her about, back to her. Being lost typically means a loss of agency and a loss of direction, but Haley is in charge of her own narrative and Callum’s, of where they are and where they’re both headed. After she “gets lost,” Haley is stronger and more in command than ever.

The hypnotic imagery of “After Her” flashes like half-formed memories: a peachy sunset over the ocean; Haley sheepishly lighting a cigarette on the sidewalk, wary of passing headlights; smoke clouds curling, rising, and bubbling until truth is obscured and reality lost. The film’s characters are similarly nebulous: their stories are mostly unknown, their personalities undefined, their desires and fears hazy. In which direction, exactly, does the lost girl lead? Questions may be answered in the developing feature-length film, but for now it’s up to audiences to fill in the blanks. “I can speak to these nuanced meanings and intentions, but it’s most importantly a cinematic ride of escapist entertainment that hopefully leads to reflection,” says Migliori, “packed with a lot of vaginas, cervixes, ovaries, and awakened women along the way.”

The lost girl appears too clever to fail. Haley is devoured by darkness, but her voice lingers: “You cannot erase me… Men fall… I will persist.”

"After Her" is currently making its rounds on the film festival circuit, and is set for a spring 2019 release online. A feature-length film is in development through First Hunt Films. Migliori’s third short film, “Twist," is a feminist thriller starring Helena Howard (who just got nominated for the breakthrough actress Gotham Award), will also be released in 2019.