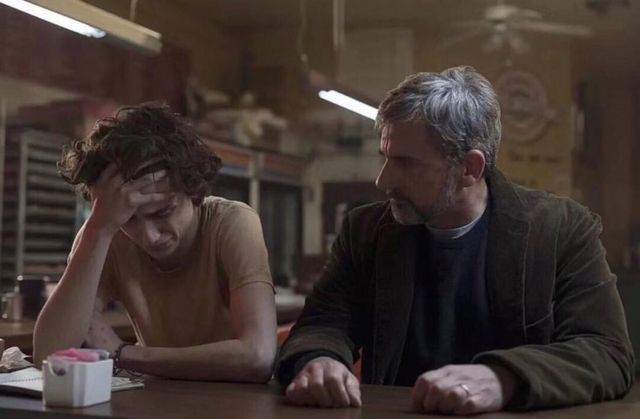 There are still some people out there who think Timothée Chalamet is overrated, or a flash in the pan, or just some nobody that teens made a thing. I personally only associate with Timothée superfans (Chalamaniacs?) so I don’t know any of these people, but I know that they exist. If there’s any justice in the world, these people will see Beautiful Boy and then they will shut up forever.

Directed by Felix Van Groeningen, Beautiful Boy is based on the true story of Nic Sheff, who started battling methamphetamine addiction as a teenager. Nic wrote a memoir about his life titled Tweak: Growing Up on His Methamphetamines, while his father, David Sheff, wrote one called Beautiful Boy: A Father’s Journey Through His Son’s Addiction. Though the credits list both books as the movie’s source material, the point of view seems to lean a little more toward David (Steve Carell), who spends much of Beautiful Boy trying to figure out why Nic (Timothée Chalamet) is the way he is.

The movie never comes up with an answer for this, which is one of its greatest strengths—real addiction is a complex and often unexplainable disease, so it’s a relief that the screenplay doesn’t attempt to tie up Nic’s struggle so neatly. You can sometimes connect his relapses to certain triggers, but when you can’t, you find yourself frustrated alongside David, wondering why no treatment will stick. It’s this nuanced portrayal of a father, grieving a son who’s still living, that prevents the film from straying into cliché or maudlin territory.

That’s also thanks to the fantastic performance of Chalamet, who manages to remain charming and sympathetic even as he’s stealing his little brother’s allowance to pay for a fix. You want to shake Nic and ask him why he’s like this when he’s had so much given to him, but you never stop hoping that he’ll get better—a difficult feat when his own father eventually loses hope that Nic will ever recover. In less capable hands, Nic could come off as entitled or smarmy, but Chalamet never plays him that way, and he never lets Nic’s addictive tics slip into parody.

This isn’t to say that Beautiful Boy is perfect—the soundtrack is a real clunker, and it could use more Maura Tierney as Nic’s stepmother—but it is a well-made portrait of the way addiction affects a whole family, when similar narratives so often focus only on the addict. Are you there, Academy? It’s me, a Chalamaniac. Nominate him again!