At the beginning of 2019, a new rom-com will be released. It's called Isn’t It Romantic, and it stars actress and comedian Rebel Wilson as the lead. You might recognize Wilson from some of her other prominent roles in flicks such as Bridesmaids, Pitch Perfect, and Bachelorette.

Isn’t It Romantic chronicles the story of Natalie, an architect living in New York City who is constantly overlooked, despite her ambition. After an experience getting mugged in the subway, Natalie passes out and wakes to find herself at the center of a whirlwind romantic comedy, a polar-opposite of her normal life.

The film looks playful and cute, exploring the tropes of a traditional romantic love story, and the American standards of who would be an expected contender for such love to be bestowed upon. But an unexpected tension arose when Wilson was featured on The Ellen DeGeneres Show to talk about the upcoming movie and made a comment that didn’t settle well with many of the listeners: “I’m proud to be the first ever plus-sized girl to be the star of a romantic comedy."

Many people were quick to call Wilson out on the inaccuracy of this information, reminding her of films like Phat Girls starring Mo’Nique, and Beauty Shop, Just Wright, and The Last Holiday starring Queen Latifah. Other films like Babycakes starring Ricki Lake and Hairspray (2007) starring Nikki Blonsky come to mind as well.

Clearly, Wilson isn’t the first plus-size woman to star in a rom-com. While this could have been an overlooked or misinformed statement, the real tension arose following the call-out, and the way that Wilson responded. While many people took to Instagram, Twitter, and other platforms to reach out to Wilson and correct her mistake, Wilson began to block people, specifically women of color who were calling her out for ignoring the successful Black women whose footsteps she was following in. A hashtag even started: “#RebelWilsonBlockedMe.” 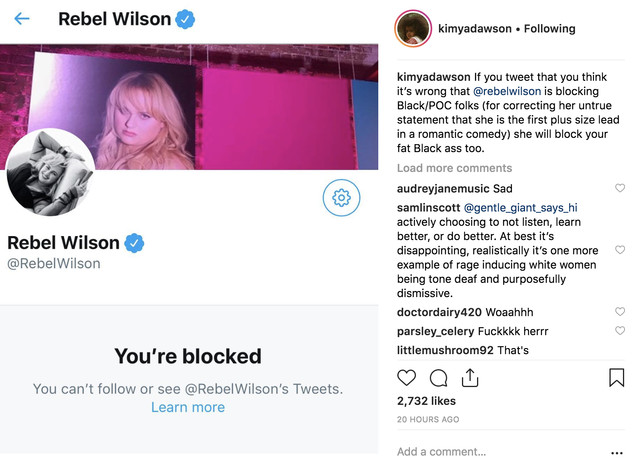 Wilson initially tried to defend her statement, posting on Twitter that it was “a slight grey area” because, “It was questionable as to whether... those actresses were plus-size when filming those movies” and whether “those films are categorized/billed as a studio rom-com with a sole lead.”

Unfortunately, this response is far too familiar, and an easy way out, as opposed to utilizing the moment to step-up and engage in direct dialogue and learning following a mistake.

Mo’Nique was one of the few who responded that Wilson engaged with. On Twitter, Mo’Nique states, "Hey my sweet sister. Let's please not allow the business to erase our talent with giving grey areas and technicalities. Take a moment and know the history. DON'T BE PART OF ERASING IT. I wish you the best." 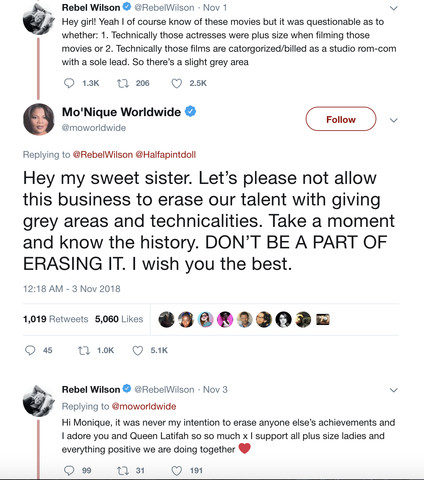 In Wilson's response, she says, "It was never my intention to erase anyone else's achievements and I adore you and Queen Latifah so so much... I support all plus size ladies and everything positive we are doing together."

It’s a complicated terrain, but ultimately this incident highlights a lot of the ways that the achievements of Black women and women of color are overlooked, and the importance of creating a space for this dialogue. White women in particular need to be open to receiving criticism and feedback. While white women, and especially those who don’t fit into the binary standards of Hollywood beauty, face many more obstacles on the path to success than white men, it’s important not to ignore the privileges and advantages that they also carry in a culture that is still deeply entrenched in racism.

We are all learning, and mistakes can be an opportunity to understand and witness one another. This incident is a reminder for all fellow white women the importance of using our voices, platforms, and privilege to leverage the voices of Black women and people of color, not silence them. These moments, while intense, are precious invitations to explore our own racism, short-sightedness, and the steps we can take to grow.

While we celebrate the success of Wilson, we celebrate her adding to a list of rom-coms that star plus-size women. She's certainly not the first, but her work continues to contribute to an important counternarrative that goes up against the Hollywood norms surrounding stories of love, romance, and desirability.

Update, 11/06/18: Wilson has released a statement apologizing for her comments on Twitter. She wrote, "In a couple of well-intentioned moments, hoping to lift my fellow plus-sized women up, I neglected to show the proper respect to those who climbed this mountain before me like Mo'Nique, Queen Latifah, Melissa McCarthy, Ricki Lake and likely many others. With the help of some very compassionate and well-thought out responses from others on social media, I now realize what I said was not only wrong but also incredibly hurtful. To be part of a problem I was hoping I was helping makes it that much more embarrassing & hard to acknowledge. I blocked people on Twitter because I was hurting from the criticism, but those are the people I actually need to hear from more, not less. Again, I am deeply sorry."

Rebel Wilson: “Not For Skinny Bitches”