The History Of The Modern Vampire 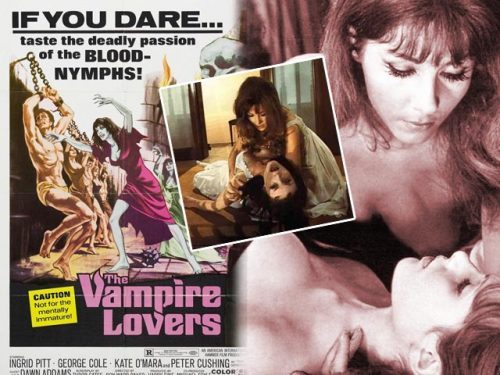 The myth of life-sucking demons has been putting the fright into ordinary folks for fucking ages (or centuries). Through varying incarnations and guises, these iconic undead killers have remained the stuff of nightmares. Pennywises and Freddy Kruegers come and go, but vampires are forever.

What lippie is that, babes?

So without further ado, let's take a look at the history of our favorite monster.

Arguably the earliest incarnation of vampires is the Ekimmu or Edimmu from ancient Babylonia (we’re talking from like 4,000 years B.C. here). The Ekimmu was a restless spirit of the dead who drained the blood and life-force of the living. They were said to be created from souls who met a violent end, or who weren’t buried properly.

And if you thought that after thousands of years, these suckers have flown off, you’d be mistaken! It’s said that the Ekimmu still live in big cities amongst the homeless, spreading death and disease…

THE LADY IS A VAMP: ESTRIES

Estries are an ancient vampire from Jewish folklore. They are female vampires who feed on the blood of the living and have the ability to shapeshift into animals, usually preferring the form of cats.

It’s basically reverse Sailor Moon…but with murder, and no dick in a top hat!!

To kill an Estrie, you had to decapitate and burn the corpse. This form of vampire extermination apparently works…because today decapitation and a good vamp bonfire are also referred to as effective ways to kill our more modern vamps.

Now, vampires in one form or another have been around in European folklore for hundreds of years, such as the Shtriga from Albanian folklore.

The Shtriga was a delightful vampire witch that sucked up the blood of babies and infants at night (nice!)

After eating, the Shtriga would turn themselves into flying insects (think moth, wasp, etc.) and fly the feck outta there post-meal without even leaving a tip.

Another vamp favorite from this corner of Europe is the Strigoi (which sounds like it should be a delicious pastry). These vampires hailed from Romanian culture and have fed heavily into our modern vampire mythos. The spirits of the dead, they drained the blood from living creatures and had the ability to transform into different animals. Not only that, but the jammy buggers could also turn invisible.

And for my next trick…

The best way to kill one was to cut the head off a suspected Strigoi corpse and to stab it in the chest with steel (because the Romanians are nothing if not thorough). The vampire slayer would then leave the vamp’s head between its knees or behind its bum. Which just seems rude.

We can thank the short story "The Vampyre" by John William Polder for our modern day vampires.Published in 1819, it tells the story of charming aristocratic vamp named Lord Ruthven who is a total shit to his mate Aubrey (probably because he is a 19th century aristocrat). Ruthann kills the girl Aubrey fancies and then goes after his sister. It ends with a blood-drained corpse and a missing Ruthven.

Next up came "Carmilla" in 1872, an amazing short story by Joseph Sheridan Le Fanu, WHICH, BTW, GAVE BIRTH TO QUEER LADY VAMPIRES! 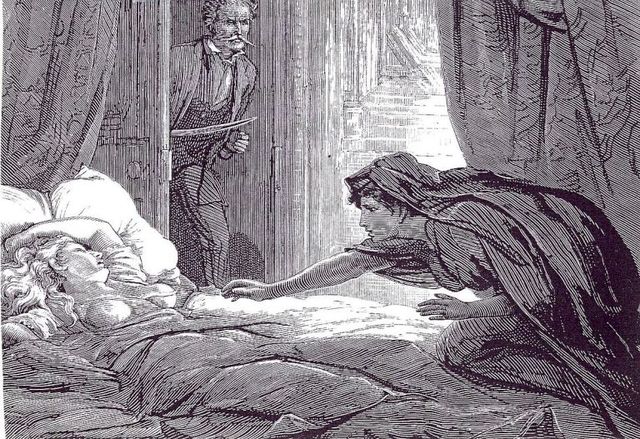 Carmilla trying to cop a feel…

Carmilla is a super sexy lady vamp who prefers to chomp down on and suck the life out of innocent young ladies. Sadly, although Carmilla is a trailblazer and future queer icon, it doesn’t end well for her. She gets a stake through the heart, then they cut her head off and burn her body… finally, they chuck the ashes in a river. Overkill much?

Bram Stoker’s Dracula, published in 1897, was heavily influenced by "The Vampyre" and "Carmilla."

Stoker elevated the modern vampire by taking the already established vampire mythos and building on it in a way that cemented it into the public’s consciousness:

When Dracula was released, it wasn’t an immediate hit. In fact, it wasn’t until silent nightmare vamp flick Nosferatu was made in 1922 that Dracula became more well-known.

The producers of Nosferatu wanted to do a faithful version of Stoker’s Dracula, but they weren’t allowed. Stoker’s widow was having none of it. To get around the fact they couldn’t use Drac, producers basically changed some names and tweaked the ending from the book, having their count vamp die in a sunlight related accident instead of getting staked.

Thanks to this, we now we know vamps hate sunlight. We also have the word "Nosferatu" as a word to describe vamps thanks to this film, too. Knowledge is power!

Thanks to Dracula’s and Nosfertu's success, everyone wanted a piece of the undead action. Universal had a punt at making the Dracula legend, with Bela Lugosi giving Drac that sassy European accent. Hammer Horror upped the sexy factor in their vamp films, thanks to Christopher Lee feeding on big-busted wenches; they also used Carmilla as an influence for some light lesbian vampire action.

Then you have Buffy, Blade, Anne Rice, True Blood, and our personal fave, the Underworld series (anything that puts Kate Beckinsale in PVC is a winner). Plus a million other vamp-inspired shows and books that all take lore and influence from Dracula & co.

Our worldwide vampire obsession continues to this day. Everyone loves a new vampire iteration.. unless you decide to make them sparkly, creepy and abusive bum nuggets. Also, BTW, no way would anyone in their right mind choose Pattinson over Lautner.

The History Of Your Sexy Halloween Costume

Tags: F Yeah History , vampires , Halloween , history
Support Feminist Media!
During these troubling political times, independent feminist media is more vital than ever. If our bold, uncensored reporting on women’s issues is important to you, please consider making a donation of $5, $25, $50, or whatever you can afford, to protect and sustain BUST.com.
Thanks so much—we can’t spell BUST without U.