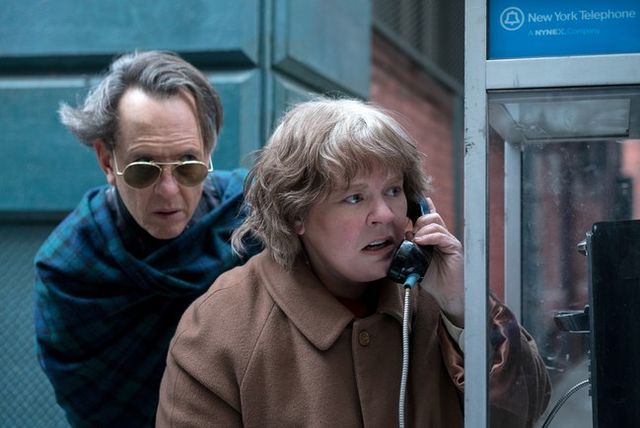 I think we can all agree that Melissa McCarthy is an extremely talented, extremely funny actress. From Gilmore Girls to Ghostbusters, she's proven her status as one of the best comedic actresses working today. But unfortunately, some of her recent movies haven't reflected that. Following a trio of terribly-reviewed movies released in the past year (the Happytime Murders, Life of the Party, and Cook Off!), McCarthy's latest film, Can You Ever Forgive Me?, should remind audiences—and studios—that she deserves better scripts and more interesting projects than what she's been working with recently.

A biopic that still has plenty of (dark) comedy, Can You Ever Forgive Me? stars McCarthy as Lee Israel, a writer who had some moderate success writing biographies in the '70s and '80s. But it's now the early '90s, and Lee is flat broke—and has alienated herself from the literary community thanks to her abrasive personality. After selling first a personal letter from Katharine Hepburn, and then a letter by vaudeville comedian Fanny Brice she found an old library book, Lee comes to a realization: people will pay a lot of money for memorabilia. And so she begins forging—and eventually stealing—letters by famed, dead wits like Dorothy Parker and Noël Coward. Eventually, she involves her friend Jack Hock (Richard E. Grant), a HIV-positive gay man who, like Lee, has fallen from former glory, in her scheme. As Lee creates more and more forgeries, she begins to have a few hesitations—especially while flirting with bookseller Anna (Dolly Wells), one of her first and most loyal clients. But it's not until the FBI starts investigating that Lee even begins to even consider stopping her scheme.

Directed by Marielle Heller, co-written by Nicole Holofcener and Jeff Whitty, and based on a memoir by the real Lee Israel, Can You Ever Forgive Me? lets McCarthy show a wide range of abilities, both comedic and dramatic. We laugh as she sneers at Tom Clancy or steals a jacket from coat check at a rich-people party; we feel for her as she talks about the loss of her only meaningful romantic relationship, with Elaine (Anna Deavere Smith), or scrambles to sell enough used books to make enough money to take her beloved, aging cat to the vet. As a biopic, Can You Ever Forgive Me? is a well-done, enjoyable film. And it's a brilliant star vehicle for Melissa McCarthy, who's earning deserved Oscar buzz for this role. Here, McCarthy proves she can do dark comedy and drama just as well as she does slapstick. Hopefully, her future movies will reflect that. (4/5)

Can You Ever Forgive Me? is out Friday, October 19.

Tags: Can You Ever Forgive Me? , Melissa McCarthy , Marielle Heller , movies , movie reviews