The Forgotten Story Of The Woman Who Created Color Film 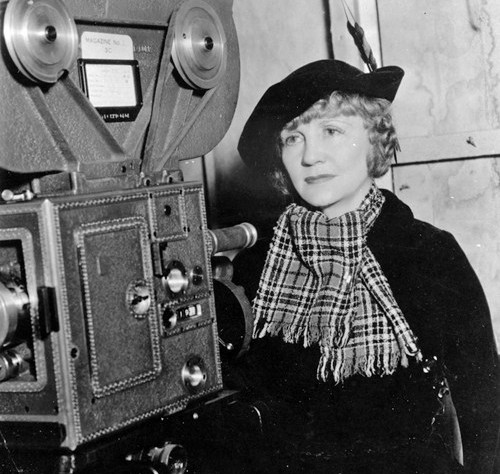 Natalie Kalmus was born in 1882 and has 404 credits on IMDB. Just to give you an idea of how incredible that is: Stephen Speilburg has 299 credits, Alfred Hitchcock clocks in at 204, and James Cameron has 151 (come on, James, get it together).

So who was Natalie Kalmus? And how did this woman, born before the Hollywood boom even existed, rack up such an impressive cinematic CV? 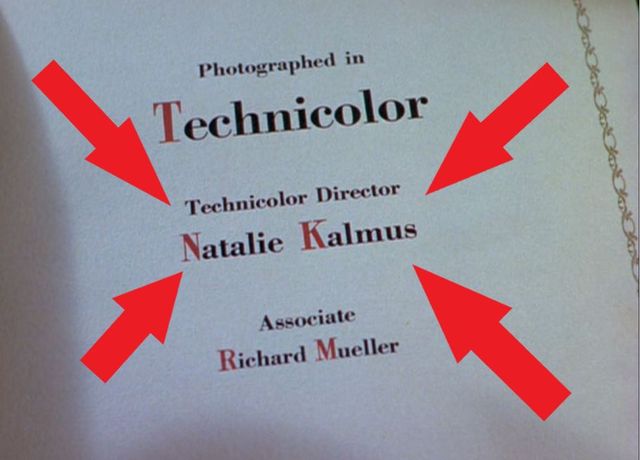 Seriously, watch any Technicolor film from the 1930s and 1940s, and you will see her name!

The Creation of Color Film

Natalie was married to Herbert Kalmus, who was the founder and president of Technicolor. A graduate of MIT, Herbert founded the company with several of his friends in 1914. Now, Technicolor was far from the the first color film technology maker. British company Kinemacolor had been the market leader since 1909, offering Hollywood tech for creating color film.Their system transformed black-and-white film by projecting it through alternating red and green filters.

An example of an early Kinemacolor film, 1908.

As you can see, there is color, but it's far from true-to-life.

Though there was scope for Kinemacolor to evolve, it was never going to move much past the heavy red and green hues. So Herbert Kalmus and his pals at Technicolor ditched the green red method and spent the next TWO DECADES trying to come up with a better way to make color film.

Sadly, everything Herbert tried was either ridiculously expensive, needed a ton of experienced people to operate, or just didn’t create the desired effect. But by 1932, Herbert had the system perfected! Essentially, this new system worked from start to finish, from using refracted light in the camera to bathing the film strip in colored dye. (This is a really basic description, click here for more detail.)

Finally, color film was a go! Sadly...nobody wanted it.

The Great Depression had just hit, and no one wanted to take a punt on Technicolor and its expensive services. This was not an economy in which to take a gamble!

That is, unless you were Walt Disney...

In 1932, Herbert Kalmus convinced Walt Disney to try out his new technology. Disney agreed, with the caveat that he had total monopoly of Technicolour until 1935 (classic Disney business move, smart and oh-so-scary).

The first animation from Disney and Technicolor was Silly Symphonies, Flowers and Trees, a short released in 1933. It was an immediate hit with both fans and critics. The worth of Technicolor had been proved, and soon enough, all major film studios were desperate to make the move to color.

The race to make the next hit color picture sounded like one hell of a payday for Technicolor. You see, studios couldn’t buy Technicolor equipment outright, they had to rent everything. This massively boosted the company's bottom line.

But there was one huge issue: Quality control.

The possibilities of what could be achieved with this level of color were endless, and as such, filmmakers were chomping at the bit to get to play with this new tech. They wanted to use all the crayons in the box, at the same time. As anyone who has ever seen a child’s drawing can attest—that is not always a good thing.

But one person stood between directors and the future of film looking like a toddler's psychedelic nightmare doodle.

THAT PERSON WAS NATALIE KALMUS. 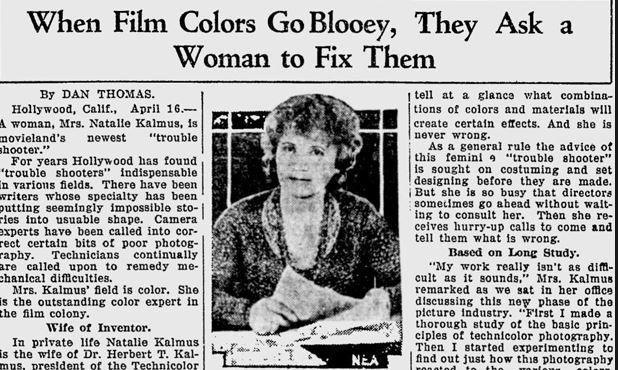 Meet Natalie and this totally not sexist at all newspaper article about her.

Natalie wanted to ensure that Technicolor lasted as both a company and an industry standard. She believed that color had the potential to be more than a money-grabbing fab, and could totally revolutionize film as an art form. But that couldn’t happen if filmmakers were able to just throw the entire kitchen sink at the screen!

So when you hired Technicolor equipment, you also had to hire Natalie Kalmus.

Natalie served as color supervisor on almost every Technicolor film from 1934-1949. A former art student and passionate art lover, Natalie was the perfect person to steer the future of color film. Although Herbert Kalmus and Natalie had secretly split by 1922 (though they continued living together), she’d been right there during Technicolor’s decades-long inception, often serving as its on-screen test model. There was nobody who understood the tech and its artistic capabilities better.

Rather than just throwing everything at the screen, Natalie wanted color to be carefully orchestrated through the film. In the same way that a film score underpins the story, emotions, and individual characters, so would color.

Through "Color Consciousness," Natalie asked the filmmakers working with Technicolor to delve through art history, looking at how these painters used colors to tell their stories. By doing this, Natalie was hammering home the importance of people’s psychological reaction to specific hues, as well as how good they’d look onscreen.

As an example, let's take The Wizard of Oz. In the film, Dorothy’s shoes are changed from their original silver, and not only because red will look better! Yes, they pop on that yellow brick road, but they also contrast as the polar opposite to the Wicked Witch's uncanny and sinister-looking green skin.

The ruby slippers are that particular shade of ruby red because it’s one that creates a feeling of lively fun, rather than just a few shades darker, which can conjure thoughts of blood. That’s a lot of thought put into what’s essentially a prop. But it clearly worked, because decades later, those shoes are still world-famous.

Natalie didn’t just boost a story's plot through color, she also made the whole film a visual feast. As we have covered, Technicolor was a totally new visual tech—and black and white methods for camera, art design, lighting, costuming, and well, everything else, would not work here. There was a lot of scope to get things wrong! Seriously, if color film isn’t done right, it has the capability to make some people actually feel physically ill (kind of like how 3D films did a couple of years ago…) Which was not going to happen on Natalie's watch.

So, once more, Natalie looked to art for inspiration and taught entire crews how to change their work to match this new tech. She showed art departments how to use a mix of warm and dark tones to make flat sets look deep. She taught lighting crews how to use shadow and colored lighting together. She schooled directors in working within in a specific palette to create a color scheme that didn’t detract but rather worked harmoniously to tell the story.

This is why the advent of color films gives us these gloriously detailed sets that used sumptuous costuming and the first use of color coding to set a character or mood.

If this sounds like big deal, it’s because it is. All of this is a HUGE part of the foundation for filmmaking as we know it today. 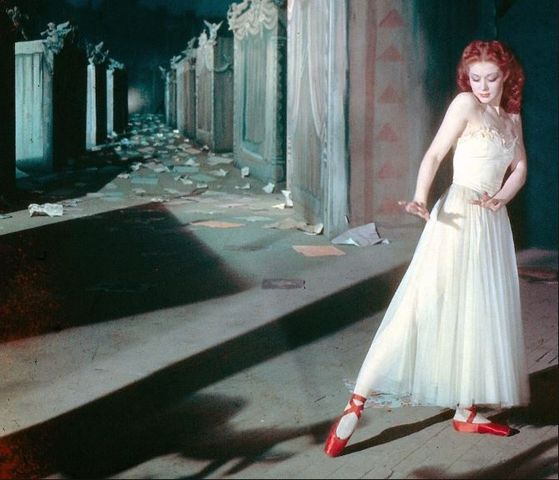 An example of Natalie's work on the 1948 film The Red Shoes. Seriously, go watch this film. It's bloody fantastic and every single shot is a piece of art in itself.

But not all of Hollywood's power players were down with Natalie and her new techniques. Much of this was due to the old boys' club not loving the fact that a woman was coming onto their set and having a say.

Add to that the fact that Natalie had no problem entering a shouting match with Hollywood’s leading male directors, and you have a powder keg just waiting to explode.

Thus, Natalie was loathed by the vast majority of the filmmakers she worked with.

David O. Selznick was so riled up by Natalie that he actually tried to have Gone With The Wind shot in black and white, just to get her off his set. Another filmmaker, Allan Dwan, later summed up his opinion on Natalie: "NATALIE KALMUS IS A BITCH."

Mighty big words you're throwing around there, Allan...

Did all this hate deter Natalie?

Instead of shying away, she built a huge department of color supervising specialists and led the charge in color filmmaking. Natalie had a direct hand in almost every color film made for over a decade; that's hundreds and hundreds of films! It's very much due to Natalie, her techniques, and her work that Technicolor was a success. It didn't die out as a fad, but proved that color was the key to making films. Not only bringing in crowds but becoming a vital tool in making GREAT cinema. This meant that studios were happy to continue paying more money to make color pictures over black and white, during economic low periods like WWII.

A classic example of Natalie's work, quite literally taking film from black-and-white to colour.

You may wonder: if Natalie Kalmus is so great, then why did she stop working and why haven't I heard of her?

1. The old boys' club finally won. By the late 1940s, Natalie had pissed off so many of Hollywood's powerful men that she gradually started to be removed from sets, working less and less as rumors of her "hysterical" outbursts spread. This was exacerbated by:

2. Her alimony case against Herbert Kalmus. Though Natalie and Herbert had split in the early 1920s, their break-up was pretty amicable, and they even continued living together. All was well until the 1940s, when Herbert decided to re-marry, essentially kicking Natalie out. Finally, she went to court in pursuit of alimony. After all, Herbert was a very rich man, and much of that wealth was thanks to Natalie—she wanted what was hers. Sadly, the courts didn't agree, and Natalie's case was thrown out. Upon the news, she broke down, begging the judge for justice. As she sobbed, photographers snapped away, and soon enough this was all over town: 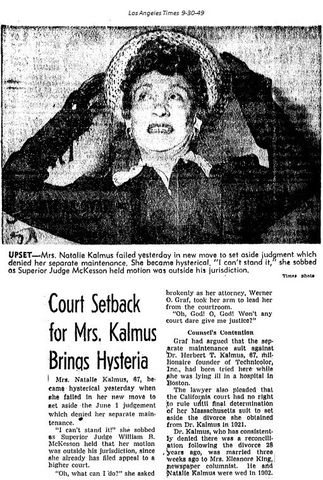 After the fallout of the trial and amidst the ongoing rumours of her "hysterical" nature, Herbert stripped Natalie of her job at Technicolor. Natalie never recovered from this career blow, and she didn't work in film again.

She died quietly in 1965, mostly forgotten by the industry she helped build. But Natalie's film legacy lives on. Her work was the building blocks for modern Hollywood. So, next time you watch a color film, be it Singing In The Rain, Gone With The Wind, The Red Shoes, or the latest blockbuster, thank Natalie Kalmus.

This was interesting, where can I find out more? Well, there's nobody better than the woman herself to show you how enduring Natalie Klamus' work is. I suggest you check out her amazing "Color Consciousness," which you can do HERE for free.