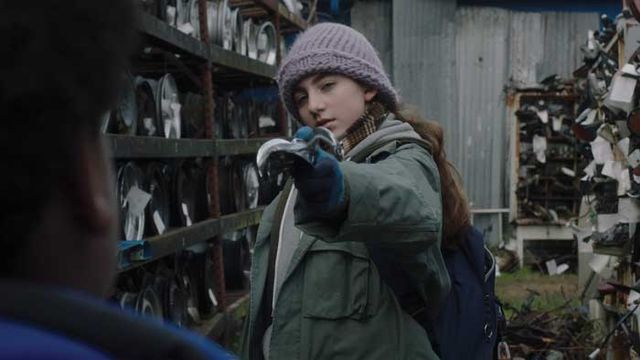 Sadie
Written and directed by Megan Griffiths
Out October 12

Seattle-based writer/director Megan Griffiths returns to the big screen with Sadie, a haunting coming-of-age story about a young girl struggling to accept her reality. For Sadie (Sophia Mitri Schloss), growing up in a military family is anything but easy. With her father serving multiple tours overseas and her mother (Melanie Lynskey) struggling to make ends meet as a nurse at the local hospital, Sadie is all too often left to navigate her teens alone. She spends her days playing violent video games that fuel her idolization of both her father and the military, and at night she fantasizes about a happy family reunion that her mother knows isn’t going to happen. Sadie’s world suddenly shatters, however, when she wakes to find Cyrus (John Gallahger Jr.), her mom’s new boyfriend, naked in their hallway. This event sets her off on a path of destruction, righting what she believes is wrong with the world, and resorting to deadly measures.

Griffiths explores prolonged exposure to violence in this gut-wrenching film that took nine years to make. And while the real-world debate rages on about whether or not video games lead to aggression, Sadie is much more than an extreme opinion on the matter. It’s a moving meditation on the consequences of brutish escapism. (4/5)

Tags: movie , Sadie , Megan Griffiths , Sophia Mitri Schloss , Melanie Lynskey
Support Feminist Media!
During these troubling political times, independent feminist media is more vital than ever. If our bold, uncensored reporting on women’s issues is important to you, please consider making a donation of $5, $25, $50, or whatever you can afford, to protect and sustain BUST.com.
Thanks so much—we can’t spell BUST without U.