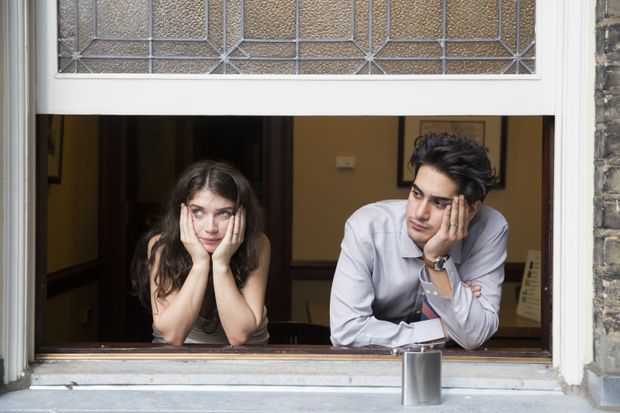 Apparently millennials are killing the divorce industry, along with the diamond industry, fabric softener industry, and Denny’s. So when Paper Year opens with the charismatically beautiful Dan and Franny (Avan Jogia and Eve Hewson) rushing through the halls of the drab bureaucratic government building where they’ve just had a quickie wedding, you want to shake your head and coo, “aww, I hope those crazy kids make it.” It’s not clear how long they’ve known one another or have even been together—or if they waited more than five minutes between the proposal and the drive over to seal the deal—but they’re young and giddy and animated by joy and love. And so Paper Year begins on that joyful note, but over the course of the next year (paper is the traditional first anniversary gift), Dan and Franny learn that marriage and commitment aren’t as easy as they would have thought. It all plays out in episodic vignettes that nonetheless all point towards a general downward trajectory in the fresh marriage of these two young people. In a meta way, you could argue that the neatness and propulsion of Paper Year’s narrative mirrors the strength and dissolution of their marriage. Perhaps that’s a formal choice by writer-director Rebecca Adelman, but maybe I’m trying to find a justification for why the film, much like Dan and Franny’s careening marriage, ends up treading water uneasily until the end.

Young people today are getting married later than their parents did, often because they want to get their own lives and careers settled first before embarking on a forever relationship with a partner. Dan and Franny, who are clearly meant to be in their mid-twenties, don’t yet have the financial stability most people their age would consider prerequisites before tying the knot. He’s a dog-walker and aspiring actor; she’s a writer hoping to break into television. As Franny’s mother (Andie Macdowell in basically a cameo role, but looking completely realistically like she could be Eve Hewson’s mom) cautions them about moving too quickly, wondering what they’re going to do about money. Franny shrugs off her concerns, floating in that haze of bliss where all you need is your partner. In what I assume must be a fairly lucrative industry for young people who don’t have steady jobs in Los Angeles, Dan gets a job house-sitting for (and walking the dogs of) a famous Hollywood starlet (Daniela Barbosa) who is going out of the country to shoot a movie. Dan and Franny crash there in the interim, enjoying sweeping views of the Hollywood Hills and pretending they belong there. Dan remains aimless as Franny gets a job as a writer for a game show that makes Wipeout look erudite; his general passiveness and her increasing focus on her work life create the first cracks in their marriage. Add in the troubling flirtations of Noah (Hamish Linklater), Franny’s colleague, mix in a little lying by evasion and miscommunication, and you have a playbook for how those two crazy kids grow up to realize they’re not meant to be.

It’s the relationship that develops between Franny and Noah where Paper Year shows the most teeth, digging into the murky ambiguous areas that arise when you find yourself attracted to a senior coworker. Noah, for his part, acts as a massive red flag as soon as he’s introduced, pretending to be a cool coworker who warns Franny that their arrogant boss (Brooks Gray) wants to sleep with her. His good-guy bona fides assured, he proceeds to lure Franny to a work cocktail night where—oops!—everyone but him cancelled. Over the course of the evening, he appears to push her boundaries bit by bit, calling her “cute” against her wishes, dropping hints about his former life as a New York City playwright, treating her with the precise amount of distance and playful condescension that seems right out of a pick-up artist’s playbook. So when, after far too many drinks, Franny begins driving home and sees Noah’s car following her steadily, the mood changes from playfully uneasy to downright terrifying—we think we know where this road goes. But in a twist that, in retrospect, really only feels like a twist in the moment, Franny has a vivid fantasy of herself hooking up with Noah—meaning that his getting-under-the-skin manner of flirting worked. She can’t get him out of her head; her trepidation changes to attraction like the flip of a switch.

Jogia and Hewson are entirely believable in capturing and portraying deep affection and adoration for one another, which makes it all the more affecting when their relationship breaks down. In the early scenes, their rapport feels natural, unscripted, improvisational. Jogia has less to do in Paper Year than Hewson, as her plotline requires her to cultivate a secret crush that she can’t push down—one that the also-married Noah is all too happy to let simmer and stew. Adelman sticks in a scene with a pregnancy scare at a crucial moment in the film where Franny’s attention is beginning to turn away from her husband, and Hewson ably captures a numb feeling of terror when Dan raises an objection to her going to get the Plan B pill. He wants kids; she’s not ready for them, and was she really supposed to take a gag list he wrote of potential names seriously? In that moment, the enormity of their commitment to one another feels like a massive, heavy weight as they realize they might not know each other well enough to have made this decision.

Jogia does, however, get the big emotional blowup moment that changes the course of the film definitively from awkward romantic dreamedy to straight-up drama. In a masterfully tense and downright painful sequence, Dan and Franny decide to play adults for real and host Noah and his wife (Rishma Malik) over for a dinner party; as Franny’s and Noah’s mutual (unacted-upon) attraction becomes evident, Dan’s lingering suspicion over this guy Franny keeps talking about from work boils over into a full-on drunk storm of resentment and jealousy. Franny’s humiliated, her wandering eye re-activated by Noah letting himself into the bedroom to read her writing, and in yet another drunken drive, she goes to Noah’s home later where they consummate their attraction half-in, half-out of a car in a truly excruciatingly awkward sex scene. Yet Franny isn’t the only one who’s strayed—not entirely, at least, since Dan finds himself attracted to the actress for whom they’re house-sitting.

In Paper Year, we watch a beautiful young couple go through an entire marriage cycle in a year. We watch Franny and Dan attempt to be adults in the way they’ve seen modeled around them, only to realize that they’re not as grown-up as they think, which has to be pretty relatable for everyone on the younger millennial end of the spectrum. Ultimately, when all is said and done, Paper Year is a slight, sun-dappled way to kill an hour and a half.

"Assassination Nation" Is A High-Powered Thriller For The Digital Age"

Tags: Paper Year , Rebecca Adelman , Avan Jogia , Eve Hewson , movies , movie review
Support Feminist Media!
During these troubling political times, independent feminist media is more vital than ever. If our bold, uncensored reporting on women’s issues is important to you, please consider making a donation of $5, $25, $50, or whatever you can afford, to protect and sustain BUST.com.
Thanks so much—we can’t spell BUST without U.